A few days ago, my friend Beth sent me a link to what seemed an unbelievable aviation story:

Long-time readers of Fear of Landing will recognise the story immediately: I wrote about it in 2014. At the time, I concluded that there was no crocodile on a plane and, if there was, then it didn’t cause the crash. I’ll go over the details in a moment but first, let’s look at the new information that has put the controversy to rest.

The Boing Boing article does not link to any other reference, a trend in modern online news that I’m finding extremely frustrating. It’s almost as if they don’t want us to check their sources. But according to them, a newly released final report categorically states that the passengers panicked in response to a crocodile on board.

Controversy surrounding the cause of a 2010 airplane crash that killed 20 passengers has now been put to rest.
“Loss of control on final approach was due to the movement of several passengers in the cabin, panicked by the presence of a crocodile,” states the final official report that was just completed.

I was briefly excited. What final report, where?

It did not take long to conclude that there is no final report. The only other source in the article is a quote from an MSN article, which says

But now investigations have found the real cause was a crocodile, magazine Jeune Afrique revealed.

MSN’s explanation is that everyone followed an air hostess trying to find safety in the cockpit. They refer to a single source: a pan-African news magazine founded in Tunis and now published in Paris. 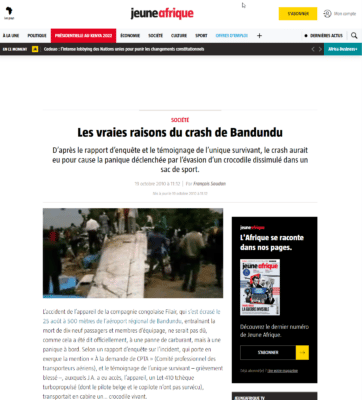 But this isn’t new news; Jeune Afrique hasn’t revisited the case. There is only the one article on the subject. So “But now investigations have found the real cause” turns out to be an expose piece published by the Jeune Afrique tabloid twelve years ago. The only thing amazing about this is the imaginative use of the word “now”.

The tabloid website TMZ also refers to the final report and, intriguingly, they use exactly the same phrasing:

“Loss of control on final approach was due to the movement of several passengers in the cabin, panicked by the presence of a crocodile,” states the final official report that was just completed. Passengers are even said to have made a bid to enter the cockpit during the chaos.

No one actually points to this newly completed final report, for the simple reason that it doesn’t exist.

CROC AND AWE: Rampaging crocodile sparked plane crash that killed 20 after being smuggled on board and bursting out of bag adds a new twist:

All of the holidaymakers stampeded to one side of the tiny plane, throwing it dangerously off balance.

Posted on the 25th of August, the twelve-year anniversary of the crash, it might be the earliest version of the most-recent news run.

News18 Buzz also ran with the story but they were a bit more honest with their sources.

According to The Guardian’s report dated October 22, 2010, the plane crash might have been caused by an escaped crocodile. The report suggested that the reptile had been smuggled into the plane. When it escaped the smuggler’s captivity, passengers panicked, and the aircraft eventually plummeted to the ground. The incident happened in the Democratic Republic of Congo.

I cannot even start to imagine who decided that this was news; however, one fact is clear: there is no new information about this crash.

The aircraft was a Let L-410 Turbolet, a small turboprop designed by Let Kunovice in the 1960s as a replacement for the Antonov An-2. This specific model, the Let L-410UVP-E20C, was from the third series and had the seating capacity increased from 17 to 19.

On that day, there were two flight crew and one flight attendant. Modern media reports vary. According to the Radio Okapi report two days after the event that there were twenty on board, including the CEO of the airline. The Aviation Safety Network and Aviation Herald both list three crew and eighteen passengers (but could be using each other as a source).

So, we are looking at seventeen or eighteen passengers and a cabin crew member in the cabin of an aircraft which seats maximum nineteen. The flight was full. This photograph is an earlier model of the L-410 but the interior of the UVP looks much the same:

On the 25th of August 2010, the aircraft was inbound to Bandundu city airport but broke off the approach in the final stages and circled to approach the runway again.

However, on this second attempt, the aircraft turned and then crashed. It impacted an empty residence about 2 kilometres (1¼ miles) from the airport. An eye-witness reported that it “fell out of the sky like a leaf”.

This sounds like a stall. This type of stall is common in the turns leading to final approach, where the flight crew allow the aircraft speed to drop as they over focus on their position. Noteably, there is no report of a nose dive and no photographs of a crumpled nose, which would normally catch the photographers’ attention.

The crew and most of the passengers died on impact. Two passengers survived the crash but one died after being transported to the local hospital.

Initially, reports were that the aircraft had run out of fuel, apparently based on the fact that there was no explosion. The airline confirmed the following day that fuel had been recovered from the tanks.

The lone surviving passenger, interviewed in hospital directly after the crash, said that the pilot was landing on the reserve strip next to the airstrip instead of the main runway. She said that the passengers saw that the aircraft nose was not pointing towards the runway and they began to shout and rushed to the cockpit. The aircraft became unbalanced and then crashed into the house.

I’ll draw your attention to the image of the interior of the aircraft. How, I wonder, could 17-18 passengers push their way through the cabin into the cockpit, even if they somehow decided this was the best course of action.

To be fair, the passenger was still in critical condition and in intensive care. She was clearly not in the best state to explain what had happened, if she even understood it.

I couldn’t find any evidence of a reserve strip at that airport in 2014, but it is badly documented and could have existed at the time. I’m still not sure how the passengers would know which strip the pilots were flying towards or why they would stampede towards the cockpit as a result. I also can’t see that they could all squeeze into the front via that tiny aisle.

Now, this is the only _official _statement collected from the surviving passenger. The black box was collected; however, nothing more has come of this. At the time, airlines based in the Democratic Republic of Congo were banned from flying in the European Union for safety concerns and a lack of confidence in the DRC aviation authority. This ban is still in place. The lack of a proper investigation is not a surprise.

That brings us to the Jeune Afrique headline, published a few months after the crash. The piece refers to an investigation report but the focus is their interview with the surviving passenger, whose name they did not disclose. She told a different story, this time. There was now no mention of the reserve strip. Instead, the panic was caused by a crocodile in the cabin.

A dwarf crocodile is over a metre and a half long. A full sized saltwater crocodile can reach over five metres (17 feet) in length. It could have been a baby crocodile, dashing under the seats and terrorising the passengers like a scaly chihuahua, I suppose.

The article says that the crocodile survived the crash but was then chopped up by a machete and that a video shows him quietly emerging from the debris of the crash. No such video has ever been shared.

Tucked away at the end of the article is a statement from the DRC aviation authority that they have not commissioned an investigation, which means that there is no official report on the accident.

This story was picked up by tabloids around the world. However, outside of this single piece, no one has ever found any independent verification; it all points back to a single article in Jeune Afrique.

The news cycle moved on and the crocodile seemed to be forgotten. However, the first officer of the flight held British citizenship and in 2014, the inquest into his death was held in the UK. The Assistant Coroner read out an email written by the First Officer’s father. In the email to the Congolese officials, the grieving father explained that he had heard that there was a crocodile on board which caused the passengers to panic and that the resulting weight shift may have caused the plane to go into a nose dive.

The same inquest also reported that the aircraft might have been sabotaged by a rival company competing for business.

No evidence was given for either rumour. An air accident investigator testified that he found it unlikely and that he believed the aircraft had stalled or was in a spin before it impacted the building. “Essentially, it fell out of the sky.” The investigator is quoted in a with a headline of Panic over escaped crocodile could have crashed plane, inquest hears.

This was in 2014. There has been no additional information on this case since then. None. Zilch. Zero.

That brings us to now. On the 7th of August 2022, Simple Flying ran an article about the case: The Strangest Plane Crash Ever? How An Escaped Crocodile Downed A Congolese Turboprop In 2010. The article conveniently assumes that the aircraft came down nose-first. Based on this, the author concludes that it is possible that that when all the passengers ran forward, the center of gravity shifted and the aircraft pitched down and crashed. The article has a photograph of the interior and invites the reader to imagine a crocodile running through the interior. The author did not, apparently, try to imagine the passengers running in this same cramped space.

The article includes a Creative Commons photograph of a crocodile with the following caption:

Accident investigators determined a crocodile (similar to this one) caused panic in the cabin and lead to a tragic weight-shift accident.

This article, with a dubious reference to accident investigators, was posted just a few weeks before the most recent media furore.

So here’s what we have:

I suppose it makes an interesting case for modern media studies, if nothing else.