This Is a Work Safe Title

It was a quiet, sunny day in Okanogan County in Washington with a blue sky that seemed to go on forever. But then, something unexpected appeared.

The most monumental thing to happen in omak. A penis in the sky pic.twitter.com/SM8k1tNYaj

Some were amused, some were horrified, most were quick to get out their phones and take photographs of the sky drawing that loomed over them. There was no mistaking what it was meant to represent.

Complaints were made to local police, who I am sure had no idea what to do about it. The FAA was contacted but they just shrugged their shoulders, explaining that as the sky writing did not pose a safety risk, there was nothing they could do about it.

However, the contrails were in a training area used by nearby Naval Air Station Whidbey and a Navy official soon stepped forward to admit that yes, it was one of their aircraft involved in the skywriting that lingered in the afternoon sky.

An official information dispatch was swiftly sent to the office of the Chief of Naval Operations:

Aircrew maneuvered an EA-18G aircraft in a pattern that resulted in contrails depicting an obscene symbol when viewed from the ground. Media attention is expected. 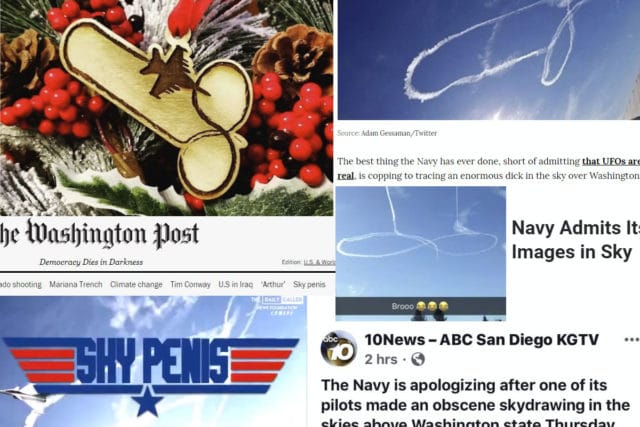 Thus began a military investigation like no other. And luckily for us, the Navy Times picked up a copy of the final results through the Freedom of Information Act and released the best bits: The Navy’s probe into sky penis

Naval Air Station Whidbey Island is the premier naval aviation installation in the Pacific Northwest and the base of the Navy tactical attack squadrons flying the EA-6B Prowler and the EA-18G Growler. Developed by Boeing, the Growler is an electronic-warfare aircraft, focused on dodging radar and radio systems by using radar jamming and deception. One of the first examples of an electronic-warfare aircraft dates to 1943: the Lancaster, a heavy bomber used in the second world war, dropped small strips of aluminium to generate clouds of radar echoes to blind enemy radar systems.

Electronic warfare is a wee bit more technical these days and the Growler carries a vast array of sensors and weapons including reactive and pre-emptive jamming capabilities.

Electronic Attack Squadron 130, known as the Zappers, is the oldest electronic warfare squadron in the Navy. They fly Growlers from the aircraft carrier USS Harry S Truman at NAS Whidbey.

That day, two junior officers from Electronic Attack Squadron 130, a pilot and an electronic warfare officer, were flying a Growler under the callsign “Zapper 21” for a 90-minute training flight. The names and personal details of the two officers were not released, other than that the pilot was male which, uh, we could have guessed. The commanding officer of Electronic Attack Squadron 130 described the pilot as a shy introvert and the electronic warfare officer as his best junior officer.

They departed Whidbey and had completed their training but still had some time left to fly. They noticed that their contrails were “particularly robust” that day. The cockpit video recording system logged the conversation between the electronic warfare officer (EWO) and the pilot.

EWO: Draw a giant penis. That would be awesome.
Pilot: What did you do on your flight? Oh, we turned dinosaurs into sky penises.

So it appears to have been the EWO’s idea. But the truth is, the pilot didn’t need much persuading.

EWO: You should totally try to draw a penis.
Pilot: I could definitely draw one, that would be easy. I could basically draw a figure eight and turn around around and come back.

The pilot later said that they didn’t realise that the sky writing would remain visible long enough to be visible from the ground, although they did laugh at the thought of the reactions from airliners arriving at Seattle-Tacoma Airport. But truly cringe-worthy is their attention to detail as they create their masterpiece with military precision.

Pilot: Balls are going to be a little lopsided.
Pilot: Balls are complete. I just gotta navigate a little bit over here for the shaft.
EWO: Which way is the shaft going?
Pilot: The shaft will go to the left.
EWO: It’s going to be a wide shaft.
Pilot: I don’t want to make it just like three balls.
EWO: Let’s do it. Oh, the head of that penis is going to be thick.
Pilot: To get out of this, I’m going to go like down and to the right and we’ll come back over the top and try to take a look at it.
EWO: I have a feeling the balls will have dissipated by then.
Pilot: It’s possible.

They later said that they didn’t expect their artwork to be visible from the ground. But the contrails remained nicely in place on that clear and clearly windless day.

As the flight crew backed off to take a look, they couldn’t contain their enthusiasm.

They took photographs and waited to see if the other Growler would notice. “Your artwork is amazing,” came through on the radio.

The pilot flew a pass across his masterpiece, hoping that he could “scribble it out” with his contrails. “That pass was ineffective,” he later said. Running low on fuel, there was nothing for it but to return to Whidbey. Both deleted the photographs they had taken and hoped against hope that would be the end of it.

Meanwhile, the deputy commodore of Electronic Attack Wing Pacific contacted the XO of the squadron for a friendly chat. The XO confirmed that yes, there had been squadron jets in the area that afternoon at which point the deputy commodore emailed photographs of the “sky penis” to the XO. I can just imagine the look on his face as he opened up the attachments.

The XO tracked down the flight crew and politely asked if anything unusual had happened during their flight that day. To their credit, the pair immediately admitted what they had done. The squadron’s commanding officer was furious but the pair had two points on their side: neither had any history of disciplinary problems and they only embarked on their artistic escapade after the training was completed.

According to the San Diego Tribune, they were immediately grounded. A spokesman has since confirmed that as a result of the investigation, the pair had been disciplined but would retain their wings, subject to a probation period with no further …mishaps.

The aviator-artists were lucky. The concluding notes as quoted by the Navy Times makes it clear that they didn’t really see the funny side of it.

While the sky writing conducted by [names redacted] was crude, immature, and unprofessional, it was not premeditated or planned and not in keeping with their character demonstrated prior to the incident.

Even so, it has caused the United States Navy severe embarrassment in the public arena and jeopardizes the strategic narrative that underpins the justification of the flight hour program.

Additionally, the absence of relevant, effective, professional training highlighted by the sophomoric sky drawing indicates a potential waste and misuse of government resources.

One thing that pleased me was that the investigation also interviewed other personnel specifically to discover whether the prank reflected larger problems in the squadron. However, they found no evidence of poor command climate and no allegations of overt sexism or misogyny.

You can find the Navy Times article here for further detail.

The pilot admitted that he had no excuse for his actions. “My initial reaction was no, bad! But for some reason still unknown to me, I eventually decided to do it.”

Do aviators in the Navy really get silly nicknames like they had in Top Gun? If so, I can only imagine what this guy’s is…