The Man Who Ate a Cessna

It’s clear by now that I’m obsessively rather interested in planes but not in a weird way. I usually limit myself to considering how they fly, how they look while they are flying, and how they sound when they pass overhead. I’ve never actually considered how they taste.

One man did, however. Michel Lotito, a French entertainer, was famous for eating things that most people would not consider edible. He was known as Monsieur Mangetout (Mr. Eat Everything).

Michel Lotito was born in Grenoble in 1950 and, as a small child, was described as “eating unusual material”. It’s now clear that he suffered from pica, a disorder which is defined by the persistent eating of substances such as dirt or paint which have no nutritional value. It’s considered a behavioural condition and childhood treatment involves training in which foods are edible and which foods are not through the use of positive reinforcement.

The condition is considered dangerous because of the side effects. Many of the items considered edible by a child suffering from pica contain toxic substances such as lead. Lack of nutritional food can lead to nutritional deficiencies and anemia. Objects that cannot be digested can block the digestive tract and hard or sharp objects can cause internal tearing.

Pica is most commonly a childhood condition and typically lasts for only a few months, although it is most well-known for its occurrence in pregnant women who experience cravings for dirt or other inedible substances. There is evidence that it can be linked to mineral deficiencies.

In the case of Michel Lotito, it was not a temporary condition. He started eating metal compulsively at age nine. He claimed that eating metal was no problem although bananas and hard-boiled eggs made him sick. He first performed publicly in 1966.

He was paid for his performances of eating metal and glass objects, which may explain why he never grew out of it. By October 1997 he’d eaten nearly nine tons of metal in public. Over this time he ate:

Disbelieving doctors subjected him to x-rays and other tests and confirmed that he was eating the indigestible objects. Apparently his stomach lining was twice as thick as expected, which sounds like it may have been an unfair advantage. It was also considered that his digestive juices were unusually powerful, which is why soft foodstuffs made him feel ill.

This four-minute video shows him in action, with an evening meal of salad, razor blades, lightbulbs and a side-order of screws:

He limited his metal intake to one kilogram per day, so larger items required multiple sittings. He would break down the object into small chunks of metal and then dip the chunks into mineral oil before enjoying his meal with plenty of water. The oil, he said, helped the metal to slide down his throat and he swore he never had any problems “passing” his unusual diet.

There is no medical explanation as to why he never tasted a low-wing aircraft.

A year later, in 1981, he was attacked and stabbed (allegedly over a woman), resulting in life-threatening injuries. He underwent major surgery. Three weeks later, he ate a robot. 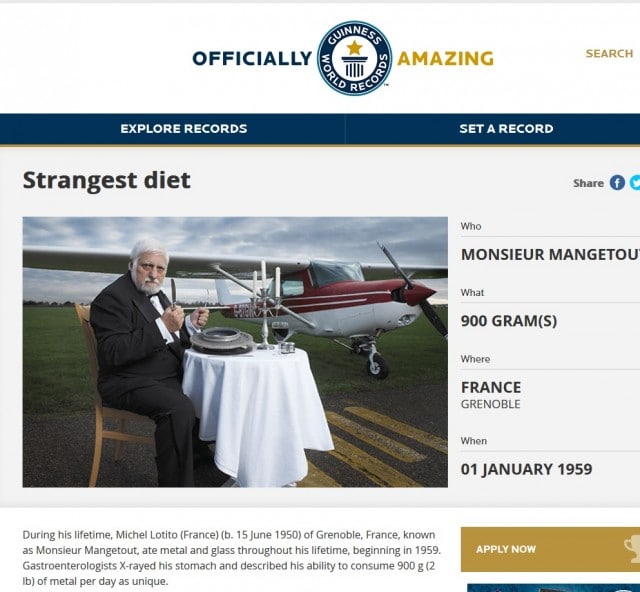 His eating habits got him an entry in the Guiness Book of Records, where he still holds the record for Strangest Diet. The publishers presented him with a brass plaque. He accepted the plaque and ate it.