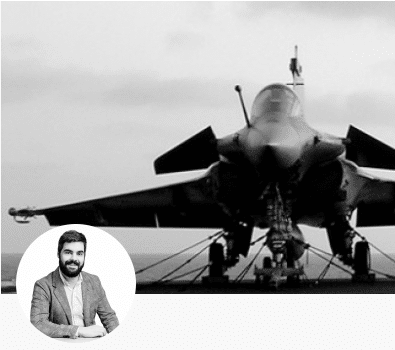 Last Wednesday, aviation journalist Clement Charpentreau at Aerotime News shared this hard-to-believe French report involving a French civilian who managed to eject himself from a military jet on a surprise flight given to him as a retirement gift. I loved it and wanted to share it with all of you, so I mailed Clement, who was kind enough to allow me to reprint his brilliant translation and summary of the accident report. What I didn’t expect was that everyone else would think exactly the same thing, leading to the story running in various publications all over the world. Even my mother sent me a link.

Still, maybe not everyone has seen it and besides, most of the articles are a quick summary of the situation. I still think it is worth reading Clement’s original translation of this military mishap in which a civilian managed to eject himself from a Dassault Rafale B.

The gentleman in question worked for a defence contractor (I can’t help but wonder if it was Thales, where I used to write science fiction for workshops on innovation). It’s pretty unbelievable; one of my favourite things about Clement’s translation is how he slowly shifts from “passenger” to “victim”. If you read French, you can download the original report from the BEA

On March 20, 2019, a civilian passenger was accidentally ejected from a twin-seat Rafale B fighter jet as the aircraft was taking off from Saint-Dizier 113 airbase, eastern France. The final report of the French investigation bureau for State aviation safety (BEA-E) on the incident outlines a chain reaction of both human and technical failures, one of which unexpectedly prevented the fighter jet from crashing.

The civilian passenger, identified by the report as a 64-year-old employee of a French defense manufacturer, was offered a discovery flight on a Dassault Rafale B fighter jet as a surprise by four of his colleagues, including a former pilot of the French Air Force that organized the gift.

Journalists or elected officials are often invited to take part in “observation” flights approved by the Ministry of the Armed Forces, for information and communication purposes. They must follow a strict procedure that includes a medical visit to the Center for medical expertise of flight personnel (CEMPN), and the approval of the Ministry.

However, this time, due to the “informal” setting of the flight, the usual protocol was not respected. Instead, the passenger was examined by a doctor four hours before the flight. He was declared apt to participate in the flight, under the condition that he would not be submitted to a negative load factor. That information was not communicated to the pilot.

The civilian was already nervous when he entered the cockpit, with his heart rate recorded between 136 and 142 beats per minute. The investigation found that the safety checks of the passenger had been approximate at best. He carried out most of his installation into the cockpit by himself. As a consequence, his visor was up, his anti-g pants were not worn properly, his helmet and oxygen mask were both unattached, and his seat straps were not tight enough.

Following orders of a regular training mission that involved two other Rafales, the pilot took off and climbed at 47°, generating a load factor of around +4G. Then, as he leveled off, he subjected his passenger to a negative load factor of about -0.6G.

“Discovering the feeling of the negative load factor, the insufficiently strapped and totally surprised passenger held onto the ejector handle and activated it unintentionally,” states the report. During the ejection, the civilian lost his helmet and oxygen mask. Due to a technical flaw of the seat, the dinghy failed to inflate, but fortunately, the incident happened above land. The passenger sustained minor injuries.

The BEA-E states that the absence of experience and the lack of preparation due to the surprise caused a lot of stress on the passenger, who had “never expressed a desire to carry out this type of flight, and in particular on Rafale”. The victim said he was given close to no possibility to refuse the flight from the moment it was announced to him. The social pressure of his colleagues also contributed to the stress.

Additionally to the mishandling of the passenger, the incident revealed something else: a malfunction of the ejection seat.

The fighter jet was set up to, under normal conditions, eject both the pilot and his passenger when one of them pulls on the ejection handle. The BEA-E explains the procedure of a Rafale double ejection in four stages: first, the back canopy is shattered by a line of explosives embedded into the glass, before the passenger seat is ejected. Then, the front canopy is also destroyed, and the pilot seat is the last to leave the fighter jet.

But in this case, the last stage failed and, despite his canopy being ejected, the pilot remained in his seat. Local media reported at the time that the glass of the canopy had slightly injured his hands. Nonetheless, he remained master of his aircraft. “He then remained calm to pilot his plane despite the multitude of failure messages that the on-board computer displays and an unusual aircraft centering following the loss of the rear seat and the canopy,” says the investigation, which analyzed the radio recordings.

Strictly following the safety procedure, he set his transponder on 7700, avoided flying over inhabited areas, dumped fuel and landed successfully back at the airbase. He then evacuated the cockpit by himself, fearing that the ejection seat could activate at any time. A safety perimeter was established around the Rafale for 24 hours, after which the ejection seat was defused.

The technical investigation found that the explosion ruptured the casing of the sequence selector supposed to trigger the pilot ejection seat. As for the uninflated dinghy of the passenger, it was obstructed by the incorrect folding of its container.

The BEA-E produced several recommendations in order to address both the unpreparedness of the passenger and the two technical flaws revealed by the incident. Among them, it reminded the military authorities and Dassault Aviation that a delay of 10 days should be respected between the medical visit and the flight, which gives enough time for the passenger to prepare both physically and mentally, as well as ensures medical recommendations reach the flight crew.

I love how petulantly the passenger victim says he never actually wanted a flight like this, especially not on a Rafale! I’d ask for his seat but not if I’m going to get thrown out of the plane mid-flight!

I’d like to thank Clement and Aerotime one more time for allowing me to share his great article. If you want to make my day, tell me that you hadn’t already read it elsewhere. :)