Every year, I look forward to the Archie League Medal of Safety Awards, an annual event to honour exceptional air traffic controller work in the previous year. In the past, I have collected the information and written about the event; this year, I’m happy to see that NATCA has written a great narrative that I’m happy to share with you.

FedEx flight 1026, a Boeing 767-300 registration N146FE with two crew members on board, was travelling from Newark, New Jersey to Los Angeles, California. They were on approach when they realised, they had a problem.

Here is the audio from the the crew of the FedEx dealing with Los Angeles International air traffic controllers:

Around 3:30 a.m. on Aug. 19, 2020, the crew of FedEx Flight 1026 (FDX1026), on approach to Los Angeles International Airport (LAX), notified LAX member Scott Moll that they needed to conduct a go-around due to an unsafe landing gear indication. As any tower controller can tell you, this isn’t uncommon and usually ends with the pilots taking a little time to work out the issue and then returning for an uneventful landing.

With that in mind, and adhering to normal procedures, FDX1026 was vectored out over the Pacific Ocean to work the problem. At this point, numerous challenges began to present themselves for this flight. The first was relatively small. After some time, the pilots asked for a low approach at 1,000 feet over the runway to get a visual confirmation as to the status of the gear. But the darkness and the height of the aircraft above the tower made it nearly impossible to confirm what Moll and his ground controller, CJ Wilson, thought they saw. The left main landing gear appeared to be retracted.

Moll began to coordinate a second low approach with Southern California TRACON (SCT), this time at 300 feet above the runway. Wilson and Moll coordinated with airport operations to get vehicles on the field, and with another FedEx crew that had just landed, to assist in visually inspecting the landing gear to ensure as many eyes as possible would be on that aircraft as it made a low approach. It was confirmed: the nose and right main gear was down but the left main gear was still up.

Another large challenge appeared at this point. Having exhausted all their options, the crew of FDX1026 determined they would have to attempt an emergency landing. The two controllers knew that the workload in the tower was about to increase exponentially. So, they recalled Jeremy Hroblak back from his break to conduct the immense amount of coordination and communication associated with the controller in charge position.

The crew of FDX1026 requested the longest runway at LAX, runway 25R. But another challenge presented itself because the runway was closed due to the city venting gas from a complex on short final for that runway. None of the three controllers on duty that night had ever seen the city do this venting procedure before, or since. But on that night, it had an impact.

When Hroblak arrived in the tower, he coordinated with the city to halt the venting and make runway 25R available for the stricken Boeing 767.

Yet another issue had been lingering for nearly a week prior to Aug. 19. The crash phone, used to summon the Aircraft Rescue and Fire Fighting crews, was out of service, which complicated the required, and urgent, Alert 2 notification. An Alert 2 indicates that an aircraft is having major difficulties. Jeremy got in contact with the fire captain on his personal cell phone and utilized that means of communication throughout the event.

An immense amount of coordination occurred over the next few tense minutes leading to FDX1026 making an emergency landing on runway 25R, just after 4 a.m. The flight crew abandoned the aircraft on the runway due to the potential for fire, and both survived, though one did suffer a broken leg while using the escape ladder.

Despite the numerous challenges presenting themselves, Moll, Hroblak, and Wilson, through their skill and professionalism, were able to address them all, contributing to the most successful outcome possible.

The captain of FDX1026, Bob Smith, wrote a letter describing the event from his perspective. He concluded the letter by saying, “As we say at FedEx to a team member for a job well done … Bravo Zulu! Thank you for your professionalism, and for your significant contribution to an aircraft incident that, because of your actions, ended with a safe landing and minimal damage to our aircraft.”

NATCA is happy to report that the crash phone was repaired the very next day. 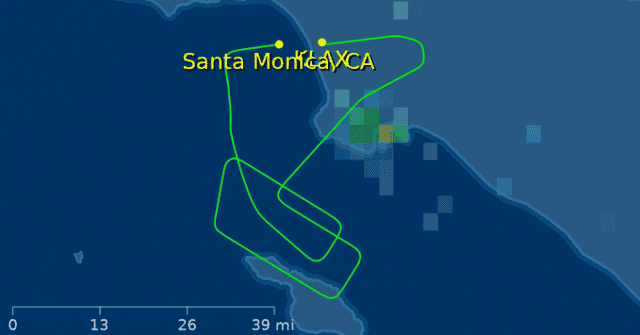 This footage from the Los Angeles Times shows the sparks flying as the Boeing travels down the runway, followed by the pilot falling to the ground after evacuating the cockpit.

You can read about all of the regional winners on the NATCA Archie League page. Every year, I’m a little bit more impressed with the effort that NATCA puts into ensuring that Air Traffic Controllers are recognised for their hard work under pressure.

The awards are named after Archie W. League, who was hired by the city of St. Louis in 1929 to direct traffic at Lambert Field.

He stood on the airfield and waved flags at planes to let pilots know when they could land, take off and when they shouldn’t.

NATCA consider Archie League to have been the first Air Traffic Controller. His tower was a deck chair and a wheelbarrow with a beach umbrella attached. The wheelbarrow also held his flags, lunch and water.

He was interviewed in 1973 upon his retirement from the FAA.

It took a while to educate some pilots. Several times my deck chair near the end of the runway was knocked over by planes that strayed from the proper path.

Another early controller at St Louis claimed that pilots purposefully buzzed the umbrella to try to knock it over.

League later joined the Bureau of Air Commerce and became vital to the growth of Air Traffic Services in the United States. You can read a short article about him, including a photo of League with his umbrella, on the FAA News Article: First Air Traffic Controller Remembered