Obviously right now the issue on everyone’s mind is the Metrojet A321 lost in Egypt. News is coming in faster than I can filter it and I strongly suspect that by the time I post this, the information will be out of date. Certainly, I’ve had to throw away one draft today already!

Let’s look at what we know so far:

Kogalymavia (Metrojet) Flight 9268 was en route from Sharm el-Sheikh International Airport, Egypt to Pulkovo Airport, Saint Petersburg, Russia. The aircraft was an Airbus A321-231 with 217 passengers and seven crew members on board. This was a holiday flight and most of the passengers were Russian tourists.

The flight departed Sharm el-Sheikh airport at 03:49 UTC (05:49 local time). The take-off and initial climb appeared to be uneventful. Twenty-three minutes into the flight the aircraft failed to make contact with Cyprus Air Traffic Control.

The aircraft wreckage was found in the northern desert of the Sinai peninsula, Egyptian territory which is a land bridge between Asia and Africa bordered by the Mediterranean to the north and the Red Sea to the south. There were no survivors. 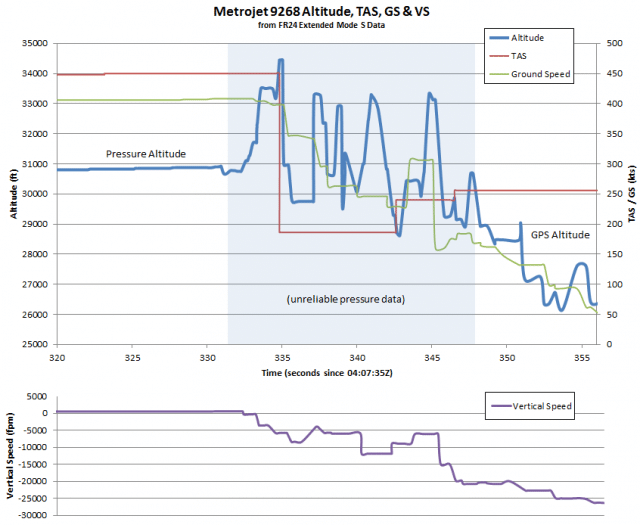 Flightradar24 data shows the aircraft climbing to 33,500 feet and then suddenly descending at a great rate before disappearing from radar screens.

So far the following is clear:

Investigators have confirmed that no distress call was made, contradicting early reports that the flight crew reported engine trouble. This would imply that whatever happened happened very quickly.

Russian medics stated that one-fifth of the bodies suffered severe burns and that “numerous bodies were severely fragmented” (sorry) which reaffirms that an explosive event took place.

I’m told that it is clear from the photographs of the wings that the fuel tanks did not explode until hitting the ground. Certainly, they appear to be relatively intact, which is not consistent with the fuel tanks exploding in flight.

The area behind the wings and the tail, on the other hand, are wide-spread on the wreckage site and largely disintegrated, which is why the assumption is that the event happened in this area.

Investigators have already confirmed that they do not believe that the aircraft was shot down by a missile based on their preliminary investigations.

I would think that it is relatively easy to discover if traces of explosives are on the wreckage, so I expect that a definitive answer will be available shortly.

Unfortunately, right now there are many, many announcements being made, some of which contradict each other.

One can imagine the politics involved. For the Egyptians, it would be best if the cause were a fault in the aircraft, rather than an act of terrorism which breached security at their airport. For the French, an act of aggression is not just the simplest explanation but would do much to justify the war on terror whereas a fault with the aircraft would be a great negative for the Airbus. The Russians, on the other hand, would not be unhappy to discover that the cause was an obscure technical issue with the aircraft and thus no blame can be assigned to their crew or maintenance. Obviously everyone involved in the investigation is committed to discovering the truth, but in the rush to explain the event, the officials from each country may be a bit too quick to release information which supports their preferred outcome.

On Wednesday, Britain, Ireland, Germany and the Netherlands suspended flights to and from Sharm el-Sheikh in order to review the security, with British officials specifically stating that they believed that the bomb may have been placed in the cargo hold while the aircraft was at the airport. They cited “critical intelligence” which according to the BBC was based on intercepted communications between militants in the Sinai.

An Egyptian investigator responded to say that although they believed that there was an explosion on board, it was not clear whether it was linked to fuel or engine trouble or a bomb.

The Russian foreign ministry responded as well, calling it shocking if Britain had evidence that they were not sharing with the rest of the world. At the time, Russian officials stated that they did not have evidence at that time that it was necessarily a bomb.

However, today Russia also suspended all flights to Egypt for security reasons, a turn-about that may well mean that there is evidence pointing in that direction. 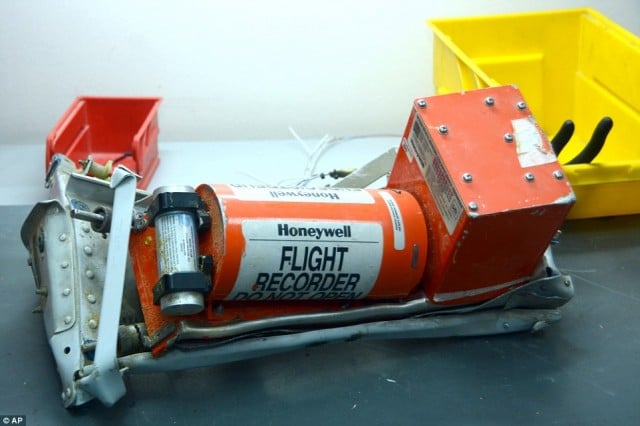 Meanwhile, French media are claiming that the black box data confirms that it was a bomb because the sound of an explosion could be heard shortly before the aircraft broke apart. However, the investigation team previously had stated that although the Flight Data Recorder had been extracted and validated, the Cockpit Voice Recorder was damaged and would take some time to find out if there was any data to be extracted. A separate French source states that the black box data simply stopped abruptly, evidence of a brutal and sudden event. That source did not refer to any sounds. No official information regarding the Cockpit Voice Recorder has been made by the Egyptian investigation team.

I’ve written before about an in-flight break-up caused by a fuel tank explosion that presented very much like a bomb, TWA Flight 800 in 1996.

However, I think the multiple heat flashes seen by the US satellite are more consistent with a bomb than a fuel tank explosion in the climb.

As of right now, the main new information coming through is about inbound British aircraft being turned away by Sharm el-Sheikh International Airport after reports that passengers must leave their luggage at the airport and travel with hand luggage only. As the Russians have now also suspended normal service but will be flying in to pick up stranded tourists, it must be absolute chaos there.

So, those are the facts as known at this time (Friday evening GMT). With the media reporting each others stories fast and furiously, I would definitely take anything with a grain of salt that is attributed to “sources close to the investigation” or “aviation officials”.