The Sight of Blood

When I first glanced at this accident report, I was surprised and unhappy that the UAE General Civil Aviation Authority seemed to be scolding the captain for what seems to me to have been an entirely logical response to an emergency. It wasn’t until I read the whole report that it became clear that the issue here was less the pilot (although he clearly did fail to follow procedure) and more the operator for having the questionable policy in the first place.

The incident itself is also interesting, as it is quite a strange case of pilot incapacitation, something Robert Dawson looked at in some detail in his post about risk assessment in The 1% rule and air disaster avoidance.

The aircraft was an Airbus A330-243, registration A6-EYN, operated by Etihad Airlines. On the 28th of June 2016, it departed Abu Dhabi International Airport at 02:38 local time on a scheduled passenger flight to Dublin, Ireland. On board the Airbus A330 were two flight crew, nine cabin crew and 201 passengers. 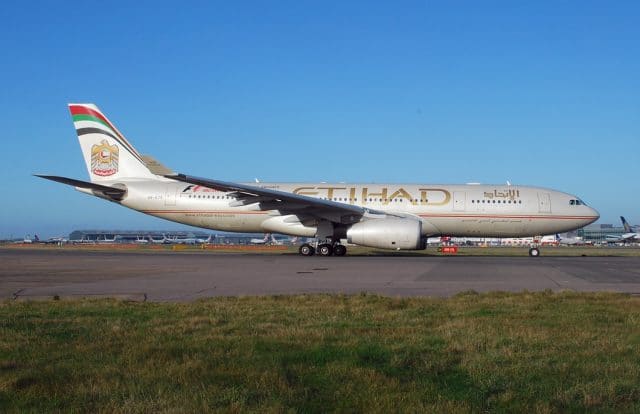 The captain was the Pilot Flying and seated in the left-hand seat. The first officer was the Pilot Monitoring. He had been off work for twelves days before the flight, having called in sick a week previous with flu and nasal congestion. He’d used over-the-counter medicine to clear the congestion, including aspirin and nasal spray. He stopped using the spray 24 hours before the flight.

The aircraft reached its cruising level of FL380 (38,000 feet). The first officer’s nose was congested and he was feeling the effects of the pressure, so he asked the captain for a box of tissues. He blew his nose hard into the tissue and then looked at it, as one does, where he saw a mixture of blood and mucus. He blew his nose a few more times, telling the captain that he wasn’t feeling well. Then his fingers and body started to tingle. He partially reclined his seat.

They were in Iranian airspace, about an hour into the flight, when he fainted and collapsed backwards into his seat with his eyes open. The captain tried to revive him, shaking him and calling out his name. The first officer was out cold.

The captain reclined the man’s seat further and pushed it back to make sure that the first officer wasn’t at risk of obstructing the flight controls. He then made an emergency announcement asking the Cabin Manager to go to the cockpit.

The Cabin Manager and another crew member also tried to revive the first officer. They put wet towels on his face and administered oxygen. After about a minute, the first officer came to but was not fully concious.

The captain called Tehran air traffic control with the distress message PAN-PAN, which signifies that there is an urgent issue which is not (yet) an emergency. He informed the controller that the first officer was incapacitated and that he intended to return to their home airport of Abu Dhabi. He asked the Cabin Manager to assist the Co-pilot out of the cockpit.

The Cabin Manager helped the first officer into the cabin, where he was checked by a medical doctor travelling as a passenger. The doctor confirmed that the first officer’s vital signs were good, other than his blood pressure was low. After about twenty minutes, the first officer began to feel normal again. He stayed in the business class seat next to the doctor for the rest of the flight.

Meanwhile, the Cabin Manager informed the captain that there was an off-duty Boeing 777 captain travelling on the flight as a passenger. The captain invited the pilot to the flight deck in order to help with ATC communications and checklists. He then briefed the Cabin Manager who made an announcement to the passengers, advising them that they were returning to Adu Dhabi.

The aircraft received priority clearance and at 04:54 local time the aircraft landed without incident. Airport paramedics met the aircraft at the parking stand and checked the first officer before transferring him to the airport on-duty doctor. The first officer was not tested for drugs or alcohol but instead released.

No one could find anything wrong with the first officer, although he should clearly had a toxology test. There is a lot of chatter at the moment about the effect of over-the-counter drugs, especially cold medicines. One thing that did come up as a part of the investigation, however, was that the first officer had previously fainted when given a blood test. He experienced the same tingling feeling at the time. The report concludes that his symptoms and lack of medical issues meant that it was likely a case of vasovagal syncope. This is a failure in the part of the human nervous system which regulates heart rate and blood pressure in response to a trigger. The heart rate slows and the blood vessels in the legs dilate. Blood pools in the legs which lowers the person’s blood pressure. The combination of the slowed heart rate and drop in blood pressure reduces the blood flow to the brain and the person faints.

This is triggered by hyperemotions such as panic or fright and it is not uncommon as a response to the sight of your own blood.

So as I understand it, the first officer blew his nose and fainted when he saw his own blood in the tissue.

Who could have predicted such a thing!

The first officer returned to flying duty a month after the incident after having been given the all clear.

The Air Accident Investigation Sector could not determine the cause of the Copilot fainting after he saw blood upon blowing his nose as the Investigation was informed that all post-incident medical test results had not identified any medical condition.

Possible contributory factors that may have affected the Copilot’s medical fitness included performing flying duties whilst he suffered from nasal congestion, the possible effects of the use of the over-the-counter nasal spray, medical fitness being affected by his biological clock, the effect of flying in a pressurized aircraft, and the psychological effect of seeing blood after he blew his nose, a condition that is known as vasovagal syncope.

Now, all’s well that ends well but what about the procedure?

The first issue is that the airline’s policy is that in the case of pilot incapacitation, the remaining pilot should declare an emergency and the aircraft should be landed as soon as possible. Instead, the captain did not declare an emergency and decided to return to Abu Dhabi, 400 nautical miles away, instead of diverting to Kuwait International Airport, which was only 105 nautical miles away.

However, the documentation available to the captain wasn’t very clear on this point.

The bigger issue at first appears to be that the Airbus captain brought a Boeing captain into the cockpit.

[The captain should] not have allowed the Boeing 777 captain into the cockpit, as he was not type qualified, and instead, [he should have] obtained the assistance of a cabin crew member.

Now Airbus vs Boeing religious wars aside, this is clearly a nonsense, as the cabin crew member would almost certainly also not be type qualified for an Airbus A330. But I think that this is simply badly worded. The actual issue was that the captain did not have the authority to invite the other pilot into the cockpit. 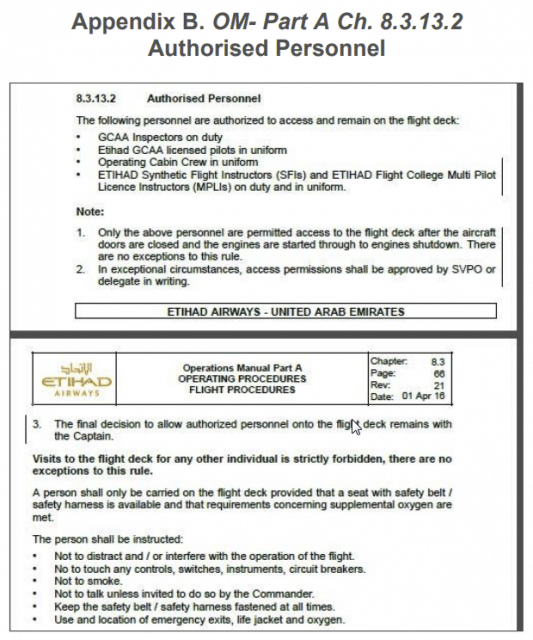 The Operations Manual specifically lists who is allowed on the flight deck.

Only the above personnel are permitted access to the flight deck after the aircraft doors are closed and the engines are started through to engines shutdown. There are no exceptions to this rule.

Now although the operations manual does instruct the flight crew to discreetly inquire whether there is a type-qualified pilot on board to replace the incapacitated pilot, there isn’t a specific restriction on allowing only type-qualified pilots on the flight deck. The manual says that only licensed company pilots in uniform are allowed, which, to be fair, the Boeing pilot was not.

The captain defending his decision, saying he felt that the off-duty Boeing pilot was a better option than utilising the cabin crew. The man was employed by the airline as a captain and more than competent to deal with communications and monitor checklists.

I tend to agree with him that that there are plenty of things a Boeing pilot can help with, even in an Airbus cockpit, which cabin crew are unlikely to be able to offer. But the fact remains that it went directly against company policy.

I’m interested to hear from you in the comments. Do you think the captain made the right choice? Should he have been disciplined?

What would you have done?