There’s been a lot of excitement around Byron Bailey’s article, The case for pilot Zaharie Ahmad Shah’s hijack of flight MH370. Once again, an apparent expert attempts to solve the mystery of Malaysia Airlines flight 370, this time by making it clear that Zaharie Ahmad Shah, the captain of the aircraft, must have hijacked the plane. Unfortunately, the article is big on rhetoric and small on facts.

The article starts with the question that torments us all.

The B777 is state of the art; probably the safest aircraft flying today. I know — I have many thousands of hours as captain on B777. How then could it disappear?

He then blithely dismisses “all other theories” as impossible in a single paragraph and tells us that there’s only one option left.

Really, that right there is a good hint to stop reading.

Apparently, he’s known this for quite some time and if we don’t believe him, well, there’s another pilot out there who says says the same thing.

Soon after the revelation that MH370 flew for more than seven hours to the southern Indian Ocean, I realised only an accomplished pilot could have managed this feat. The ATSB has ignored information coming from sources that should be considered expert.

Simon Hardy, a former British Airways B777 captain, wrote a book that almost conclusively identifies Zaharie as responsible for the hijack of MH370 and its flight to the southern Indian Ocean, which likely ended as a controlled ditching as per Boeing flight manual procedures.

Now I know that this is pedantic, but I don’t think you can accuse the Captain of hijacking the aircraft that he is in command of. But let’s accept that Bailey and Hardy both mean that he maliciously diverted the aircraft and carry on.

Bailey cites a number of supposed facts in order to bolster his solution to the mystery plaguing us all. The emphasis was added by me.

The aircraft suddenly turned westward over the South China Sea and flew a precise track — revealed by analysis of Malaysian military radar — across northern Malaysia. It avoided Thai military radar, then turned, after circling Zaharie’s home island of Penang, to the northwest up the Straits of Malacca and around the northern tip of Sumatra, avoiding Indonesian military radar, and eventually headed south.

Analysis of Malaysian military radar revealed the aircraft had climbed to 45,000ft as it tracked across northern Malaysia. The only reason for doing this would be to incapacitate passengers and cabin crew by hypoxia. Only pilots’ masks have selectable pressure breathing capacity.

When the flaperon was analysed by Boeing, the manufacturer said, along with US aviation safety consultant John Cox, that it had been broken off in a lowered position, consistent with the theory MH70 had made a controlled ditching into the sea. The ATSB initially said damage to the flaperon was consistent with a high-speed dive after flame-out. Later the ATSB changed tack to say damage to the flaperon still supported the flame-out theory but showed the aircraft glided uncontrolled to a soft landing on the sea (hence no debris). Really?

Please don’t be taken in by these arguments because quite simply: the “facts” that Bailey presents, specifically the phrases that I have bolded, are simply not true.

In a surprise move that is quite frankly a relief, the Australian Transport Safety Board has issued a press release to put to rest these issues once and for all.

An article, The Case for Pilot Hijack by Byron Bailey, appearing in the 9-10 January 2016 edition of The Weekend Australian, contained significant inaccuracies and misunderstandings about the ATSB’s role in the search for MH370. Many of those inaccuracies were repeated in subsequent items both in The Australian and other media outlets. It is important that the ATSB corrects the record.

They first, of course, dismiss the claims that the ATSB has a specific agenda or that they have rejected the possibility that a person took control of the aircraft.

They go on to deal with Bailey’s complaints that the ATSB is releasing “strange stuff” and not taking key evidence into account. The response to this is pretty simple.

The ATSB is not in charge of this investigation.

The ATSB is not investigating this accident although they are sharing any information they discover.

Now Malaysia invited the ATSB to support the investigation, along with the American NTSB and the British AAIB. This is a logical thing to do, because those three investigative bodies have a lot of experience and an amazing track record when it comes to accident investigations. In addition, Boeing, Inmarsat and Thales have specialists who have been invited to the investigation by the Malaysian government. The key fact here is that the investigation is the responsibility of Government of Malaysia and it does not show Bailey in a good light that he implies that the ATSB are investigating.

The aircraft passed the island of Penang, absolutely. But the idea that the aircraft circled Penang so that the Captain could say his final farewell to his birthplace was dreamt up by some journalist and continues to be circulated despite no evidence of any such action. The aircraft’s routing was still being tracked by Malaysian military radar at that time. That radar data shows that the aircraft never circled the island but simply flew past it.

The aircraft was not capable of flying at 45,000 feet at the speed recorded.

The Malaysian military radar did record values from 5,000 to 50,000 ft. These were subsequently found to be inaccurate and so were disregarded by the search strategy team. The speed throughout that section of the flight was consistent with maintaining approximately FL 300 (or 30,000 ft). At the known weight of the aircraft, flight at 45,000ft would not have been possible at the aircraft speed reflected in the radar data.

Boeing have not made an announcement that the flaperon had broken off in a lowered position.

I have no idea where Bailey even gets this one from. He lists three different statements about the flaperon which don’t appear to have ever been uttered. The flaperon is still with the French who have not released any results of their investigation. Boeing have not made any public statements regarding the state of the flaperon. The ATSB never stated that damage to the flaperon supported the flame-out theory.

None of these things happened.

The ATSB release ends on a very clear note.

The ATSB has neither the authority under international agreements nor the need for the purposes of its search to make statements about why the aircraft disappeared. The successful completion of our search, based on sound analysis of confirmed data and using the best people, equipment and techniques, is still the best chance of arriving at an answer to the mystery of MH370’s disappearance.

Here’s the conditions on Go Phoenix, one of the search vessels, taken last year in the southern Indian ocean. The two blue shipping containers on the deck are portable workspaces for the members of the search team. 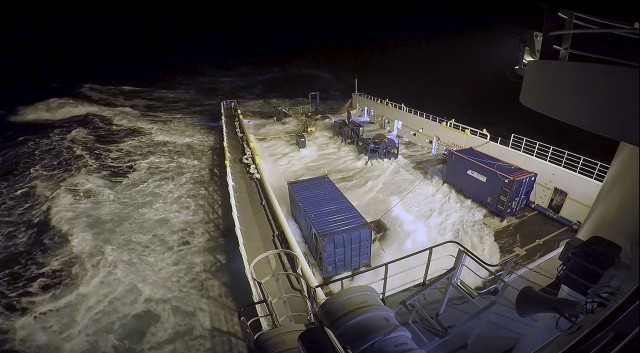 This is not the working environment of people who don’t give a damn.

Everyone would love for this mystery to be solved; especially every person involved in any way in the search and the ongoing investigation. To imply otherwise is, quite frankly, bizarre.

No one is claiming that the aircraft couldn’t have been the victim of hijack or a malicious diversion. The thing to remember is that it is one possibility out of many.

It’s frustrating for all of us to not have any answers. It’s coming up to two years since the airliner and all of its occupants disappeared. We want answers.

But to claim you know The Truth and everyone else just isn’t listening? That’s just one step away from putting on a tin foil hat. When you justify that theory with rumours that have already been proven to be false…

Well, all I can say is, I guess that’s another B777 captain and “journalist” whose work I won’t bother to be reading in the future.