The Galloping Ghost crashes into spectators at Reno NCAR

On the 16th of September in 2011, at the National Championship Air Races at Reno, Nevada, a small aircraft lost control and crashed into a spectator box. 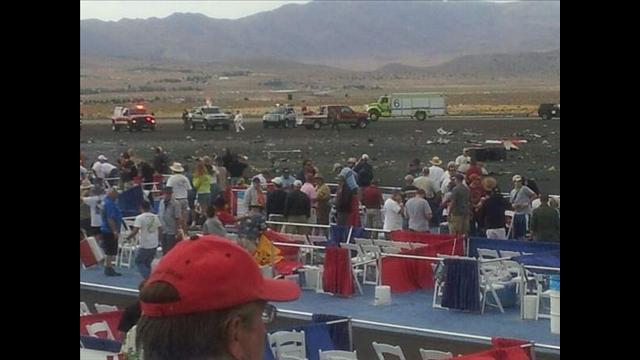 The Galloping Ghost, an experimental single-seater P-51D, was travelling at about 445 knots (512 mph) in the third lap of a six-lap race. 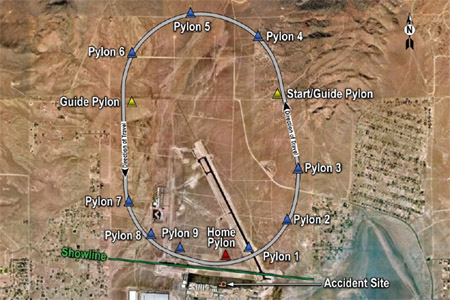 Coming past pylons 6 and 7, the Galloping Ghost was at 458 knots ground speed according to the GPS; the fastest that the airplane had flown on the course by about 35 knots.

As it passed pylon 8, it experienced a left-roll upset.

A “substantial right-wing-down aileron deflection was evident” which was probably the pilot’s last action to get out of the left roll.

The aircraft responded with a right roll but also pitched up. The vertical G-levels rose from about 3G to 17.3G, outside of human tolerances. The pilot’s time of useful consciousness is estimated at less than one second.

A section of the left elevator trim tab separated in flight. The airplane went into a spiral dive and crashed into a ramp in the spectator box seating area.

The NTSB has now released the final report as a PDF: Aircraft Accident Brief: Pilot/Race 177, The Galloping Ghost.

The 70-year-old aircraft, they have determined, was unsafe.

The only documented major modification was the installation of a boil-off cooling system. Many other completely undocumented structural and flight control modifications were identified through wreckage examinations.

The wings were shortened, the elevator counterweights were increased, the vertical and horizontal stabilizers had been modified with filler material until their weight was over doubled the specified maximum, the rudder had the trim tab and control cables removed and the elevator trim tab system was modified.

Fluttering is a rapid motion, oscillation or vibration which can range from an annoying buzzing sound to the “violent destructive failure of the structure in a very short period of time”. The two factors which affect flutter are aircraft speed and structural stiffness.

The investigators found that the elevator trim tab attachment screws on both sides were loose. The locknuts had yellow paint on them, which means they were probably installed 26 years previously when the trim tabs were painted yellow.

The screws were likely tightened 4 days before the accident flight when the technical inspection found a discrepancy on the right trim tab attachment screws, and the airplane had accumulated only three flights (including the accident flight) since that time. The loosening of the trim tab attachment screws and the deteriorated condition of the locknut inserts should have been noticeable to the ground crew.

There was a fatigue crack in one of the screws which meant that the structural stiffness of the elevator trim system was compromised. This decreased stiffness allowed for aerodynamic flutter of the trim tabs. The flutter caused “dynamic compressive loads in the left elevator trim tab’s link assembly that increased beyond its buckling strength”.

Other modifications to the elevator counterweights and inertia weight made the aircraft more sensitive to pitch control. However, the NTSB concludes that the loss of control as a result of the damage to the trim tab linkages led to the crash.

Probable Cause
The National Transportation Safety Board (NTSB) determines that the probable cause of this accident was the reduced stiffness of the elevator trim tab system that allowed aerodynamic flutter to occur at racing speeds. The reduced stiffness was a result of deteriorated locknut inserts that allowed the trim tab attachment screws to become loose and to initiate fatigue cracking in one screw sometime before the accident flight. Aerodynamic flutter of the trim tabs resulted in a failure of the left trim tab link assembly, elevator movement, high flight loads, and a loss of control. Contributing to the accident were the undocumented and untested major modifications to the airplane and the pilot’s operation of the airplane in the unique air racing environment without adequate flight testing.

You can watch the full NTSB hearing including the safety recommendations on YouTube: