The Amazing Survival of Lauren Elder

It been forty-two years since Lauren Elder survived a plane crash in the “Nevada Triangle”, the region in the Sierra Nevada mountains that claimed Steve Fossett’s life in 2007. The Nevada Triangle runs from Las Vegas, Nevada to Fresno, California at its base and Reno, Nevada as the top point.

Lauren Elder’s flight was on the 26th of April in 1976. She was only a passenger, out for a sight-seeing trip, sitting in the back of the four-seater Cessna 182P Skylane. And still, hers is one of the most compelling aviation stories I’ve ever heard.

The 26th of April was a lovely sunny day and Elder was invited to join the pilot and his girlfriend for a fun flight from Oakland Airport to Furnace Creek Airport in Death Valley. Furnace Creek Airport opened in 1942 under the charming name of Furnace Creek Emergency Landing Field. It was abandoned by the military in 1945 and a smaller civilian airfield reopened a mile further west in 1953.

The pilot had 213 total flying hours, 46 on type. He checked the weather, which was warm and clear. They departed Oakland Airport that morning, planning to take aerial photographs around the Sierra Mountains followed by a picnic at Furnace Creek, returning home in the late afternoon.

However, it seems that the pilot did not have any mountain flying experience. Mountain flying is unforgiving. The simple size of the scenery can make it difficult to judge scale and distance. Sierra Nevada mountain range is 400 miles long and 70 miles across with mountain peaks extending to 14,500 feet – the highest peaks in the contiguous United States. Flying in this type of geography is specifically trained because the weather systems and the elevation make it much more difficult than “normal” flying, especially in a small aircraft.

Elder has written a book about her experience, obviously from the point of view of a passenger, but there’s some clear warning signs as she describes her experience in the Cessna.

The pilot probably planned the trip following Bubbs Creek to Kearsarge Pass, a well-known route that would lead them safely to Furnace Creek, but instead, he flew south-east into an area called Center Basin, which is ringed to the east by three high peaks of 13,000 to 14,000 feet. Between these highest peaks was a ridge of around 12,500 feet.

Wind in mountainous areas causes strong updrafts and downdrafts which will quickly change the altitude of the aircraft outside of your control. Where possible, pilots route through mountain ranges by following valleys through to the other side. But obviously, there aren’t always convenient valleys to take you along your route and it’s impossible to fly in the mountains without ever crossing a mountain ridge. So, those updrafts can be critical to crossing the ridges, because you can ride the updrafts upwind of the ridges, gaining enough altitude to cross to the other side and then lose your altitude once you are safely across. The point is to always have an escape route.

They were clearly enjoying flying the Cessna in inaccessible areas, which is of course one of the great advantages of light aircraft. But Elder writes about how it took her a while to get used to the way the plane was plunging and that she felt a thrill at their daring. That sounds to me like they are riding the up and down drafts of the area and not just to get over a ridge but for the pure thrill of it.

The description of “their daring” makes me wonder if they were suffering from mild hypoxia, which manifests as euphoria and overconfidence. The FAA requires supplemental oxygen for the pilot for flights at 12,500 feet for more than 30 minutes and at all times above 14,000 feet. We don’t know what height they were flying at or for how long, but as they were flying towards a 12,500 foot ridge, one would expect them to be higher than that.

However, as they approached the east end of the basin, Elder remembers that the pilot called out, “Get ready for a fantastic view when we clear the crest.” I don’t think Elder understood the import of the statement but it tells us something vitally important about their altitude. If they were safely above the ridge, they wouldn’t have to clear the crest to see the view. If they can’t see beyond the crest, then they aren’t flying above it, they are below it.

Elder remembers that at that moment, there was a sudden downdraft. This tells us a couple of things. The important point is that when wind flows over a mountain, the “upwind” side has updrafts and the lee side has downdrafts. So if you are flying with the wind, you know you can expect wind flowing up as you approach the mountain: just like you, it wants to get over the peak. And if you are flying against the wind, then as you approach the high ground, the wind will flow down.

If they were about to cross a ridge and experienced a downdraft, then they were on the lee side. The ridge was at 12,500 feet and it was a warm day which means the density altitude was even higher. The Cessna 182’s ceiling is around 16,500 feet. On a windy day on the wrong side of the ridge, without being able to see the view on the opposite side as they approached, there was no way they were going to get across it.

Elder wrote that she looked forward to see them flying into a wall of granite. The next thing she knew, she was waking up in a crumpled aircraft on the side of the mountain, a few feet away from the ridge.

The pilot had crawled out of the plane but his girlfriend was still unconscious. They dragged her out of the plane and Elder collected the fuel dripping from the broken wing so that she could light it for warmth. The girlfriend convulsed and slipped down the slope. The pilot seemed to have given up, telling Elder “I did a dumb thing, really dumb. I should have circled. Should have made another approach to gain altitude. There were downdrafts.”

The point of circling is that you can keep clear of terrain while you increase your altitude. By circling the valley, a pilot can get 1,000 or 2,000 feet clearance before crossing the ridge. But realistically, that’s 14,500 feet and with the high density altitude, he would have already reached the ceiling of the aircraft. Add to that the fact that he was trying to cross on the lee side of the mountain. He knew they were in turbulent weather, which meant that he needed more altitude in order to not be smashed into the terrain by the downdraft as they crossed.

As it was, the Cessna impacted the rock nose first, so it was below the ridge by the time they reached it.

Although in a sense, he understood that he should have had more altitude before attempting to cross high ground, this statement as much as anything betrays his lack of understanding of the situation he was in.

He died of his injuries and hypothermia during the night. The following morning, Elder saw a small plane flying overhead but was unable to attract its attention. She knew she needed to get down the 12,500 foot slope and to safety. 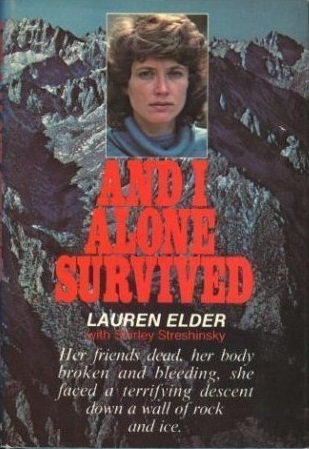 Lauren Elder wrote about her experience in a book called And I Alone Survived which I very much recommend. It’s an amazing survival story of her trek down the icy mountain with a broken arm and shattered teeth, just to be ignored when she reached the town of Independence, as the townsfolk thought she might be yet another drug-addled groupie of Charles Manson, who had recently gone to trial there.

Regarding the flight, the NTSB cited the weather as “high density altitude” and offered the following probable causes: 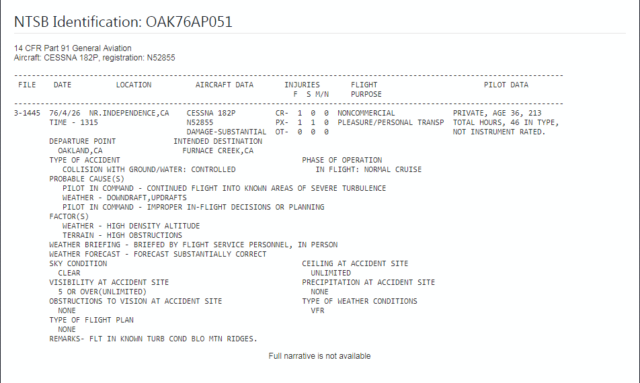 These days, the causal factors would be more detailed; those points lead to the conclusion that that the pilot continued to fly in dangerous conditions, ignoring severe turbulence. The key point of the report is that the NTSB believes the pilot should have realized that the conditions were bad, that the turbulence during the flight meant that there would be severe updrafts and downdrafts near the mountain ridges, and that a plan to fly over the high ridge at that height was a bad decision.

An easier way to put it might be simply lack of respect for the Nevada Triangle. 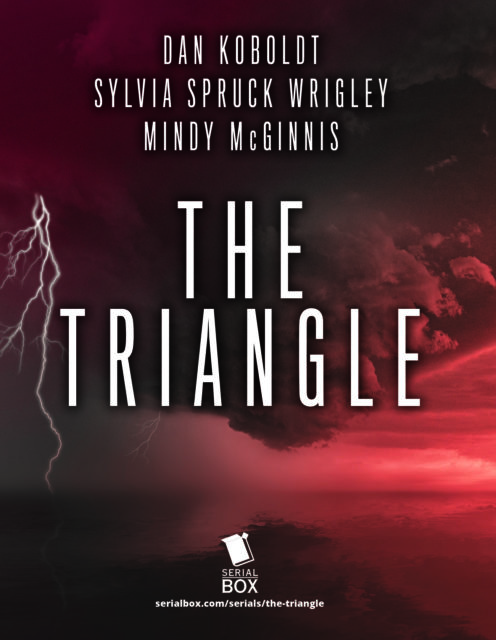 Speaking of triangles, I’m excited to tell you that Serial Box have just launched The Triangle, a paranormal mystery created by Dan Koboldt and written by Dan Koboldt, Mindy McGinnis and …me!

You can find out more about Serial Box here: How It Works or you can click straight through the free pilot episode, also known as chapter one. The series is available as text or audio and if you like it, you can subscribe for a 25% discount by using the discount code TRIANGLE25.