It was a quiet Saturday in Tampa on the 5th of January in 2002. A 15-year-old high-school student arrived at the St. Petersburg-Clearwater International (KPIE). He started learning to fly May the previous year and had been taking lessons at the airport once or twice a month. He had a flying lesson scheduled for 17:00.

In the US, a student may not fly solo until their 16th birthday but training flights, where the instructor is the pilot-in-command, are possible. What better way to celebrate your 16th birthday with your first solo flight!

The student pilot checked in at the school. He’d done 19 hours in the aircraft already and that day, he was planning to work on traffic patterns. His flight instructor was just finishing up a previous lesson. He told the student to go ahead and do the pre-flight checks on the training aircraft and handed him the keys. The plane was a two-year-old Cessna 172R, a four-seater single engine aircraft commonly used for flight instruction.

This attracted some attention after the event, but it is absolutely standard. I remember that as a student pilot I was amazed and awed that I was given the full responsibility of verifying that the aircraft was airworthy. I was just a student, surely someone should be checking my work? But no, it is important that pilots understand from an early time that this responsibility belongs to the pilot and no one else. After a few weeks, it became common-place.

Also, the student was trusted by the flying school. The FAA said that he often helped out by washing and fuelling aircraft as needed. Denying him access to the aircraft would not have made sense, especially as once he was 16, he would be expected to fly it on his own as a part of progressing his licence.

A lineman fuelling another aircraft saw the student walk to the Cessna with what he believes was the books for the aircraft. He recognised him as one of the students. He finished fuelling the aircraft and as he drove to his parking position, he saw the student remove the tie-downs, so presumed that the student must have previously completed his pre-flight checks. He parked the fuel truck about 50 feet from the Cessna.

As he got out of the fuel truck, he heard the engine turn over unsuccessfully. He walked towards the Cessna and was near the wing-tip when the engine started and running. The student applied power and started rolling forwards, most certainly not standard procedure. The aircraft turned left towards Taxiway A without making a call to Ground Control. It did not stop at the hold short line but entered runway 35R without permission and took off immediately. 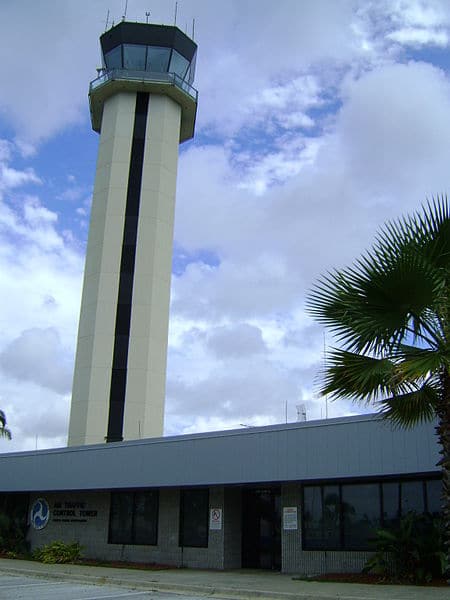 The tower controllers were alarmed and immediately called out to the student pilot on frequency and also on the emergency frequency 121.5MHz. They received no response. The Cessna climbed out and turned right towards the southeast. They notified Tampa approach and McDill Airforce Base.

A local Coast Guard helicopter had just taken off when they heard that a Cessna had departed the airfield and was travelling towards the Airforce Base.

The student had not spoken to anyone. The helicopter offered to help and were asked to try to verify the Cessna’s intentions. The Cessna continued southeast and climbed to 3,700 feet as the helicopter set off in pursuit.

The Cessna entered McDill Air Force Base’s restricted airspace and descended towards the tower. It flew past in front and below of the tower windows and then pulled up again. He then overflew two KC-135 tankers, passing less than a hundred feet over them. Northeast of the airforce base, he turned crosswind as if attempting to return. The Coast Guard Helicopter caught up to him.

They were now 14 miles from St. Petersburg-Clearwater International and the Cessna was heading northeast, towards downtown Tampa. The Coast Guard Helicopter flew alongside the Cessna at about 400-500 feet away. As they were only five miles from Peter O. Knight Airport, the crew gestured through the open side door that he should route there and land the aircraft.

The student pilot made eye contact and gestured back but the the crew had no idea what the gesture meant, if anything. The Cessna did not deviate from its course. There wasn’t much else they could do.

17:02:46 Coast Guard helicopter: Yes sir, we’re currently in the vicinity of Tampa General (unintelligible) chase to a single Cessna [callsign] November Two Three Seven One November. Been advised he took off from Saint Pete. It’s a fifteen year old student, took off with unauthorised clearance. We’re trying to give him hand signals to maybe get him to land at at Peter O Knight, however he doesn’t seem to be responding and, uh, we’re just, we may impede on your airspace here, sir.

Two F-15 combat jets were scrambled from Miami to intercept the aircraft but they arrived too late.

The Cessna continued northeast, now only 300 feet above downtown Tampa. At 17:03, it flew directly into the 28th floor of the 42-story Bank of America building.

The wings sheared off as the aircraft collided into the building. A woman was working on the floor where the plane struck. “Suddenly you’re looking out into the open air, the blue sky, 28 floors up.”

Air traffic control worked together to stop departures in the area, an attempt to clear the skies as much as possible while they worked out what was going on.

The student was dead on impact. Although the plane leaked fuel, there was no fire. No one else was hurt. When they opened the cockpit, they found a 2-page scrawled suicide note on his person.

I have prepared this statement in regards to the acts I am about to commit. First of all, Osama bin Laden is absolutely justified in the terror he has caused on 9-11. He has brought a mighty nation to its knees! God blesses him and the others who helped make September 11th happen. The U.S. will have to face the consequences for its horrific actions against the Palestinian people and Iraqis by its allegiance with the monstrous Israelis–who want nothing short of world domination! You will pay–God help you–and I will make you pay! There will be more coming! Al Qaeda and other organizations have met with me several times to discuss the option of me joining. I didn’t. This is an operation done by me only. I had no other help, although, I am acting on their behalf.

Investigators found no evidence that he was connected to any terrorist groups at all.

I don’t know why this is the bit that made me wince but when I read the analysis of the wreckage I realised: the boy had his seatbelt on.

The National Transportation Safety Board determines the probable cause(s) of this accident to be:

In the 20 years previous to this accident, 140 aircraft were stolen and then crashed. Of those, two others were determined to be suicides. A further 18 suicides took place in non-stolen aircraft: that is, the pilots either used their own aircraft or rented an aircraft. 2002 seems marked by these violent death-by-aircraft incidents but the question of what, if anything, can be done to save these pilots and their aircraft remains unanswered. It is certainly clear that airport security is not the critical factor.