I almost dismissed this as a variation of the diver found in tree urban myth, in which a helicopter fighting a forest fire supposedly scooped up a diver when collecting water and then deposited the water and the diver onto the burning trees, leaving the body to be found there at a later date. There’s a debunking of this popular myth on Snopes.

This case, however, is horrifyingly real. In 2013, US media reported that a student pilot’s corpse had been discovered in a tree after falling out of an experimental aircraft. The area included other scattered debris from inside the plane, which helped them to find the body.

Obviously I had to find the original NTSB report (ERA13LA183) to find out what had happened. 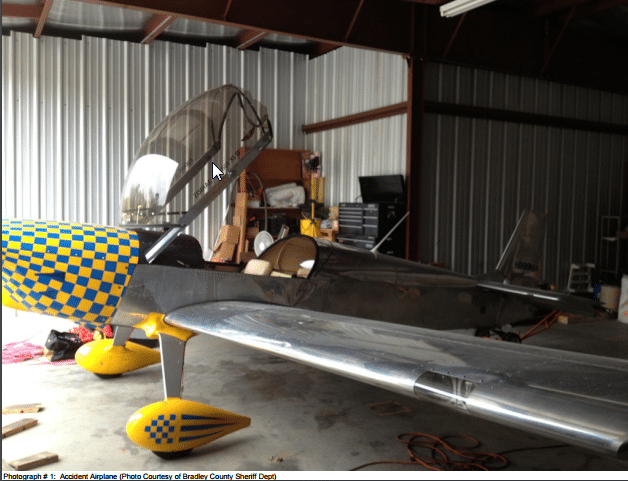 The aircraft was a Zodiac 601XL, a two-seater, low-wing kit plane with a fixed tailwheel. The aircraft, described in the report as “experimental” and “amateur-built” was assembled in 2009. At the time of its last conditional inspection four months before the accident, it had a flight time of 57.8 hours.

Here’s a video of a demonstration flight of the Zodiac 601XL (the video does not show the accident aircraft):

A private pilot purchased the kit plane and, as he was unfamiliar with the Zodiac, he arranged for lessons with a local flight instructor. The Zodiac is sold as a light sports plane, popular with low-hour pilots as they are easier to fly. In the US, the Zodiac doesn’t require a full pilot’s licence; it is rated as a Light Sport Aircraft (LSA) which requires only 20 hours in training. The pilot, however, held a full private pilot certificate and valid medical certificate. He was 77 years old with a total of 150 hours.

The flight instructor flew the 601XL twice on his own to familiarise himself with the aircraft. The second flight was the day of the accident flight.

The instructor reviewed the aircraft and its characteristics with the pilot. They planned a twenty minute flight. He says that they took their time entering the cockpit, where they fastened their seatbelts and secured the canopy.

Then they discovered that the engine would not start. The pilot unlatched and raised the canopy and asked ground personnel for assistance. A ground person brought over a charger. The ground person saw the private pilot unbuckle his seatbelt and told him that he could handle it; there was no need to come out of the aircraft. The pilot put his seatbelt back on and appeared to fasten it. The instructor says he believes he heard a “click” sound but couldn’t actually see the seatbelt as the centre console blocked his view. The pilot and the instructor lowered the canopy and latched it again ready for their flight.

One thing is clear, the second time, the latching of the seatbelt and the canopy took place a lot quicker than it had the first time.

The Zodiac 601XL taxied and took off without incident but, about five minutes into the flight, the instructor noticed a “wind noise” which he hadn’t heard on his previous two flights. He wondered if the canopy had not sealed correctly to the fuselage. As they progressed, he thought that the canopy might have opened a little more although it appeared to be latched. They made a six-mile right arc. As they headed back to the airfield, the canopy pulled up on the latches until the flight instructor could see daylight between the canopy and the fuselage.

According to the Garmin GPS, they were flying at 2,356 feet and travelling at 99 knots. The pilot had the controls.

The flight instructor attempted to pull the canopy down. Instead, the canopy opened completely. The aircraft went into an immediate negative-g dive: the Garmin showed the aircraft descended to 2,047 feet and then three seconds later had descended another 259 feet.

The flight instructor was not clear whether the unexpected dive was caused by the canopy or the pilot or both. A pilot described the 601XL as having “the lightest controls I’ve ever encountered…to make a left turn in a 601XL, merely think about turning left and it will do so.”

In any event, while the aircraft was still in the rapid descent, the pilot lifted out of his seat and “ejected” out of the aircraft. It’s an odd term for the NTSB to use, because to me, this implies an active desire to leave the plane and, one would hope, a parachute.

However, in this case, it appears that the pilot simply fell out. His seat belt must have been improperly fastened, if at all. As the aircraft entered the negative-g dive with the canopy wide open, there was nothing to hold him in.

The flight instructor said it happened in seconds and he had no time to react. He grabbed the control stick and pulled the aircraft out of the descent at 1,788 feet. He continued back to the airfield, where he landed and immediately called emergency services.

The pilot’s body was not found for two days. It was discovered in a wooded area about 4 miles east of the airfield.

An FAA inspector examined the kit plane and found that the fuselage and canopy were damaged. 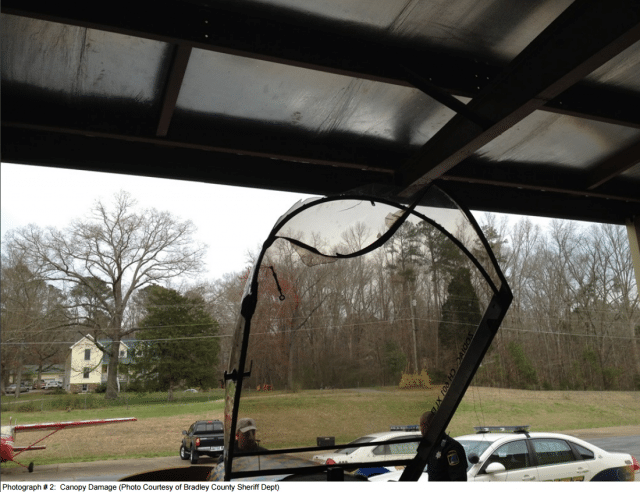 However, the damage seems to have occurred during the flight. Despite the damage, the canopy was still functional. After the accident the investigator was able to secure and release both the canopy and the seatbelt without difficulty.

She also discovered that the canopy fit was not aligned as well as it should be.

The canopy latches functioned properly; however it was difficult to seat the latches in the locks and tell that they were properly latched. The canopy fit was so poor on this aircraft that safety wire and turnbuckles had been attached to the bottom back edges of the canopy to aide in the latching of it.

There is no final conclusion from the NTSB but the implication seems to be the pilot might not have correctly secured the canopy nor his seatbelt after he released them to speak to the ground personnel.