On the 13th of January 2018 at 18:25 UTC, Pegasus Airlines flight PC 8622 veered off of the runway at Trabzon Airport in Turkey. Trabzon Airport is on the edge of the Black Sea. Flight 8622 was a regularly scheduled passenger flight from Ankara, the capital of Turkey, to Trabzon. There were 162 passengers and six crew on board.

This has hit international news because the photographs are very striking (and because there’s generally not a lot of aviation news on a Saturday night). 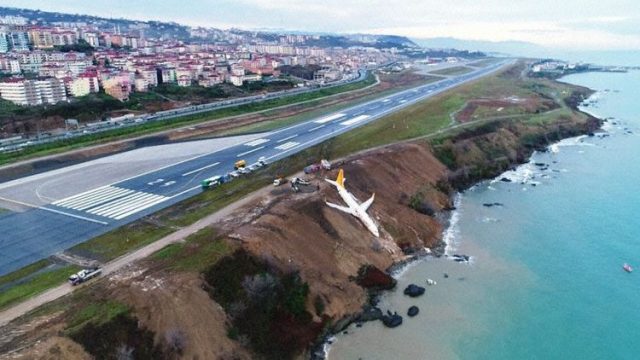 The Boeing 737-82R landed normally on runway 11 but then veered off to the left near the end of the runway. The aircraft slid about 60 metres/200 feet down a cliff before the landing gear dug into the muddy ground. The aircraft came to a rest near the water’s edge. Amazingly, there were no injuries among the passengers and crew.

An aerial video of the aircraft resting on the side of the cliff was filmed by local news, showing just how close this came to being a disastrous crash.

We’re sorry to report that the Boeing 737-800 type TC-CPF registered aircraft of Pegasus Airlines Flight Number PC 8622 Ankara-Trabzon flight scheduled at 18:25 UTC tonight, had a Runway Excursion Incident during landing at Trabzon Airport (13 January 2018). All 162 passengers, 2 pilots and 4 cabin crew have been disembarked safely from the aircraft. There has been no loss of life or injury to anyone on-board.

Trabzon’s governer has confirmed that an investigation is in progress. The Accident Investigation Board of the Ministry of Transport, Maritime Affairs and Communications are the relevant authority. Unfortunately, it seems that they do not publish their incident and accident investigation reports, even though Turkey is a member of ICAO.

So far, the flight crew were tested for intoxication and interviewed about the landing.

I particularly like the sound of the sea and waves in this video.

It was raining at the time and the runway was wet; local media reports that the aircraft had difficulties braking. According to Aviation Herald, the flight crew reported an engine issue.

The flight crew reported the flight was normal until after touch down with the first officer being pilot flying, deceleration was slow due to the wet runway, the controls were handed to the captain, the captain applied brakes, the aircraft turned left, the aircraft went off the runway, the right hand engine suddenly accelerated in forward thrust unintentionally. The aircraft went over the cliff and dropped, the right hand engine separated and fell into the sea. The aircraft came to a stop, the crew alerted tower and emergency services responded arriving in a short time.

On the 18th of January, two cranes lifted the aircraft from the cliffside. Local media were on hand and live streamed the entire event. The aircraft sustained major damage as it slid, including the right engine detaching and landing in the Black Sea.

I found this video, which shows the Boeing 738 as it comes up to the flat area on the side of the runway, to really give a sense of the size and the weight of the airliner.

The airline confirmed this week that the aircraft is out of service and will be written off.

I am hoping that, as this has received such widespread attention, the accident report will be published and made available in English. At the very least, I would love to know what happened with the right engine!