On Sunday, the 27th of November 2022, a single-engine aircraft made national US news when it crashed through power lines in Gaithersburg, Maryland, coming to rest on a lattice tower.

The aircraft was a Mooney M20J 201, a popular fast aircraft whose designation of “201” is based on 201 miles per hour: the J model’s maximum cruise speed. The M20J is an aerodynamically cleaned up version of the M20F, redesigned by LeRoy Patrick “Roy” LoPresti, an aeronautical engineer best known for his work on the Apollo Moon Program. About 2,150 M20J 201s were produced, with 1,600 of them still on the US registry. Aviation Consumer notes that the Mooney has a history of pilots struggling with the landings.

The biggest operational shortcoming of the original M20J was its low gear-operating speed (Vlo) of 107 knots for both retraction and extension. This, together with the low flap extension speed (Vfe of 114 knots), caused pilots grief in high-density areas and led to the airplane’s reputation as a hot-handling, hard-to-land performance machine, which it really is not, although we were dumbfounded while researching the latest NTSB wreck reports for the airplane. It’s littered with landings—and go-arounds—gone wild, evident that Mooney pilots still struggle with landing these airplanes as they always have.

Written in 2020, that article refers to another instance of a Mooney M20J flying into power lines, which I identified as NTSB case WPR13LA407 which occurred on the 15th of September in 2013. The pilot had been flying at 1,000 feet when the engine cut out. He was descending, planning to land on the road, when he flew through a power line.

Then the engine restarted; amazingly, the pilot was able to climb away. ATC offered to assist with routing to the closest airfield; however, the pilot decided instead to fly a further 150 miles before landing, at which point he discovered the extent of damage from the cable strike. The cut power line had slashed across the aircraft, damaging the propeller assembly, the engine cowling and both wings, with significant damage to the left aileron. 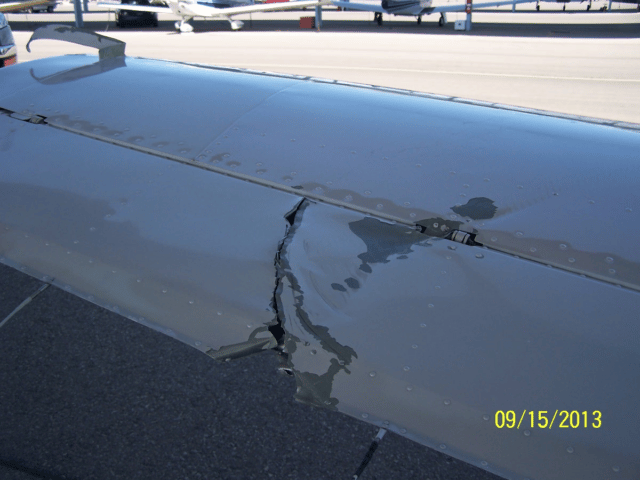 Mooneys are amazing and Mooney pilots are maybe just a little bit crazy, is what I’m saying.

Let’s get back to current events. The Mooney that flew into the power lines last week was an early model, produced in 1977, and registered to a private company in the US as N201RF. The president of the company was the pilot.

That day’s travel started just before nine that morning when the Mooney departed Montgomery County Airpark in Gaithersburg, Maryland. The pilot and a friend flew to Westchester County Airport in White Plains, New York for a day trip. The pilot has confirmed that he is rated for instrument flying and said that he had been flying for over 30 years; however in a later interview, he said he’d taken ten years off of flying after a crash thirty years ago.

The flight to New York was uneventful. A few hours later, at 15:00 local time, the Mooney departed New York for the return to Montgomery County. The flight was expected to take about two hours at 167 mph. The ATC recording of the pilot’s flight from LiveATC.net shows that the pilot was struggling to maintain his headings, causing some concern to the controller.

The weather at Gaithersburg was poor, with heavy rain and mist and a cloud base at 200 feet. Visibility at Montgomery County Airpark was just two kilometres (1.25 miles); the controller told the pilot that he may wish to reconsider his approach.

The pilot appeared to agree, although this isn’t audible on the recording. The controller cleared the flight for the RNAV (GPS) approach for runway 14 and asked him to change to the airpark’s advisory frequency (Montgomery County Airpark is untowered; the frequency is used for pilot-to-pilot communication).

During the approach, the Mooney descended past the minimum safe altitude. They continued to fly well below the glide slope which should have protected them from any high terrain or obstacles before they reached the runway. The controller attempted to warn the pilot.

But the pilot would not have been on the controller’s frequency, having switched to the advisory channel.

They were still over a mile out when the Mooney flew through the cables in its flight path, severing live high-voltage wires, and crashed into two transmission towers.

At the same time, a pilot asked the controller about the approach into Montgomery. The controller can’t clear another flight for the instrument approach until the previous aircraft has either landed or initiated a missed approach (cancelled). The controller told the pilot that a Piper Cheyenne had missed an approach attempt but that there was a Mooney still on approach. “I’m still waiting on the cancellation,” he said. “It looks like they made it for now.”

In fact, the Mooney was wedged into the second transmission tower and dangling 100 feet above the ground.

These transmission towers are a type of freestanding vertical framework structure, the most famous example of which is the Eiffel Tower. This particular type of steel tower with three-sided lattices is commonly used in the US to transport bulk electric power over high-voltage transmission lines.

A 911 call released shows the moments after a small plane crashed into power lines in the Gaithersburg area trapping and injuring the pilot and passenger. The plane was heading towards Montgomery Airpark. https://t.co/O0H2nhTzRF pic.twitter.com/LVKRWdIfCm

The pilot, trapped in the cockpit of the dangling plane, used his mobile phone to call emergency services.

Dispatch: Montgomery County 911; what’s the address of your emergency?

Mooney pilot: I’ve flown into a tower to the northwest of Gaithersburg Airport. It’s one of the electrical towers. Believe it or not, the aircraft is pinned on the tower and I don’t know how long we are going to be able to stay here and I don’t know–

Dispatch: Wait, are you the airplane pilot?

Dispatch: OK, stay on the line with me.

Mooney pilot: We are in the tower. We are still in the plane. And we are in a…and now, we have a light that’s coming at us, checking to see how we are doing. (shouts) Hey, how ya doing!

The pilot was very concerned about his passenger, who was hurt in the impact. He had initially wanted to climb out of the aircraft. But then when the aircraft shifted in the wind, he changed his mind.

Mooney pilot: I don’t think there’s even room for me to stand on this tower, even if I do get out.

The dispatcher agreed that the best thing to do was to stay as still as possible and wait for emergency services to get up to them.

The pilot knocked out the windscreen and pulled out the dashboard, in order to give them an escape path if the Mooney started to slip further.

Dispatch: You are doing a great job, OK? I know at this point, it seems like forever. I’m sorry that this happened. I’ll be with you guys here until they can get up to you, OK?

Meanwhile, a member of the Montgomery County Fire and Rescue in Maryland contacted his chief to say that the firehouse has lost power. The chief responded that the power was out for miles around. Then they saw the active call appear on the board, with a note that a plane had crashed into a transmission tower.

The dispatcher stayed on the line with the pilot for an hour and a half, during which the pilot spoke about what happened.

Mooney pilot: Totally a visibility issue. We were looking for the airport. I descended to the minimum altitude and, uh, then, apparently, I got down a little bit lower than I should have.

Emergency services appeared on the scene with mobile cranes.

One firefighter said that when he arrived, the aircraft was moving and the pilot was attempting to climb out of a window. The firefighter was taken up to the aircraft after being warned that despite the outage, touching any of the power lines could be fatal. Even the cables that had been sheared through could contain static electricity strong enough to shock a man into unconsciousness.

Engineers from the power company had to test and ground every affected power line before the first responders could even consider a rescue. They put clamps or cables onto the wires to ensure there was no risk from residual power. This took six hours; they finally gave emergency services the all-clear at at 23:30.

Then the firefighters and the engineers worked together to stabilise the aircraft.

No one specifically makes anchoring-a-plane-to-a-transmission-tower cable. There was no real way of testing the stability of everything that high up. Everyone had to trust their training, and there was no margin of error, the firefighters said.

They anchored the Mooney to heavy rigging in the tower and were finally able to make it to the cockpit. It was now past midnight. The pilot and the passenger had spent seven hours in the freezing cold, hoping the plane wouldn’t come crashing down.

One of the firefighters told WTOP News that they quickly realised that the passenger’s injuries meant that she needed to be pulled out first. There wasn’t enough room to keep both safely in the bucket.

We removed the lady first and he was trying to come out right behind her. “I was like ‘Just stay where you’re at.’ I actually ended up closing the door to the fuselage, to the cockpit, and there was another bucket up there, and I had them move in closer so he couldn’t open it back up and try to come out.

Both the pilot and the passenger were safe on the ground by 00:35 on Monday morning. They were taken to hospital and kept in for multiple injuries, hypothermia and trauma. The passenger had several broken ribs and needed stitches on her forehead. The pilot had broken his nose and lost two pints of blood (over a litre) from a head wound.

Finally, the responders were able to remove the Mooney from the tower and lower it to the ground with a crane.

The power company said that 120,000 homes and businesses were affected by the power outage, with 80,000 losing power completely. However, once the Mooney was pulled out of the transmission tower, they were able to restore power to the stricken areas in just an hour.

Thanks to Julie and Mike who alerted me to this while the situation was still ongoing.

The FAA and the NTSB have confirmed that they are investigating.