Hypoxic or Fatigued? Pilot Slow To Respond Over Indianapolis

The Indianapolis Air Route Traffic Control Center, better known as “Indy Center” isan Area Control Center which deals with flights in the area of Indianapolis, Indiana. It is the 12th busiest control centre in the United States, covering over 73,000 square miles and its central location means they are adjacent to six other ARTCCs.

On the 16th of June in 2020, an Area 3 controller called Area 6 on the landline to say that he and the previous controller, from Area 7, were worried about a pilot that they’d spoken to who was coming into Area 6. The aircraft was a Cessna 441 Conquest II, a turboprop designed to bridge the gap between the jets and the pistoned-engined aircraft. The pilot was en route to his home base in Youngstown, Ohio. 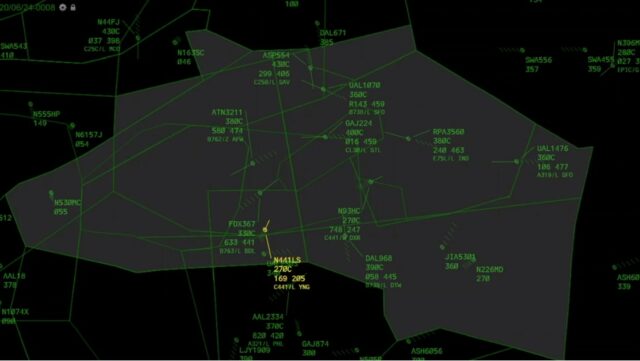 The Area 3 controller said that the pilot’s speech rate and intermittent responses had worried them. They were concerned that he might be hypoxic.

The Area 6 controller, Matthew Wyric, recognised the call sign as an aircraft who regularly flew through his area. He had been working at Indianapolis Center for six years, eighteen months as a fully certified controller, but he’d never dealt with a suspected case of hypoxia before.

Hypoxia, where the body becomes starved of oxygen, is a risk for pilots at high altitude in unpressurised planes. The first symptom of oxygen starvation is that your judgement is impaired, accompanied by a general sense of well-being and euphoria. The result is that the initial effects hide the hypoxia from the victim. You become confused and disoriented but, at the same time, you don’t understand why this might be a problem. The “time of useful consciousness”, that is, the time in which you remain capable of making sensible decisions and correcting the problem, is limited.

The Cessna 441 Conquest II is a pressurised aircraft which takes eight to nine passengers and can be flown by a single pilot. The Cessna in question, registration N441LS, was flying at FL270 (27,000 feet).

The controller remembered that his father, a commercial pilot, had told him that if he suspected hypoxia, he should ask the pilot to look at his fingers. “He said that if they were purple, that would be a big sign.” He also knew from his training that if the pilot was hypoxic, the most important thing he could do was get the pilot to descend.

The pilot of the Cessna made contact and the controller started by asking the pilot about the current conditions.

Controller: Cessna 441 Lima Sierra, there’s some weather well to the southeast of you. I’m just curious: are you guys in the clear there?”

Pilot: Yeah, we’re in the clear and off to the right….We’re depicting some on our radar, but it is all below us. [pause] Several thousand feet below us.

You can follow along with the highlights from the audio here:

The controller remained concerned. “His response was a little slow. It wasn’t enough to convince me he was doing OK.”

The Cessna was not yet due to descend for his designation of Youngstown but the controller decided to ask him to descend anyway, to try to gauge the situation and to keep the pilot focused on the flight.

Controller: Cessna 441 Lima Sierra, Roger. And if you don’t mind for traffic, I need to start you down a little early. Descend and maintain flight level two three zero.

The readback was slow and more importantly, the aircraft did not change level. The controller waited a moment and then called back.

Controller: Cessna 441 Lima Sierra, I still show you at flight level two seven zero. Do you–have you started your descent?

PIlot: Yes sir. We have started it and um…[pause] We’re currently out of… twenty seven… for twenty-seven nine.

The pilot’s response is confused, citing a descent from 27,000 feet to 27,900 feet as opposed to the 23,000 feet that the controller asked for. He wa also very slow to respond, sometimes taking a couple of minutes before he would speak in a voice that seemed to be slightly slurred. The controller takes charge.

Controller: Cessna 441 Lima Sierra, I believe you are hypoxic. I’m declaring an emergency on your behalf. Just verify your oxygen system is on and working properly and descend and maintain one two thousand.

An American Airlines flight passing through the same area contacted the controller.

AAL2334: Regarding that aircraft that you declared an emergency for: you could ask him what his cabin altitude indication is.

Controller: November 441 Lima Sierra, can you… do you have a cabin altitude indicator?

With the microphone keyed, all that came through was bursts of noise.

Controller: Cessna 441 Lima Sierra, we believe you’re hypoxic and had to declare an emergency on your behalf. Um. Do you understand?

The pilot seems to be keying the microphone incorrectly, all that can be heard is bursts of noise. The controller is urgently trying to get the flight down to a level where the pressurised system is no longer needed.

Hypoxia has many components so it is impossible to specify an exact level that is safe for an unpressurised aircraft. The American FAA requires oxygen available for flights over 12,500 feet and that the oxygen is used for flights that are over 12,500 feet for more than 30 minutes, with constant oxygen (or pressurisation) needed for flights over 14,000 feet. As a GA pilot, I was taught to descend to below 10,000 feet if I suspected I might be hypoxic and to deal with everything else later. Six thousand feet is definitely in the “absolutely 100% safe” range.

Controller: Cessna One Lima Sierra, affirmative. Descend and maintain six thousand…. and if able, see if you can, um… you’re coming in very broken on your radio.

This call comes through clearly; the pilot’s voice is at a normal speed and sounds strong. Also note it’s the first time he’s correctly repeated his call sign following the controller’s lead.

Controller: November 441 Lima Sierra, I read you much better and … and like I said, like…. how are you doing right now? You’ve been really hard to understand and haven’t been very clear in your communications at all.

I love this break from protocol; the controller just really wants to know that the pilot is OK.

Pilot: OK… um. I apologise about that, but, um, I… uh, I feel totally fine and coherent. Um.

The truth is, he does sound fine and coherent, now, if a bit bemused by the question. But it is quite a change from his earlier transmissions.

Controller: Descend and maintain six thousand and acknowledge with a read back.

Pilot: OK, down to six thousand, Conquest One Lima Sierra.

I take it back about following the controller’s lead. Normally the controller decides how the call sign can be shortened, if at all and the pilot should then use that shortening to avoid confusion. The logic is that the controller knows what other call signs are in the area and can disambiguate quickly, but I have to admit, it’s common to hear pilot’s using their own short version when calling back.

Controller: Cessna 441 Lima Sierra, how do you hear?

Pilot: Loud and clear. How do you hear?

Pilot: I had been for the descent since you told me to, uh, to start down…

His voice almost sounds slightly slurred here. If I were the controller, I’d be leaning forward in my seat, trying to work out if I was imagining it.

Pilot: …and I took it off at eight thousand feet.

At eight thousand feet, there should be no need for supplemental oxygen. Crisis averted. The pilot still seems somewhat bemused by the whole incident.

Pilot: Um… the only thing I can think of is, I’ve…I’ve been working…

Controller: Cessna 441 Lima Sierra, say that last part again? You said something about you were working?

Pilot: Yeah, I was… you know all weekend, it was a beautiful weekend, and I was doing a lot of physical labour at home, and then I had this early trip this morning….to take, um, my best friend’s family down to a funeral…[pause] For their father, and I was down there all day and, um, you know, I was kind of sluggish all day. So, um…you know. That might have been it.

This is really not the time to explain and also not an especially useful explanation. The pilot sounds much clearer now, but he’s also clogging up the frequency for very little value. Maybe that’s normal for him, though, it’s hard to know.

Fatigue can obviously also make you slow to react and even cause slurred speech, especially if you’ve actually drifted off for a moment. But then again, fatigue can also make you more susceptible to hypoxia and at a lower level. Hypoxia makes you feel sleepy and worse, you might feel good about taking a quick nap. I’m not sure it’s really possible to tell the difference here, other than that it took the pilot quite some time to recover, which seems to have corresponded to his descent to 8,000 feet.

Controller: Just wanted to make sure everything was OK and …when someone is hypoxic, we… We always just try to get them descending and, and hopefully help them out.

Pilot: No, I appreciate that. Thank you. Believe me, I was looking at my fingernails and all the [unintelligible]… I didn’t see anything, I think it was just, you know, fatigue.

Pilot: …which is, you know, which isn’t an excuse, it’s just as bad, so, um, I do appreciate your concern.

It seems the pilot believes he may have fallen asleep, which could have caused him to sound slow and confused, but doesn’t believe that hypoxia was the cause.

The controller then handed the aircraft to Cleveland Center and the pilot landed safely a short time later. As there was no actual incident, there is no investigation or NTSB report.

However, the controller in question received an Archie Award for the region for his response to the situation.

His controller-in-charge said it was well deserved.

“[The controller] Matt remained professional throughout the event and communicated well with the pilot. The pilot reported fatigue, and that may be the case, but Matt did an excellent job of making sure he stayed awake and on oxygen. The aircraft landed safely at its destination thanks to Matt’s attitude of the importance of safety.”

In addition, the NATCA Podcast has a 22-minute episode in which the controller tells the story in his own words.

In the end, it doesn’t matter if the pilot was suffering from hypoxia or was just fatigued. It sure sounded to me like a textbook case but the truth is that either way, the controller’s attention forced the pilot to concentrate on the flight, will have mitigated the effects of the fatigue even if the descent was unnecessary.

I just hope the pilot both gets some sleep and gets his pressurisation system checked!