On the 2nd of December 2020, a Boeing 737-500 flying as Air Djibouti flight IV-2065 departed Hargeisa, the capital of Somaliland, to Garowe, the capital of Puntland (both generally considered to be in Somalia). I have taken the details from the Aircraft Accident Investigation Preliminary Report as hosted on AVHerald.

Air Djibouti, previously known as Red Sea Airlines, ceased operations in 2002. They relaunched in 2015, initially as a cargo airline and then as a passenger airline in 2016 with a Boeing 737-400 as the flag carrier of The Republic of Djibouti, which is just north of Somalia. According to Wikipedia, in 2016, their total fleet for cargo and passengers consisted of three leased aircraft, the Boeing 737-400, a Fokker 27 and a BAe 146-300, all of which were returned to the leasing companies in 2017. Aviation Safety Network simply lists the airline as having ended operations in 2002.

Possibly there’s a chapter to this story that I am missing; however certainly there is a Boeing 737-500 which is registered as EY-560 (Republic of Tajikistan) which is owned by Asia Sky Lines and wet-leased to Air Djibouti in May 2019. It appears to be Air Djibouti’s only current aircraft. Or I guess I should say, was.

Their website which seems to have been at http://www.air-djibouti.com/ is no longer responding.

The captain was a Russian national who held an ATPL from the Krygyz Republic (Kyrgyzstan), which borders Tajikistan. He had 6,050 hours logged flight time with 5,170 on the Boeing 737-500.

Boeing 737s require two flight crew (pilot and co-pilot) but the preliminary report has no reference to a first officer on this flight. However, it does note that there were eight crew on board and that all crew had the appropriate qualifications and expertise. Whether one of those was a first officer is not made clear.

The flight originated in Djibouti for a flight to Mogadishu with scheduled stops at Hargeisa and Garowe. It departed Hargeisa normally at 05:40 (all times given in GMT) with 31 passengers on board for the 40-minute flight to Garowe.

The captain was conducting a visual approach for runway 06 and was stabilised on final approach. However, just before reaching the threshold of the runways, travelling at 135 knots and at low altitude, he said that the 737 “experienced a windshear” which led to the aircraft “hitting the runway” for a hard landing which burst two of the tyres. 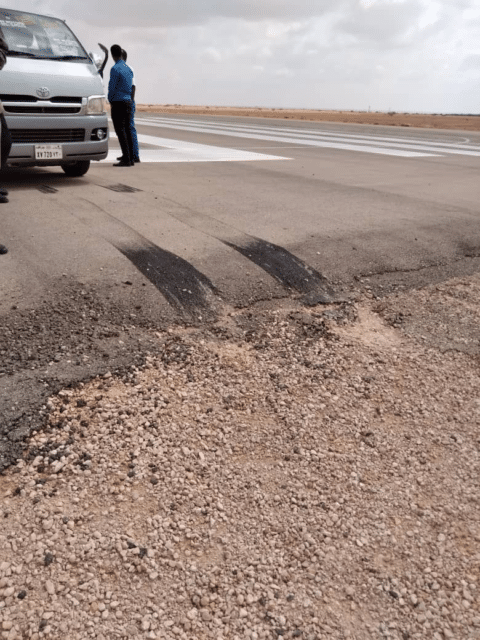 The photographs accompanying the preliminary report show that the aircraft touched down before the runway and then bumped over the threshold and skidded to a stop at the runway’s edge. 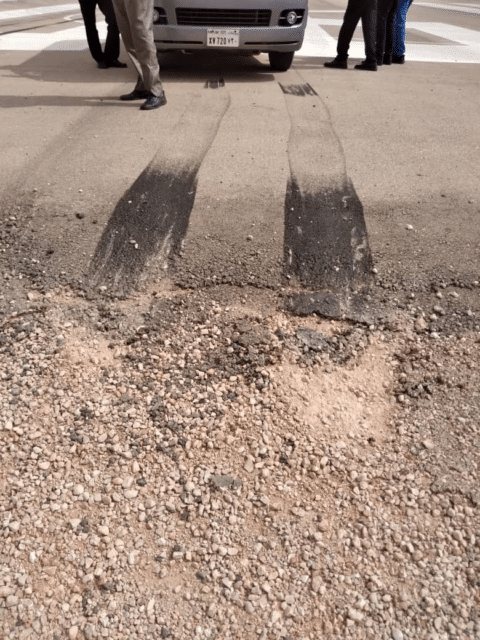 The most recent weather report, released at 06:25, showed some low clouds at 2,000 feet but visibility was good with a north-easterly wind (060°) at 17 knots. 06:25 is the same time as given for the landing, which means the flight crew could not have had that detail. The preliminary report does not offer any further meteorological information or make any reference to what information, if any, the flight crew had.

Hopefully this will be dealt with in the final report.

The preliminary report concludes that:

the root cause of the accident is loss of control [and] the contributory factor was windshear.

There are five recommendations, which is common for a preliminary report, where there are issues which could be dealt with immediately, rather than awaiting the full analysis and details of a final report. In this case, four of the recommendations appear to be dealing with the aftermath of the accident because, although it isn’t dealt with in the preliminary report, that is clearly where things really went wrong.

Air Djibouti plane suffers landing gear collapse on landing at Garowe airport, Somalia. The flight headed from Djibouti to Mogadishu with stop at Hargeysa and Garowe. No casualties reported. pic.twitter.com/TPOWClbUSb

There was only one reply: “Where is Airport Fire Trucks and Team (ARFF)?” After the aircraft had come to a stop and the engines were shut down, the passengers disembarked and were taken to the terminal. Normally, the ARFF (Aircraft Rescue and Fire Fighting) would be on the runway immediately as a part of the emergency response, in order to control or extinguish any fires and to help clear passengers from the fire hazard area. Once the emergency is declared as under control, the ARFF protects the scene in order to preserve evidence for investigators.

In the US, ARFF operations are legally required at all airports which offer scheduled passenger flights. The ICAO Annex 14 (Aerodrome Standards) holds that any airport without a functional fire service should close and no flights should operate to or from the airport. Although in some cases (for example airports with low passenger travel in Australia) domestic airports can be run without fire services, airports handling international flights (such as Garowe) fall under ICAO rules.

Boeing have a specific manual for ARFF services at airports with flammable material locations, emergency rescue access points, battery location and relevant flight deck control switch locations for all of their aircraft, to enable fire fighters to quickly and easily secure the aircraft.

But none of this matters because Garowe Airport ARFF did not respond. At all.

There is only one fire truck at the airport and, as can be seen in this photograph tweeted that morning by Dalmar Diri’E, it was missing a tyre. Apparently, the fire truck has been out of service for about two months.

The investigation is still in progress but as Flight Global still shows between one and four daily commercial flights in and out of Garowe, one hopes that some immediate changes have been made.