Ground to EVA35, Apparently You Hit a Pole

Earlier this week there was a bit of a fender-bender at Toronto Pearson International Airport.

It was early morning and dark at Toronto, although the lights were on and the ground was clear of snow. The aircraft was cleared to taxi out of the Central De-Ice Facility via Taxiway Victor and changed frequency to Ground Control.

As they were exiting the de-icing area, Ground contacted EVA 35 to say that de-icing staff had reported that the aircraft was not on the centre-line of taxiway Victor, which the flight crew acknowledged. A moment later, Ground called back to say that they had apparently hit a pole.

You can hear the entire exchange here on this LiveATC recording.

It carries on for some time as they dispatch vehicles to the de-icing facility to take a look. The hope in the voice of the flight crew is kinda heartbreaking.

The answer was yes, the right wing had in fact collided with a lamp post. 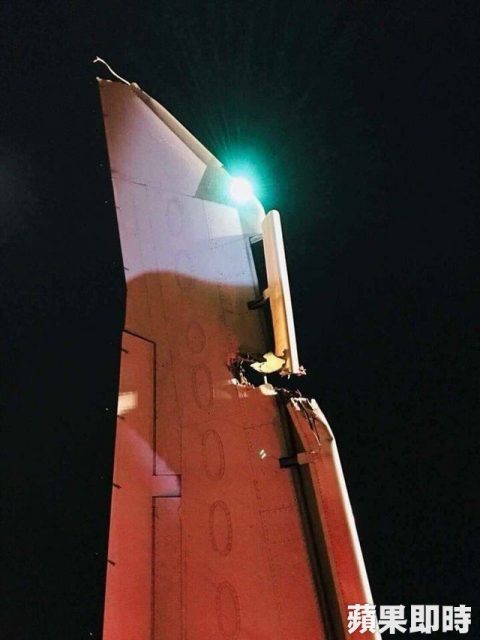 Fire engines were dispatched and the 238 passengers (and two infants) were evacuated and then watched from the sidelines.

Was on same flight. Video of YYZ fire services untangling pole lamp from EVA 777 wing. Wonder if that's ever been said before? pic.twitter.com/tIoQm3nRk5

An intriguing question is how the flight crew didn’t notice that they’d collided with the pole. Reports from the back of the plane differed. One passenger said he felt’two BIG bumps’ and claimed someone else had reported sparks from the pole being dragged. Another said they only felt two vibrations before the aircraft stopped.

The pole was knocked over on impact and one report said that the aircraft continued travelling with the lamp itself embedded in the wing. If this is correct, then it seems like the Boeing had probably already struck the pole by the time someone noticed they were off the centre line.

How they went wrong seems a little bit clearer. Aviation photographer Tom Podolec points out that the flightradar24 track shows the route they took from Bay 3.

If you look at their route, you’ll see they turned right to follow the taxiway along the edge. Looking just a bit up from them on the map, you can see Taxiway Victor going straight through. This is the route that a wide-body like the Boeing 777 should take.

Following the right-hand lane took them too close to the lights, even if they were right on the centre-line.

Toronto Pearson airport was also the location for the wingtip collision last Sunday so if you are flying in or out of there, please be careful on the ground!