Go Around at Gibraltar

Last week, this video of an Airbus A320 performing a frankly frightening looking approach followed by a go around was splashed all over social media.

Here’s the original footage on Twitter with an apology for the swearing:

The Airbus A320 (registration G-EUUY) was British Airways flight 492, a scheduled passenger flight from London Heathrow to Gibraltar International Airport. Gibraltar is a bit of a nervewracking airfield at the best of times, although presumably not to a BA pilot.

Passengers had already been warned at Heathrow that the flight may be landing in Malaga as a result of strong winds in the area. However, as they reached the local area, the captain of the flight decided to make an attempt to land at Gibraltar before diverting. The videos show the A320 oscillating for around 20-30 seconds before straightening out and climbing away. 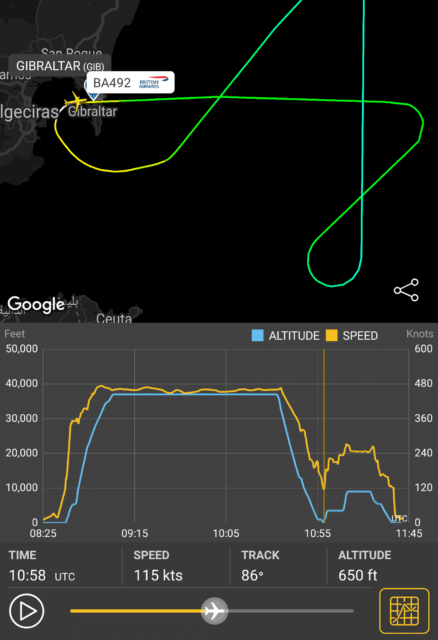 A British Airways spokesperson made a minimal statement:

Due to strong winds in the Gibraltar area, our pilots decided to land in Malaga as a precaution. The safety of our customers and crew is always our number one priority. At no point was there a risk to safety.

The runway at Gibraltar is frequently featured in lists of challenging runways or, from a passenger point of view, the scariest. The History Channel ranked the airport as the fifth most extreme airport in the world. The airfield is alongside of the 426 metre (1,400 feet) high Rock of Gibraltar and exposed to strong crosswinds from the Bay of Algeciras on three sides and Spanish prohibited airspace to the west and north. The runway itself crosses the two lane road that runs between Spain and Gibraltar. Although the road traffic has never caused an issue, in 2017, a Royal Gibraltar Police vehicle drove onto the road blocking the runway in order stop an RAF military transport from taking off when they discovered that a suspect wanted by the Royal Gibraltar Police was on board.

Approaches at Gibraltar are always flown by the captain as the margin for error is particularly small. Although Gibraltar’s elevation is at sea level, the Rock of Gibraltar causes updrafts and downdrafts similar to those experienced in high mountain ranges. Warm air flows over the rock and then is pressed down by colder, more dense air pressure on the other side. This can cause strong winds and turbulence, known as rotor turbulence.

I’m never a fan of random passengers being asked to describe a pilot’s actions, but here’s what one told Gibraltar news:

And then [the captain] changed her mind. She was like no, we’re going to land in Gibraltar. As it started to descend, it was like a gust of wind and it sort of tipped the plane over to the right. From then on, she just lost control and the aircraft started to sway from side to side. She regained control to ascend again because obviously, we could not land.

Another passenger told Sky News that he said his final prayers. A number of eye witnesses on the ground claimed that the pilots were waggling the wings to say hello, which goes to show just how unreliable these reports are.

Having said that the passenger videos show that it was quite exciting in the cabin:

No details on the cause have been released but it looks like it could have been wind shear leading to pilot induced oscillation.

The aircraft landed safely at Malaga airport 40 minutes later with no further issues and no injuries. The passengers were taken to Gibraltar by bus.