What do you get when you combine a popular airport for plane spotters with a stormy forecast and a crosswind on the runway?

On the 21st of February 2017, the Met Office issued yellow and amber warnings for wind, snow and rain as Storm Doris began to gather steam. On the night of the 22nd and into the morning of the 23rd of February, Storm Doris underwent “explosive cyclogenesis”, when the central pressure inside an area of low pressure falls at a very rapid rate, over 24 millibars in 24 hours. A jet stream high up in the atmosphere can remove air from the column, which reduces its weight and causes the pressure at sea level to fall. This sucks in air from the surrounding regions which results in faster and faster rotation of the circulation, in the same way that ice skaters spin faster by drawing their arms in. The effect is known as a weather bomb.

Warnings of the weather bomb with its violent winds spread across the UK and Northern Europe as the centre of the storm moved through Northern Ireland, across northern England and out into the North Sea. There were delays and cancellations to flights throughout the day.

Meanwhile, Flybe flight BE1284, a DHC-8-402Q (Dash-8) departed Edinburgh, Scotland at 14:21 UTC, bound for Amsterdam-Schiphol International Airport. An hour later, it entered a holding pattern over the North Sea off of the western coast of the Netherlands. Schiphol airport had struggled with strong winds all day.

As the aircraft rolled down the runway at speed, the right-side landing gear folded in on itself. The right wing-tip scraped the ground and the aircraft came to a halt. The flight crew made a mayday call and evacuated the cabin immediately. 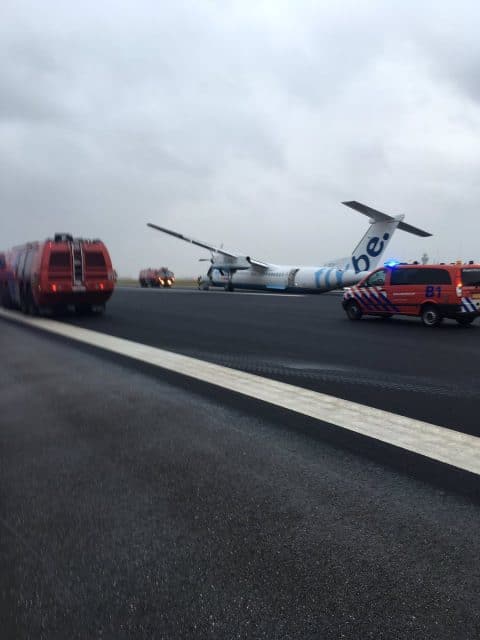 This would be pretty much a non-incident except for the spectacular coverage of the landing from all angles. And I really do mean from all angles. Within a few hours of the incident, videos from the front and back and inside were online.

Here’s the aircraft coming in (skip to 1:50 if you just want to see the landing):

Here’s the view from behind:

And another view from behind, focused right in on the collapse.

This video is taken from inside of the aircraft:

Here’s the Mayday call made after the landing:

Here’s the fire trucks rolling out:

And finally a video of the evacuation:

Pretty much the only thing that’s missing is a go-pro style video from underneath the right wing!

So what happened? A Dash08 pilot commented on the landing on PPRuNe:

The DH8D is generally considered not an easy aircraft to land. Reasons for this are e. g. the large speed spectrum between plain Va and Va+20 on short final, the differences in approach pitch both due to these speed differences and different flap settings (with Va and flap 15°, a pitch of 2-3° is not untypical while flap 35° and Va-ICE may show a pitch of -3 to -4°, both in a stabilized final approach). Also the flap setting makes a world of difference: while with flap 15°, drag is rather low and an early (ish) power reduction is appropriate, flap 35° will not only result in some background buffet but also lend the aircraft a drag coefficient of a proper Amish barn. Careful handling of the power levers is required. Also the prop RPM makes some difference; speed control is much more responsive with higher RPM than with lower (compare a car at 1st speed vs. 4th). And to top it up, a pitch at touchdown of -0,5° may result in a nosewheel landing while from +5°, you are in tailstrike territory. Not much wriggle room there.

Bleeding off the speed is therefore not so much a function of the flare height but of power lever handling; the same can be said for the length of the flare, although here the height comes into play as well. Using power to break the descent works on the type as well but is sternly frowned upon by my company at least due to the unpredictable influences on landing performance.

I find that starting a flare in 30-50ft, simultaneously raising the nose and slowly reducing power as needed, thereby assuming the desired pitch for landing and adjusting the sink rate via power, works rather well on this aircraft and results in power-off touchdowns, some soft(ish), some more noticeable.

All this is of course fine and dandy in theory, but then along comes such a weather as the colleagues encountered at AMS. The most thought-out and well flown roundout and flare can quickly go south when a nasty gust shows up at the right time.

Maybe the airlines aren’t crazy about this kind of grass-roots coverage. Let’s face it: it’s never good to have a picture of your broken aircraft going viral. But I have to admit, I think it’s amazing! It’s almost as if I was there! Although I’d prefer to be sitting on the grass with my binoculars rather than in the cockpit for an incident like this. :D