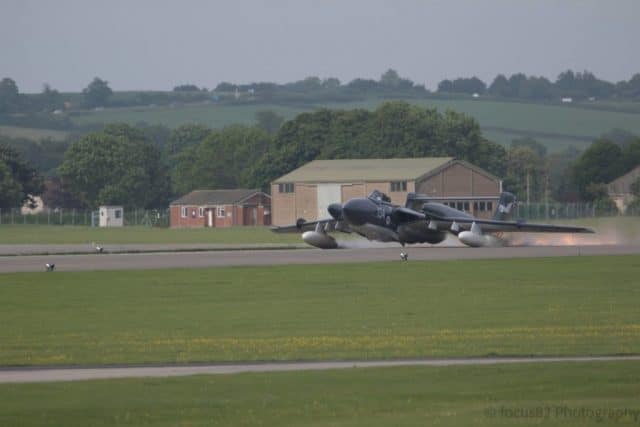 The aircraft was flying back from the Duxford Air Show in Cambridgeshire when the pilot contacted Yeovilton Tower to ask for a visual of the landing gear. The controller confirmed that the undercarriage was clean, which meant that the landing gear had not released. After several passes of the runway, it became clear that the aircraft had hydraulic issues and was going to have to land gear-up.

The pilot came down for a belly landing on the runway, releasing the canopy off the cockpit as he came down to land. Here’s another video from a different angle.

The pilot was unharmed but it’s unclear as to whether how bad the damage is to the Sea Vixen. In the video, you can see that it struck the tarmac with some force and there are flames at the rear of the plane.

Navy Wings have said they are doing everything they can to get her back in the air. 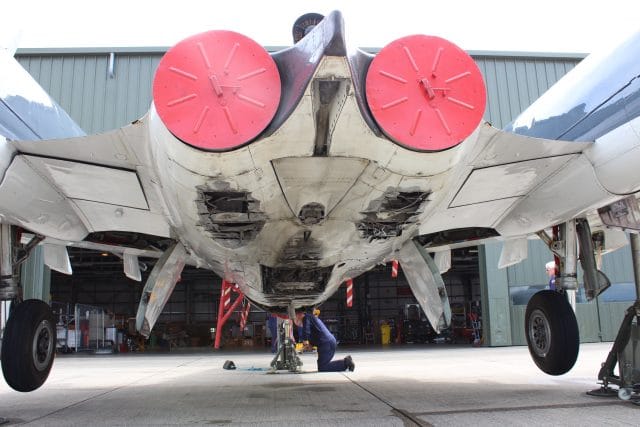 Simon’s calm professionalism and outstanding flying skills, in a situation that demanded the utmost courage and control, minimised damage to a rare and nationally important heritage jet. The aircraft has been safely recovered from the runway and assessors will now carry out an inspection of the damage. The Trust would like to thank all its supporters and well wishers for their donations and support. 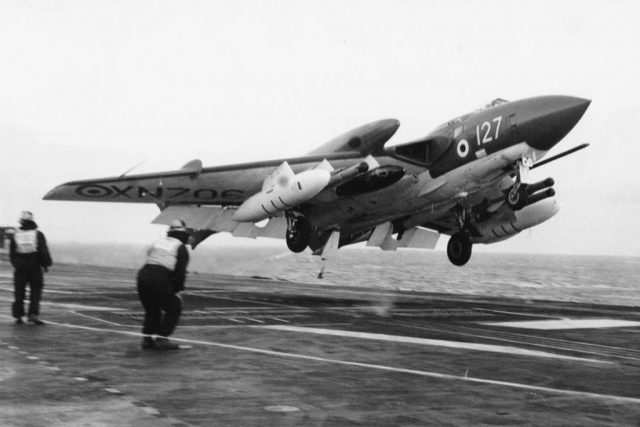 The Sea Vixen, a twin-turbojet fighter was designed and used by the Royal Navy in the 1960s. It was the first British two-seat aircraft to break the sound barrier.

The Sea Vixen is an iconic all-British twin-boom, twin-turbojet fighter that flew from Royal Navy aircraft carriers at the height of the Cold War in the 1960s and 70s, helping to transform the nation’s carrier aviation capability. She was one of the UK’s most notable aircraft designs of the time, with cutting edge technology and the capability to go transonic. The Vixen was the first British aircraft to be armed with guided missiles, rockets and bombs instead of guns and was formidably capable.

With power-folding swept wings and hinged nose-cone, she epitomised the radical and innovative thinking of British engineers and designers of the time, whose designs overcame the challenges of operating the UK’s all-weather interceptor at sea, day and night.

Fifty-four Vixens were lost in accidents of the 145 manufactured. The aircraft, Foxy Lady (G-CVIX XP924), is the last flying Sea Vixen.

Here’s Foxy Lady at the Duxford Airshow before the crash.

Foxy Lady first flew in 1963 as a part of the 899 squadron at RNAS Yeovoltin. She was retired from service in 1971 and sent to the Royal Naval Aircraft Yard at Belfast. In 2014, she was gifted to Naval Aviation Ltd, operating from the Royal Naval Air Station in Yeovilton.

Here’s her full history from the Navy Wings site.

The Sea Vixen entered service with the Fleet Air Arm in 1959 replacing the Sea Venom. Sea Vixens, flying from HMS Centaur in 1964, took part in the successful operation to restore stability in the East African state of Tanganyika. In 1961 and 1964, Sea Vixens saw service in the Persian Gulf and later in the 1960s they played a crucial role during the days of the Beira Patrol preventing oil reaching landlocked Rhodesia. In 1967 Sea Vixens also helped cover the withdrawal from Aden.

Sea Vixen XP 924 first flew on September 23, 1963 and was delivered to 899 Squadron at RNAS Yeovilton on December 18, 1963. The aircraft suffered several incidents in squadron service. Tyre bursts, canopy shattering, some engine problems and, while onboard HMS Eagle, an inadvertent release of a practice bomb near the island of Gan in the Indian Ocean. Retirement from active service sent her to Royal Naval Aircraft Yard at Belfast in August 1971. The Royal Aircraft Establishments (RAE) at Farnborough and Llanbedr were in possession from 4 June 1973 until August 1977. Flight Refuelling took over on 11 October 1977 at Tarrant Rushton and converted her to a Drone (D3) with a Red and Yellow paint scheme to improve visual acuity. In February 1996 she was taken on by de Havilland Aviation and was re-registered as G-CVIX. In May 2003 she was painted in promotional “Red Bull” colours as a sponsorship arrangement and was subsequently purchased on 18 April 2006 by Drilling Systems Ltd (Mr. Julian Jones) and operated from Bournemouth. March 2007 saw a return to Naval colours as XP 924 with the 899 Squadron mailed fist logo. The aircraft was gifted to Naval Aviation Ltd in September 2014 and now operates from the Royal Naval Air Station Yeovilton.

Navy Wings has an appeal for funds to keep the Sea Vixen flying here: https://www.navywings.org.uk/support-us/sea-vixen-appeal-2017/.
I sure hope that she’s going to be all right!