Five Aircraft That Did Not Crash In Thunderstorms

OK, that title is a bit misleading because there are thousands and thousands of aircraft that haven’t crashed in thunderstorms. Even counting only commercial airliners then, according to How many planes and passenger are there in the world? (Livecounter), there are 19,025 of them around the world right now. All of these have not crashed flying through a thunderstorm.

However, there’s a number of aircraft which have flown through thunderstorms and ended up in trouble. Some of them did crash. Others got away with a hard landing. What they have in common is that it wasn’t just the weather. The thunderstorm alone didn’t result in an immediate crash scenario.

The truth is, flying through a thunderstorm makes the aircraft a hell of a lot more vulnerable. When combined with general risks, such as aircraft structural integrity and human factors, the likelihood of an incident is increased.

Thunderstorm and icing shouldn’t have caused this aircraft to crash 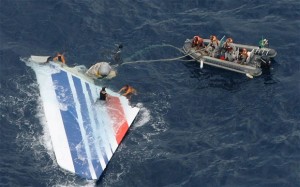 We have to start with the obvious example: Air France flight 447. This has come up a lot when discussing AirAsia flight QZ8501 because there are some core similarities. Both aircraft were flying in thunderstorm conditions. Neither aircraft made a mayday call and in both instances the aircraft simply disappeared from radar. In the case of Air France flight 447, it took a week to find the initial wreckage in the South Atlantic ocean, quite a bit longer than the three days of searching for QZ8501. Finding the black box itself took almost two years but in the shallow waters of the Java Sea, it should be possible to locate the AirAsia black box very quickly: weeks, not years.

Air France flight 447 flew directly through a large system of thunderstorms and the pitot tubes became obstructed by ice crystals. The pitot tubes work as speed sensors and, without this data, the autopilot could not keep control of the aircraft. The aircraft was straight and level: if the flight crew had done nothing at all, the issue would have almost certainly resolved itself in a few minutes. But instead the Pilot Flying pulled the stick back, causing the aircraft to go into a climb and lose speed. The flight crew did not follow the correct procedure for loss of displayed airspeed information and appeared to be very confused by the situation. The confusion in the cockpit lasted until the aircraft crashed. In the most alarming human factors crash of the decade, the Pilot Flying effectively flew the Airbus A330 into the ocean. 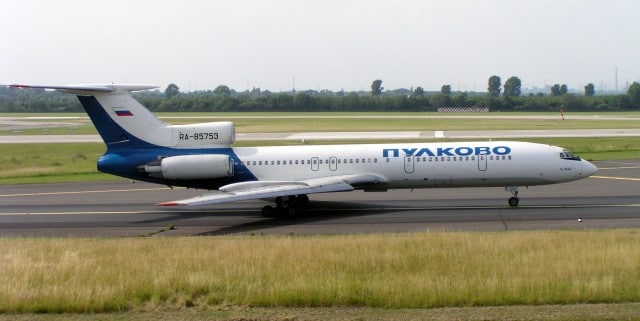 Pulkovo Aviation Enterprise Flight 612 was a Tulopev 154 passenger airline which crashed north of Dontesk in 2006. The area was beset by heavy thunderstorms. The flight crew made a mayday call to report that they were experiencing severe turbulence as they approached the storm area. Two minutes later, the aircraft disappeared from radar. However, it was not the turbulence that brought the aircraft down. The flight crew initially tried to outclimb the thunderstorm, hoping to fly over the top, which may have been the same plan as the AirAsia flight had.

That day, it was an impossible task. The thunderstorm front was extremely high, with the clouds peaking out between 40,000 and 50,000 feet. Nevertheless, the flight crew climbed from their cruising altitude of 35,000 feet to their maximum altitude of 39,500 feet. Untrained in flying at high altitudes, they did not appear to have any idea of the risk

The maximum altitude of an aircraft is the highest altitude at which the aircraft can sustain level flight. As they flew through the thunderstorm, they were subjected to a severe updraft which lifted the aircraft to 42,000 feet in a matter of seconds. The angle of attacked increased and the airspeed dropped to zero. The air density was so low that the aircraft was no longer capable of flight. It fell into an unrecoverable spin. This flat spin is where a plane spins on its belly and gains no airspeed. Witnesses on the ground watched the aircraft spin into the ground at low speed but there was not a thing that the pilots could do.

In-flight break up near a storm 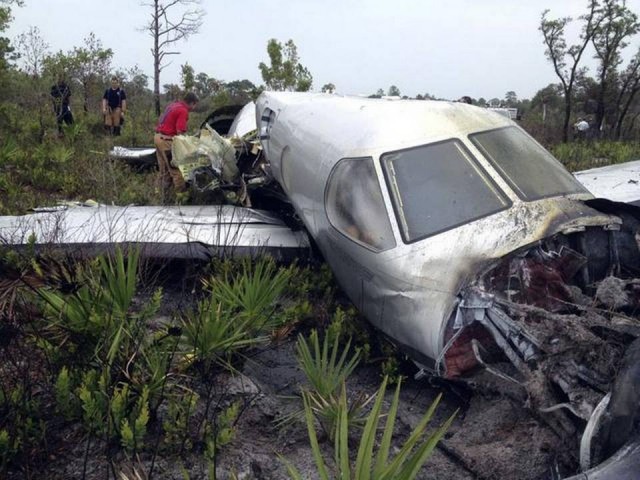 There was one incident in Florida where the wings broke off of a single engine aircraft flying in thunderstorm weather in Florida. The Pilatus PC-12 was flying at 26,000 feet when ATC cleared him to deviate right to avoid adverse weather ahead. As the pilot was turning to the right into cloud, the autopilot disengaged.

However, instead of taking control, the pilot ran through a test of the autopilot to see if it was working normally. Meanwhile, the aircraft continued in an uncontrolled turn. While he was testing, the aircraft dropped into a spin.

At 15,000 feet and travelling at about 338 knots, 175 knots above the maximum operating speed of the aircraft, the pilot appears to have finally realised that the aircraft, and not the autopilot, needed his full attention. He pulled back hard on the yoke, trying to yank the aircraft back up to straight and level. He effectively tore his wings off. 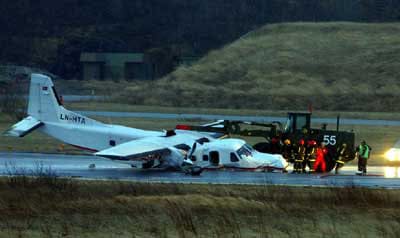 In 2003 in Norway, a turboprop was struck by lightning. Generally speaking, lightning has no effect on modern aircraft, however in some instances the aircraft can lose functionality. In this instance, the flight crew were flying to Bodø in a Dornier 228 when they were confronted with a “wall of clouds”. The storm cells were reported as containing heavy precipitation and intense lightning activity.

Another aircraft reported a lightning strike as it was approaching Bodø airport. The Dornier 228 elected to approach from the opposite direction and communicated with Air Traffic Control about the weather and how to avoid the worst of the storms. The aircraft was at 6,000 feet when it entered heavy turbulence and the flight crew commented that the weather radar didn’t seem to be giving correct information. Thirty seconds later, a bolt of lightning hit the baggage door on the nose.

The crew were blinded for about half a minute. When they recovered, they discovered that their elevator, which controls pitch, wasn’t working correctly. By the time that the Captain took control, the aircraft speed had decayed to a stall. The aircraft stopped climbing at 7,800 feet. The flight crew used engine power to increase the airspeed and the aircraft continued its climb to 9,000 feet. The flight crew regained some control of the pitch using the elevator trim and were able to fly the aircraft to Bodø Airport, where they were given clearance to do whatever was needed to get the aircraft onto the ground. On the second attempt, they were able to get the turboprop onto the runway. They landed hard, snapping off the wheels, but there were no injuries.

The investigation found that there was considerable corrosion of the wires in the bonding and that some 30% of the wires may have been damaged previous to the lightning strike. As a result, the aircraft’s bondings couldn’t conduct the electric energy from the lightning and the transfer rod, which connected the elevator to the cockpit, was broken.

Into the Heart of the Storm 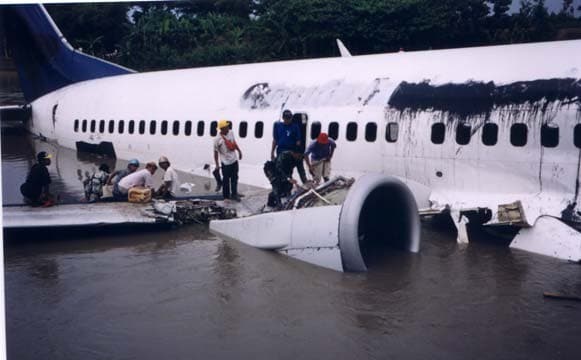 In 2002, an aircraft ditched into the river in Indonesia after flying through a severe thunderstorm. Garuda flight 421 was a Boeing 737 on a domestic flight when thunderstorms closed in, leaving the flight crew with nowhere to turn. They encountered severe turbulence and rain and hail clattered against the aircraft. The cockpit voice recording includes the sound of rain hitting the fuselage. The rain and hail is so torrential, it is almost impossible to hear the conversation in the cockpit. The recording was entered into the sound database of the UK Air Accidents Investigation Branch who found that the rain was the heaviest ever recorded on a cockpit recorder. Based on tests, investigators believe that the aircraft encountered hail/water content as high as 18 grams of hail per cubic metre of air. This is the equivalent of flying through 10,000 ice cubes per second.

The hail ingested by the engines was well above the certified levels. The engines both flamed out. The flight crew attempted to relight the engines but as they were still flying through the heavy precipitation, the first attempts didn’t work.

As if the situation wasn’t horrific enough, during the flight crew’s second attempt to relight the engine, the aircraft lost all power. The flight crew couldn’t know it at the time but investigators discovered that there was a fault in the newest cell of the battery: the level of electrolyte in that cells was much lower than the others. This denied the crew any chance of restarting the engines.

In a somewhat miraculous ending to a horrific situation, the captain managed to glide the Boeing 737 onto the Bengawan Solo River, where it came to a halt facing upstream with the nose up and pointing slightly to the right. There was only one fatality on impact, a cabin crew member. The rest of the crew and all of the passengers were rescued with only minor injuries by local villagers.

The point of this is not to strike fear into the hearts of nervous passengers but to try to explain how thunderstorms are dangerous and why pilots and air traffic control will work together to avoid them. Stormy weather rarely ends in disaster for commercial jets. In those instances where it is a contributing factor, we almost always see some other issue: bad training, human error or maintenance issues which are the actual cause of the crash.

So when you hear about thunderstorms ahead, don’t panic. Flying through a thunderstorm doesn’t make an aircraft spontaneously wreck like hitting an iceberg at sea.