Facts and Photographs from Superjet Crash 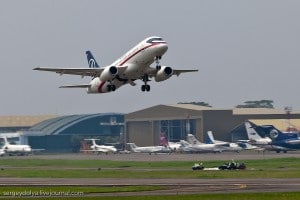 A Sukhoi Superjet 100 crashed in Indonesia last Wednesday. As always, there’s been a lot of confusing and conflicting reports in the media, so here is my attempt to document the factual aspects of this terrible accident. 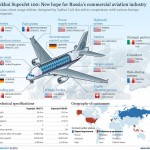 The Sukhoi Superjet 100 is a fly-by-wire short-to-medium range jet with capacity for 75-98 passengers. The jetliner was the first new model to be produced in Russia since the end of the Soviet Union.

The Superjet 100 entered commercial operation in June of last year, with five aircraft currently active in the Aeroflot fleet and one with Armavia.

The aircraft involved in the accident, the Sukhoi Superjet 100 MSN 95004, made its first flight in July 2009 and had accumulated over 800 flight hours in over 500 flights. It had no serious technical problems.

The Superjet was a part of a publicity road show to demonstrate the aircraft to Asian airline executives. Russian blogger Sergey Dolya posted a collection of photographs from the tour on his LiveJournal account. The aircraft photograph at the top of this post is also by Sergey Dolya and links to his gallery.

On the 9th of may, the aircraft, registration RA-97004, was at Jakarta’s Halim Perdanakusuma Airport in order to perform demonstration flights for media and airline representatives.

Here is a video of the aircraft coming into Halim:

The flight was crewed by two pilots with extensive flying experience. The Captain was the chief test pilot at Sukhoi with a military background and over 10,000 flight hours. He did the first test flight of the Superjet. His first officer was also a test pilot at Sukhoi. The Straights Times has reported that neither had flown in Indonesia before.

The aircraft took passengers on a demonstration flight that morning, which lasted 30 minutes and returned to Halim without incident.

The passenger list for the second flight was not updated although some of the invited guests did not arrive and others took their place. As a result, there have been conflicting reports regarding the souls on board. As of yesterday, Sukhoi’s statement says that there were 45 people on board.

Shortly after 14:00 local time, the flight departed for the second demonstration flight of the day. The aircraft was at 10,000 feet near Mount Salak. The peak of Mount Salak is at 7,254 feet however, there is a valley leading between the mountains that the pilots may have decided to fly through.

That was the last radio call from the aircraft. Radar contact was lost between 14:21 and 14:33. The last track showed the aircraft in a right-hand turn descending through 6,200 feet.

The Emergency Locator Transmitter did not go off, leading aircraft personnel to hope that the aircraft was still in the air. After 3 hours, the maximum endurance for the flight, the alarm was raised.

The Indonesian Air Force was unable to start an immediate search and rescue as a result of the thick fog and bad weather. The wreckage was discovered the following day at 5,300 feet MSL and 6 paratroopers parachuted to the crash site, where they stated they had no hope of finding survivors.

The Air Force has stated that the initial impact was at 6,250 MSL into a sheer cliff, which the wreckage then slipped down.

The impact site appears to be just below the ridge line.

The Jakarta Post have reported that satellite surveillance shows that Mount Salak was obscured in thick cloud at the time of the crash.

Video footage of the crash site taken from one of the rescue helicopters has been posted to YouTube:

A pilot with local knowledge wrote about the area in the Jakarta Globe:

Superjet Disappears South of Jakarta: Notes From an Aviation Consultant | The Jakarta Globe

I’ve flown around that area a lot in the past. It’s nice and scenic in visual and meteorological conditions (VMC). But between Mt. Salak and Mt. Pangrango, one has to have their wits around and not have a lapse of situational awareness. Some very strange winds are up there, and conditions are unpredictable even in VMC, and in instrument meteorological conditions (IMC), it’s damn awful. I must thank my fortunes to not have to go through the pass between those two mountains anymore these days.
…
If these guys were only armed with Jepp approach, STAR, and en route charts, a simple “fly out along R206 to 30NM and turn back”, would be fine in VMC, but deadly in IMC and bad localized weather.

Meanwhile, an Aeroflot flight attendant posted to Twitter with commentary on the crash.

As soon as the news about the crash came through, she reportedly twitted with text roughly translated as “A Superjet crashed? (Devil Laugh)… Shit of a plane. Pity not at Aeroflot. Could do with one of the planes out or have them all sold back to someone…”