The incident happened in 2003 but I only just saw the photograph and video on /r/aviation last week.

This looks like a photoshopped picture or a stunt still from of a Hollywood movie but it is 100% legitimate.

The Thunderbirds are the air demonstration squadron of the United States Airforce, the equivalent of the Red Arrows of the UK Royal Air Force or the Blue Angels of the US Navy.

They tour the US and the world to perform air demonstrations but they apparently are able to rapidly integrate into an operational fighter unit. They fly F16 Fighting Falcons.

Their standard demonstration is documented on Wikipedia:

From the end of the runway the 4-ship Thunderbird team get ready to begin their take-off roll with the words “Thunderbirds, let’s run em up!” being retransmitted from the team leader’s mic through the PA system for the crowd to hear.

Diamond: Historically, as Thunderbirds 1 through 4 lift off, the slot aircraft slips immediately into position behind 1 to create the signature Diamond formation. Thanks to the 2009 upgrade to the Block 52, the Diamond now has more than enough thrust to continue to climb straight up into their first maneuver, the Diamond Loop.

Solos: Thunderbird 5 takes to the air next performing a clean low altitude aileron roll followed by 6 who performs a split S climbing in a near vertical maneuver rolling over and diving back toward show center pulling up just above the runway and exiting in the opposite direction.

Much of the Thunderbirds’ display alternates between maneuvers performed by the diamond, and those performed by the solos. They have a total of 8 different formations: The Diamond, Delta, Stinger, Arrowhead, Line-Abreast, Trail, Echelon and the Five Card. The arrowhead performs maneuvers in tight formation as close as 18 inches Fuselage to Canopy separation. They perform formation loops and rolls or transitions from one formation to another. All maneuvers are done at speeds of 450-500+ mph.

Stricklin was flying Thunderbird 6, performing the Split S manoeuvre as a part of his solo performance with the Thunderbirds.

The Split S (known in the RAF as the Half Roll and in the Luftwaffe as the Abschwung) is a dog-fighting technique used to disengage from combat. The pilot half-rolls his aircraft so that he’s flying upside down and then dives away in a descending half-loop, pulling out so that he’s flying straight and level in the opposite direction. 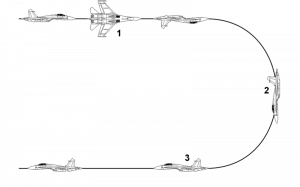 At the Mountain Home airshow as that Captain Stricklin did not have enough vertical space to pull out of the half-loop, leading to his last-second ejection. He had performed the Split S manoeuvre over two hundred times.

The astounding photograph was taken by a professional photographer at the control tower and was swiftly leaked to the public despite the fact that the military immediately locked down into an investigation. The photographer posted on the f-16.net message boards.

I have noticed all over the internet the shot I had taken of the Thunderbird crash at Mountain Home AFB, ID and though I am not at liberty to share the photo; it is out there. I would like to end some speculation and let you know the photo is real.

I’m a Still Photographer for the USAF and I was stationed at MHAFB during the air show. I was on the catwalk of the tower at Mtn Home along with another photog (video) and about seven other (military) spectators. I have shot the T-birds from the tower before and I was pretty excited to do it again (the sky was perfect blue). I followed Thunderbird 6 from takeoff and watched as he pulled into his maneuver. I then noticed something seemed to be wrong, his direction was a little off; he was pulling out and heading right towards the tower. At this point I figured two things: 1. He’s either going to fly past this tower and we’ll feel the heat or 2. This is going to be ugly… I waited for the aircraft to level and clicked the shutter, what I saw through the lens will never go away…

At the same time as I shot I seen a flash of light and horrific sound. I was shooting on high speed continuous and the next couple frames were a ball of fire and my feet, right before I ran. We all ran to the other side of the tower, I tried to get everyone in along with my partner and finally made it in myself. By the time we got inside the 16 had stopped sliding and rested about 100 ft in front of the tower. I then continued documenting the work of our base firefighters as they put out the flames. It was an experience and though I can’t officially make any comments to the matter, I would like to say Capt Stricklin saved lives… enough said.

For those who are wondering the image is not cleared for public release.

The photograph was officially released a few days later, along with the video from the cockpit just before the crash.

Redditors have pointed out that his left arm twitches twice towards the eject lever before committing to the action.

This video shows the view from the crowd:

The investigation results were released as a press release a year later:

According to the accident investigation board report released today, the pilot misinterpreted the altitude required to complete the “Split S” manoeuvre. He made his calculation based on an incorrect mean-sea-level altitude of the airfield. The pilot incorrectly climbed to 1,670 feet above ground level instead of 2,500 feet before initiating the pull down to the Split S manoeuver.

When he realized something was wrong, the pilot put maximum back stick pressure and rolled slightly left to ensure the aircraft would impact away from the crowd should he have to eject. He ejected when the aircraft was 140 feet above ground — just eight –tenths of a second prior to impact. He sustained only minor injuries from the ejection. There was no other damage to military or civilian property.

The aircraft, valued at about $20.4 million, was destroyed. 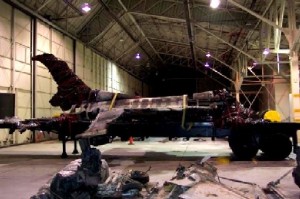 Also, the board determined other factors substantially contributed to creating the opportunity for the error including the requirement for demonstration pilots to convert mean sea level and above ground level altitudes and performing a manoeuvre with a limited margin of error.

The QNH (sea-level altitude) vs QFE (altitude above the ground) is thus seen as a contributing factor.

Stricklin’s home base at Nellis is at 2,000 feet whereas Mountain Home is at 3,000 feet, so the altitude he selected would have been correct at his home base.

The contributing factor of requiring pilots to convert sea-level altitude information to altitude above ground for radio calls was immediately dealt with by the Air Force. Thunderbird pilots now call out MSL (Mean Sea Level) altitudes rather than AGL (Above Ground Level) altitudes and must climb an additional one thousand feet before performing the Split S manoeuvre.

A bystander reported that after the ejection, Stricklin stood silently by the canopy of the aircraft. Then he threw his helmet at the ground and stomped over to the wreckage. He knew that his time as a Thunderbird pilot was over.

However, I was pleased to see that in 2009, Stricklin was commended for his work on safety programmes in the USAF:

It makes sense to me; if I’d been that close to smashing into the ground, I’d be pretty thoughtful about flight safety too!