There’s been a lot of chatter about the Peruvian Boeing 737 which collapsed on landing a few days ago. Obviously there’s not a report yet, but I wanted to try to collect the information so far because three days after the incident. It’s still not clear to me what actually happened.

(Also, I love the dramatic ones where everyone gets out safe.)

Let’s start with the easy details.

On Tuesday, the 28th of March, Peruvian Flight P9-112 departed Lima, Peru for a scheduled domestic flight to Francisco Carle Airport in Jauja. This was a new route for the carrier, with the Lima-Juaja service starting just two weeks earlier. The aircraft was a Boeing 737-300, registration OB-2036-P. There were 141 people on board.

The weather that day was clear with scattered clouds. The local METAR did not include wind information but, based on the videos below, runway 31 was suffering from a tailwind.

The approach proceeded normally; however as the aircraft touched down on runway 31 at 16:40 local time, something went wrong and the aircraft swerved to the right before veering off of the runway.

Here’s a passenger video of the landing. I’ve skipped ahead to a few seconds before the Boeing touched down (two minutes twenty seconds into the video):

This is where things get a little bit confused. The following all happened but the sequence of these events isn’t quite clear: the aircraft departed the runway. The nose wheel and main gears collapsed. Fuel leaked from the starboard wing and ignited.

Certainly, the aircraft burst into flames. The burning aircraft skidded a short distance after leaving the runway and then came to a halt.

All passengers and crew were evacuated and the fire was extinguished. The aircraft was destroyed. Twenty-nine people were injured and taken to hospital.

Here’s a video taken at the airfield which shows the burning aircraft and the evacuation.

So, a happy ending for everyone but the Boeing.

What isn’t clear is what happened at touchdown: What broke and why did the aircraft swerve to the right?

The final approach, at high altitude with what seems to be a relatively strong tailwind, would have had a high rate of descent. But there’s been no useful information as to the sequence of events (landing, departure from runway, gear collapse, wing impact), in terms of what actually happened at touchdown vs after they veered off of the runway.

Peru’s Ministry of Transport and Communication kept it simple, reporting only that the aircraft OB-2036-P had had a hard landing at Jauja Airport. But I have to say, based on that passenger video, the landing didn’t look very hard to me.

The best information we have on this is from yesterday, when the captain of the flight spoke to a reporter at the Peruvian Portal de Turismo about the landing:

“The runway had nothing to do with it. There seems to have been a technical fault. Until we touched down, everything was normal…I tried to stay on the runway but the pull of the plane to the right was too strong for me. ”

My other question is, what did the starboard wing strike which breached the fuel tank?

CORPAC, the airport authority, reported that the right-hand wing of the aircraft impacted the perimeter fence which caused the fire.

At the same time, Peruvian media said that based on passenger accounts, the wing struck the runway as they were landing.

Finally, the Interior Minister topped it off by explaining that the pilot intentionally dragged the wing along the runway to slow it down.

“The plane couldn’t stop on the runway and they made a manoeuvre to stop it with the wing and that appears to have caused the fire.”

I find it difficult to imagine the manoeuvre to stop a 737 with the wing, let alone the pilots who would attempt it…

The investigation has started and hopefully the aviation authorities will release an early statement explaining what happened here, both on touchdown and after the aircraft left the runway.

In any event, it’s great that passengers and crew are all safe. Shame about that poor little 737, though. 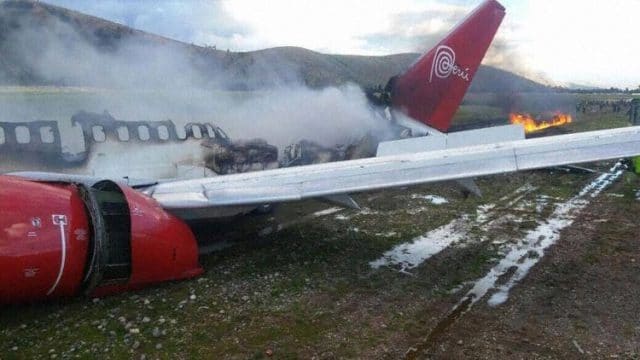 PS: Hurray, sending updates by email is working again! Er, if you didn’t get this, let me know… :)