Yesterday, the 27th of October 2022, a tragic crash of a firefighting aircraft was caught on film in Italy.

The Canadair CL-415 is a variant of the CL-215, a type of amphibious aircraft designed and built by Canadair. The CL-215 was known as the Scooper and the CL-415 as the Super Scooper. This is a series of amphibious aircraft originally designed and built by Canadair, later Bombadier Aerospace and De Havilland Canada. The CL-215/415 was the first fixed wing aircraft specifically designed for aerial firefighting.

The twin-engine, high-wing aircraft is able to fly at relatively low speeds in gusty conditions, allowing it to come in closer to forest fires than most aircraft. The CL-415 has an updated cockpit, improvements to the aerodynamics and an updated water-release system. The upgraded turboprop engines have been placed closer to the fuselage, with winglets added to improve the directional stability caused by the repositioning of the engines.

They are heavily in use in Italy, France, Greece and Canada as waterbombers.

The aircraft in question was photographed by Maarten Visser in 2009 and has been the example photograph of the CL-415 on Wikipedia for years, winning their Picture of the Year in 2016.

The Super Scooper had departed from Lamezia-Terme-S Eufemia Airport, the principal airport of Calabria, to assist in a fire-fighting mission in Linguaglossa, Sicily.

The fire was on the side of Mount Etna, at the Monte Calcinera ridge (not Mount Calcinera, as some are reporting).

There were two flight crew on board, carrying a full load of water collected off of the coast of Giarre.

Many people were videoing the Super Scooper as it flew in towards the burning slope of the mountain, thus the crash has been documented from multiple angles.

Warning, this video show the fatal crash and may be disturbing:

Another video of the crash, possibly copied from Italian news sites, has also been uploaded to YouTube.

The videos show the Super Scooper approach the burning slope in a descending right turn. The turn becomes dangerously steep, followed by the aircraft dropping its load before the aircraft crashes into the ground. One soundbite from the Italian media says that the wing clipped the terrain before releasing the water.

It was quickly clear from this photograph of the wreckage, taken by helicopter, that there could be no survivors.

Video of last night’s search and salvage can be seen on this article on RaiNews: Canadair precipitato sull’Etna, la ricostruzione dell’incidente: “Aereo frantumato in mille pezzi”

There isn’t very much information at this stage although I’m sure a full investigation will be forthcoming. 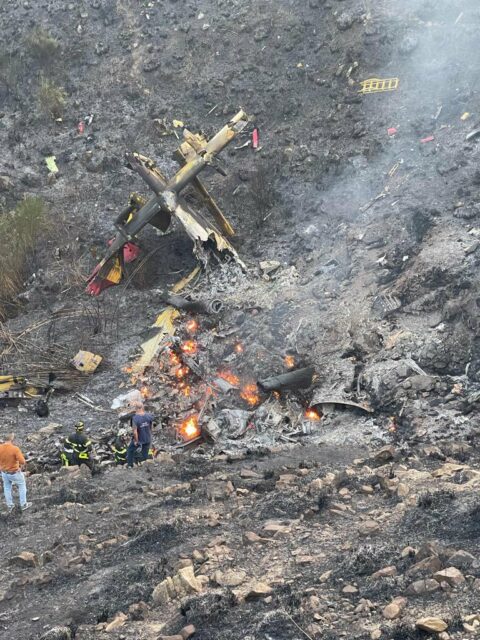 If you are interested in understanding more about aerial firefighting, I can recommend these two recent pieces.

Please feel welcome to post updates and news sources to the comments as you find them.