I usually wait for the final report but, in this case, it is very straight-forward and I’d be surprised if further details will come to light. The conclusion seems pretty clear although I will revisit that when the final report comes out.

On the 7th of January 2017, two aircraft departed for routine flights: one twin-engine Bombadier CL-600-2B16 (604 variant) business jet and one Airbus A380-861, the world’s largest passenger airliner.

At 06:52UTC, the CL604 departed Malé airport on the Maldive Islands for a flight to Al-Bateen, United Arab Emirates.

At 06:55 UTC, the Airbus A380 took off from Dubai Airport, United Arab Emirates, for a flight to Sydney, Australia.

The flight crew of the CL604 turned the autopilot on as they climbed away to their cruise level at FL340 (34,000 feet). The flight attendent unfastened her seat belt and left the jump seat as they climbed through FL100.

After a short time in the cruise, the aircraft entered the Mumbai FIR where they received clearance to fly to their next reporting point.

It was a clear day of very good conditions. The captain of the CL604, who was the Pilot Flying, had the autopilot engaged. He saw the opposing aircraft on his Traffic Collision Avoidance Service (TCAS) display at a thousand feet above. He looked out and recognised the aircraft as an Airbus A380. He was able to see the Emirates livery and pointed it out to the first officer. 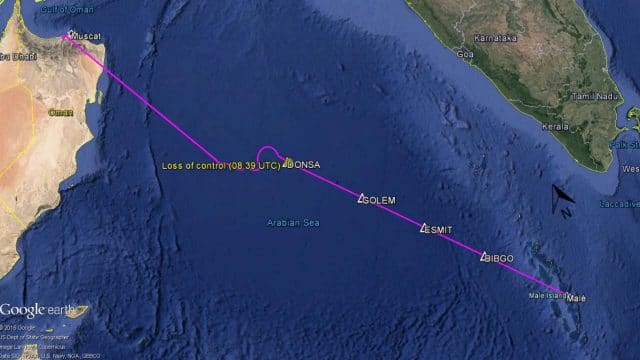 A little less than two hours after take-off, over the Arabian Sea at about 500 nautical miles from land, the Airbus A380 flew over the CL604. The larger aircraft passed slightly to the left and above them flying in the opposite direction.

It was about a minute later when the CL604 shuddered as they hit the wake turbulance.

One second later, the vertical accdeleration changed to negative 3.2 g.

To make sense of this, I looked up typical g-forces. At 1.6 g, the force would be slightly more than on the Bugatti Veyron from 0 to 100 km/h in 2.4 seconds.

I couldn’t find anything for -3.2 g, however, other than the general example of negative g-force as a fully inverted roller coaster accelerating towards the ground. Negative g-forces are much more dangerous and the negative g level that aerobatic pilots risk is usually limited to around -2 or -3 g. Blood vessels in your eyes and brain swell up and may burst as your blood pressure increases. After a few seconds, your vision will go red. If the negative g-force is not quickly reduced, blindness can occur. And as with any extreme g-forces, death will follow soon after.

The aircraft accelerated and the pitch angle changed wildly from 3° to 1° to 9° to -20°, all this in just a few seconds. There was a rudder deflection to the left at 11.2° while the bank angle of the aircraft shifted from 42° right to 31° left.

The aircraft continued to roll. The captain’s headset flew off of his head. The Quick Reference Handbook flew around the cockpit, with individual pages coming loose and scattering about. The Inertial Reference Systems, the Flight Management System and the attitude indication (artificial horizon) failed.

The indicated airspeed dropped from 277 knots to 248 knots. The lateral acceleration reached 0.94 g left and the autopilot disengaged.

The aircraft descended rapidly, losing 8,700 feet over 30 seconds. The speed increased to 330 knots. The flight crew, desperately trying to regain control of the aircraft, extended the spoilers and then retracted them again. They reduced the power in the left engine as the Interstage Turbine Temperature increased. Nine seconds later, it had reached 850°. The left engine shut down. The aircraft rolled at least three times and possibly five. 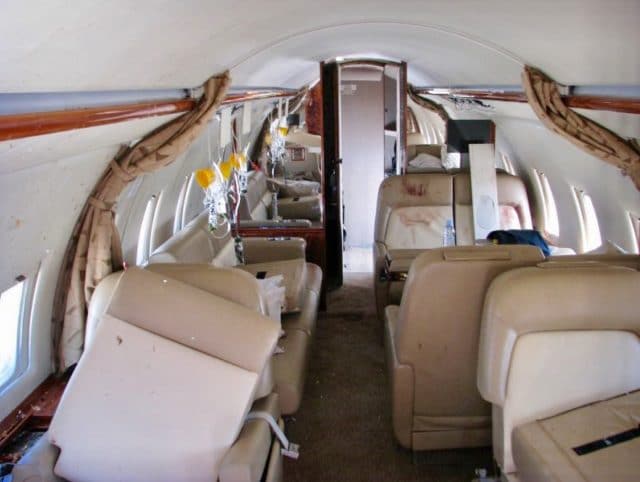 The flight attendant was standing in the middle of the cabin as the Airbus passed overhead. Four of the six passengers were out of their seats. It was obviously a very confused experience but her recollection was that the aircraft had turned three times around its longitudinal axis. She was thrown against the ceiling and the seats, breaking her nose in the process. The four passengers out of their seats were also thrown violently around the cabin. One suffered head injuries and a broken rib, another fractured a vertebra. The armrests of the front four seats fractured and bent. The seats and the panelling were damaged and covered with blood. Oxygen masks fell from their casings.

With the sky and the water both the same shade of blue, the captain said that he was only able to recognise which way was up by finding the clouds.

Finally, the captain regained control and the pilots managed to reactivate the Inertial Reference Systems using a memorised checklist. Thirty minutes after the Airbus 380 had passed over them, they were flying straight and level again. The flight attendent informed the pilots of the situation in the cabin and attempted to reassure the passengers.

The captain contacted Mumbai air traffic control and declared an emergency, reporting their position, altitude and their intention to divert to Oman.

The flight crew restarted the engine and initiated a climb to FL250 (25,000 feet). It was over an hour after the initial upset that they were able to re-engage the autopilot and resume normal flight.

Mumbai ATC contacted Omani ATC to let them know that the CL604 was at FL230 and diverting to Oman, initially explaining that the low altitude was because of an engine failure.

The Airbus A380 continued to Sydney without incident. 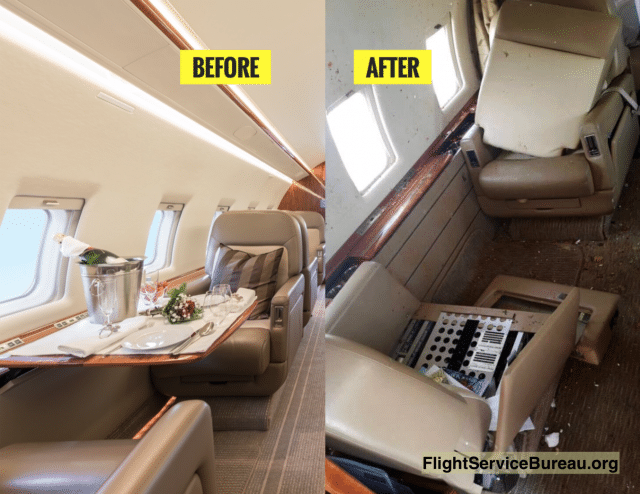 After landing, four passengers were transported immediately to the hospital in Muscat. Two other passengers and the pilots, all of whom were seated with seatbelts on at the time, were unharmed.

Such encounters have very low probabilities, but controllers and pilots should be aware that if they occur then the encountering aircraft may experience significant accelerations.

Though this is not an A388 specific issue, and it is beyond the scope of this group, the Work Group strongly recommends review, as a matter of urgency, of spacing for non-Heavy encounters that climb or descend behind all Heavy aircraft generators (including the A388).

It’s uncomfortable to think that fourteen years later, and ten years after the Airbus A380 was introduced into commercial service, this urgent issue was not reviewed. It seems that a dangerous incident had to happen for the risk of heavy wake turbulance to be revisited.

The final report isn’t due until January 2018 but I think it is safe to say that the BFU will be pushing for reconsideration of the minimum separation in light of the wake vortex of modern heavy aircraft like the Airbus A380.

You can read the preliminary report on the BFU website.