On the 23rd of May 2021, Ryanair Sun flight FR-4978 departed Athens, Greece for a scheduled passenger flight to Vilnius, Lithuania with 126 passengers and six crew on board. The aircraft was a Boeing 737-800, registered in Poland as SP-4SM.

While crossing Belarus airspace en-route to Lithuania, shortly before its arrival, the northbound aircraft squawked 7700 and turned east to divert to Minsk, Belarus, according to some reports it was escorted by a Soviet-era MiG-29.

It is interesting to note that the aircraft was said to be at FL390 (39,000 feet) at the time, that is, it had not begun its descent to Vilnius while still in Belarusian airspace.

Ryanair quickly released a statement which stated that the crew were notified by Belarus ATC of a potential security threat on board and were instructed to divert to the nearest airport, Minsk.

The crew on a Ryanair flight from Athens to Vilnius today (23 May) were notified by Belarus ATC of a potential security thread on board and were instructed to divert to the nearest airport, Minsk.

The flight data on flightrader24 shows that the aircraft was closer to Vilnius than Minsk at the point of its diversion. 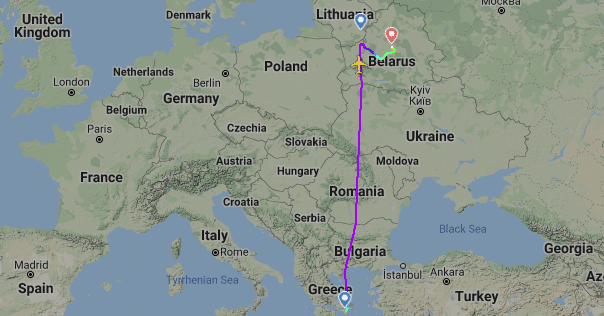 The Boeing 737 remained in Minsk for about seven hours before departing for Vilnius. Five of the passengers who had been on the scheduled flight did not continue with the aircraft. The flight landed safely at Vilnius International Airport at 18:25 UTC with 121 passengers on board.

Belarus media reported that a MiG-29 had escorted the jet to Minsk in response to a bomb scare but no explosives were found. Belta, the state-owned news agency, reported that President Alexander Lukashenko had personally given the order for the aircraft to land in Minsk.

Nexta, a Belarusian media outlet based in Poland, broke the news that their ex-editor, journalist and dissident Roman Protasevich, who was wanted by the Belarusian authorities, had been on the flight returning home after a holiday in Greece with his girlfriend but they had not arrived in Vilnius with the aircraft.

Arriving passengers confirmed that Protasevich had been detained in Minsk and looked “super scared”.

One of the passengers who was identified as Raselle is cited in numerous articles of having posted photographs and videos to Instagram showing the diversion. Her Instagram account does not have any such content that I can see although some of the photographs have been republished on Twitter.

Belarus: insta-stories by one of the passengers on board #FR4978.

Protasevich apparently begged the @Ryanair crew not to hand him over. They told him "we have no choice, it's in Ryanair legal agreements" pic.twitter.com/AfRt2uYSHv

Belarus denied accusations that they diverted the aircraft in order to make the arrest. Officials claimed that they’d received an emailed bomb threat from Hamas (Islamic Resistance Movement), a Palestinian fundamentalist militant group considered by most of the Western world to be a terrorist organisation. Hamas have denied any connection to the event.

Roman Protasevich was well-known as the ex-editor-in-chief of Nexta and Nexta Live, which offer political news over social media (Telegram, Twitter and Youtube). Their primary Telegram channel shows over 1.3 million subscribers. Nexta’s encrypted Telegram channels became a main source for organising and exchanging information about the mass protests after the presidential elections last August, which the opposition believe to have been rigged. Protasevich is now the editor of Belamova, another Telegram channel, which has been outlawed in Belarus as an extremist organisation. According to RT.com Belarus previously asked Poland to hand over Protasevich for inciting social enmity and discord but Poland did not respond. Protasevich is Belarusian but has been working from Poland and more recently Lithuania. He is on a terror list distributed by the KGB, the Belarusian secret service.

President Lukashenko said that Nexta consisted of western strategists plotting against Russia. “Their goal is to dissolve the Belarusian people and move on to smothering their arch-enemy: the Russian.” He went on to say that he had considered shooting down the Ryanair flight for fear of a bomb on board exploding near a Belarusian nuclear power plant but that the seven-hour delay was not enforced but was the result to the Ryanair crew not wishing to leave.

The opposition leader Svetlana Tikhanovskaya, who ran against the standing president and is currently in exile in Lithuania, said that Protasevich would face the death penalty as a terrorist. She has called for Belarus to be expelled from the International Civil Aviation Organisation.

Micheal O’Leary, the CEO of Ryanair, called the incident “state-sponsored hijacking” and broke the news that a further three passengers did not return to the aircraft at Minsk. He claimed that Belarusian secret service agents (KGB) were offloaded at the airport. The Irish Foreign Affairs Minister made a similar statement.

Only one or two people were actually arrested so that certainly would suggest that a number of the other people who left the plane were secret service. We don’t know from what country, but clearly linked to the Belarusian regime.

The Greek prime minister responded that they have no evidence that any secret service, Belarusian or otherwise, boarded the aircraft in Athens.

We have no indication there were KGB agents or any security service agents on board the plane. None. Zero. And we investigated it very carefully.

Belarusian state television stated the three passengers, two Belarusian and one Greek, simply elected to stay in Minsk rather than continue to their original destination of Vilnius. Bloomberg contacted the Greek national, who confirmed that he had chosen to stay, although he said he wasn’t aware of the arrest at the time.

“I was flying to Minsk anyway, with an evening connection in Vilnius,” Zisis said on LinkedIn. After the interruption, as passengers lined up to return to the aircraft, “I stood at the back of the queue and I asked to stay, and they allowed me.”

He told Bloomberg that the journalists were the first to contact him and no one from the Greek government had confirmed his safety after he failed to arrive at Vilnius.

Lithuania’s police chief has stated that they are working to confirm the identities of the three passengers in question.

The CAA Belarus released a statement quoting an email received via ProtonMail, an end-to-end encrypted mail service based in Switzerland.

Newlines Magazine reported that they had obtained a copy of the email which, they say, is time-stamped after the crew was told of the threat.

“Allahu Akbar” runs the subject line of the email, the sender of which was [email protected] “We, Hamas soldiers,” the email continues, “demand that Israel cease fire in the Gaza Strip. We demand that the European Union abandon its support for Israel in this war. We know that the participants of Delphi Economic Forum are returning home on May 23 via flight FR4978. A bomb has been planted onto this aircraft. If you don’t meet our demands the bomb will explode on May 23 over Vilnius.”

Adding to the fact that the message was sent after the mid-air bomb theatrics unfolded, the sought-for cease fire referenced in the email had already taken effect on Friday, two days before this communique was sent.

Although some news sources have cited ProtonMail as releasing the information that the email was transmitted after the crew had already initiated the diversion, ProtonMail have responded that the email was not leaked or obtained from ProtonMail. The statement continues only to say that ProtonMail are supporting the European authorities in their investigations as required legally on the basis of an official request from the Swiss government.

The Belarusian CAA has released a transcript of the interactions between the flight and Minsk control which has as yet not been confirmed by any other sources.

As an evidence of the fact that the pilot-in-command took his own decision to land at National Airport Minsk without any pressure from Belarusian side, we published the extract of ATC-pilot radiotelephony.

The following is a formatted version of the transcript as released by the Belarus CAA (unconfirmed). You can see the original transcript on the CAA statement (scroll down for English): http://caa.gov.by/ru/news-ru/view/1-203/:

This isn’t the first case of an aircraft being diverted for political reasons. In 2013, Bolivia President Evo Morales’ aircraft was on a flight from Moscow to Bolivia amid rumours that American dissident Edward Snowden was onboard. The aircraft landedin Austria with a low fuel emergency after having been refused entry into French, Spanish and Italian airspace. It is unclear if the aircraft was searched but certainly, soon after it landed, the Austrian president greeted Morales in the plane and shared breakfast with him, after which the flight was allowed to continue on its way, with all of the involved countries sending apologies and official explanations to the Bolivian Government. Morales accused the US of crimes against humanity. Two years later, Julian Assange of Wikileaks claimed that he had deliberately leaked the false information that Snowden was on the aircraft. A longer piece comparing the two incidents has been written by Glenn Greenwald; I am unfamiliar with him and I personally feel the two situations are not as equivalent as he makes out, but he gives a fair amount of detail on the sequence of events and the international reaction: As Anger Toward Belarus Mounts, Recall the 2013 Forced Landing of Bolivia’s Plane to Find Snowden

Meanwhile, a PDF supposedly from Ryanair OpsGroup to its crew offers a quick rundown of the event and makes the point that the event is not unprecedented.

It’s not a routine event for a country to force an overﬂying aircraft to land, but it’s also not as rare as you might think. Usually, a forced landing and/or ﬁghter intercept occurs because of unpaid navigation charges, or the lack of an overﬂight permit. Each country publishes intercept procedures, so that pilots know how to respond to a military interception. Indonesia is well known for this, and it doesn’t usually make headline news, but it did in 2019 when they forced an Ethiopian Airlines aircraft to land in Bantam. In 2016, Iran forced a Fly Dubai aircraft to land in Iran, following confusion about its ﬂight plan. Peru is also known for forcing enroute aircraft to land because of issues with overﬂight permits.

US President Joe Biden condemned the diversion and the arrest.

This outrageous incident and the video Mr. Pratasevich appears to have made under duress are shameful assaults on both political dissent and the freedom of the press.

The UK, Lithuania and France immediately denied the Belarusian national carrier entry into their airspace. Poland’s Prime Minister said, “Hijacking a civilian plane is an unprecedented act of state terrorism that cannot go unpunished.” The Latvian Foreign Minister called for Belarusian airspace to be closed for all international flights.

The following day, the European Union agreed to prohibit EU-based airlines from flying through Belarusian airspace and Belarusian carriers from flying into EU airspace. A number of other countries have since followed suit.

The ICAO confirmed yesterday that they are undertaking a fact-finding investigation as to whether there has been a breach of international aviation law, citing Article 55 (e) of the Chicago Convention.

The Chicago Convention was signed in 1944 and set the purpose of the ICAO to allow for international air navigation standards. Article 55(e) states:

The Council may:
Investigate, at the request of any contracting State, any situation which may appear to present avoidable obstacles to the development of international air navigation; and, after such investigation, issue such reports as may appear to it desireable.

The question is whether this could lead to the expulsion of Belarus from the ICAO.

Wow. What a mess.