Today I discovered a YouTube channel called What You Haven’t Seen with quite a bit of background information on a crash that I’ve been reading up on. I’m not ready to write about that one yet but I thought you all might be interested in another video from the channel, posted just yesterday.

The text accompanying the video is a short form of the NTSB full narrative of the incident CEN16FA341:

On August 31, 2016, about 0930 central daylight time, a Beechcraft A36 Bonanza, N8283D, was destroyed when it impacted a hangar during an attempted takeoff from runway 18 at the Bentonville Municipal Airport (VBT), Bentonville, Arkansas. The pilot, who was the sole occupant of the airplane, was fatally injured.

The airplane was destroyed by impact forces, which included an explosion and fire. The A36 Bonanza had been registered to and was being operated by the pilot as a Part 91 personal flight, and visual meteorological conditions prevailed for its unfortunately short duration.

The pilot of another airplane reported that, while approaching VBT, their flight had been authorized by approach control to change to the VBT common traffic advisory frequency (CTAF). He stated that after changing frequency, he transmitted over the CTAF his intent to land on runway 36. The pilot stated that the approach controller advised him that no traffic was observed at VBT, and the pilot heard no radio transmissions from other aircraft during the landing approach.

The accident airplane became airborne, pitched nose-up then nose-down twice before rolling left and impacting a hangar, and the pilot of the plane still on the runway called 911.

The 70-year-old accident pilot held a private pilot certificate with airplane single-engine and multiengine land ratings. His most recent Federal Aviation Administration third-class medical certificate had been issued on March 11, 2015, with a limitation for corrective lenses. The pilot reported no medical conditions and no use of medications to the FAA. At the time of his medical examination, the pilot reported 1,389 total hours of flight experience.

As you can see in the video, the aircraft impacted the hangar about 1,900 feet from the north end of the runway. The aircraft exploded and the cabin and inboard wing sections of the aircraft were destroyed. The hangar was damaged by the fire, not to mention the hole in the front wall. 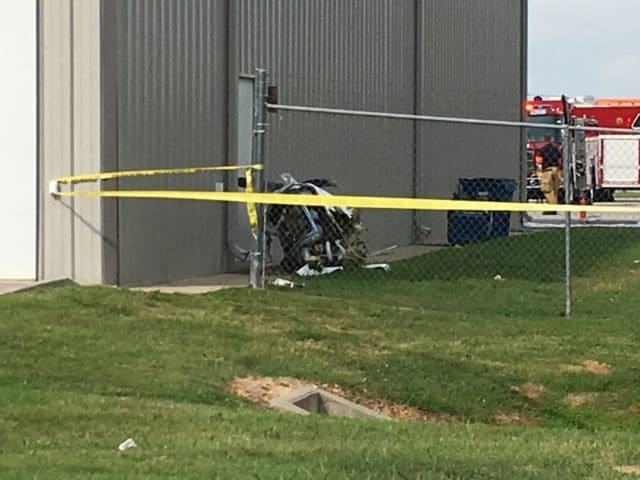 The aircraft’s engine was found next to the adjacent hangar. The remaining airframe came to rest in front of the hangar.

There was no evidence of any pre-impact structural failure and the aircraft had power at the time of impact. The pilot’s autopsy showed that the pilot had taken various medication, including one, temazepan, which is a sedative for insomnia which can cause drowsiness the following day, with a warning on the packaging not to drive or take part in other dangerous activities until the effects have worn off.

You can read the full details on the NTSB site.

So many of the YouTube aviation channels are ripped versions of news stories or ‘best crash ever’ compilations with no useful information, so I’m pretty glad to see someone who is providing new content with full details of the incident as well as the key information needed to look up the background.