This week the chilling dashcam video of a Boeing 747 crashing at Bagram airfield has spread across the Internet. I’m not sure there’s much to say about it at this stage but I can’t get it out of my head.

Here’s the details as I understand them.

A National Air Cargo Boeing 747-400 freighter on behalf of US Mobility Command, registration N949CA performing cargo flight N8-102 from Bagram (Afghanistan) to Dubai Al Maktoum (United Arab Emirates) with 7 crew and cargo consisting of 5 military vehicles, has crashed shortly after takeoff from Bagram Air Base’s runway 03 at 15:30L (11:00Z) and erupted into flames near the end of the runway within the perimeter of the Air Base. All 7 crew are reported perished in the crash.

National Air Cargo confirmed their aircraft N949CA with 7 crew, 4 pilots, 2 mechanics and a load master – initial information had been 8 crew -crashed at Bagram. The airline later added, that the aircraft had been loaded with all cargo in Camp Bastion (Afghanistan, about 300nm southwest of Bagram), the cargo had been inspected at Camp Bastion, the aircraft subsequently positioned to Bagram for a refuelling stop with no difficulty, no cargo was added or removed, however, the cargo was again inspected before the aircraft departed for the leg to Dubai Al Maktoum.

The NTSB reported the Boeing 747-400 was operated by National Air Cargo and destined for Dubai Al Maktoum when it crashed just after takeoff from Bagram and came to rest within the boundaries of the Air Base. All 7 occupants, all American citizens, were killed.

It’s been said that the aircraft was carrying four or five MRAPs (an armoured fighting vehicle) and that one of the flight crew reported “load shift” on the radio directly before the crash, but I’ve not been able to verify either of these statements.

The aircraft was a Boeing 747 registration N949CA. Here’s a video of it landing at Amsterdam from earlier in the year:

Two reconstructed angles of the National Air Cargo 747 that crashed in Afghanistan on April 29, 2013. Created by object-tracking the original footage to create a flightpath (Audio simulated).

National Air Cargo will not speculate as to the cause of the accident involving National Flight NCR102. With our full cooperation, an investigation by appropriate authorities is under way, and we encourage everyone to join us in respecting that process and allowing it to take its appropriate course.

Here are some facts regarding the aircraft and its movements prior to the accident:

Please visit www.nationalaircargo.com for updates regarding this tragic accident. Media inquiries can be directed to [email protected].

It’s not quite clear to me why an aircraft travelling from Camp Bastion to Dubai would go to Bagram for refueling: 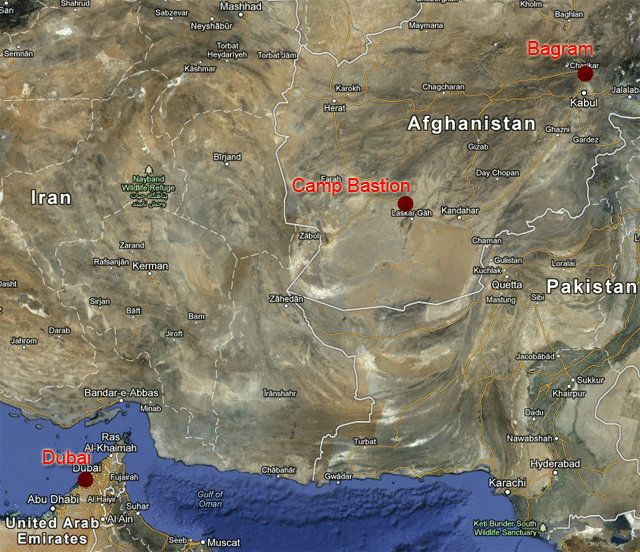 The fact that the gear was down indicates that the crew was experiencing problems immediately after takeoff that focused their attention elsewhere. From the video, you can see the aircraft’s speed was deteriorating. There is a transient smoke stream from the engines just before the stall, which is an indication of an acceleration of the engine core’s RPM – the crew were likely firewalling the throttles. There was a light dip of the left wing at the beginning of the stall. The pilot likely countered with right rudder, a correct but excessive input that caused the aircraft to enter a spin to the right. At this point, airspeed appears to be nearly undetectable but probably around 100 knots.

Swept wing aircraft, especially ones with high angles of sweep like the 747, pitch up at the last moment of a stall before the nose drops and airspeed is recovered. In the video, the nose does not drop until the aircraft is on its side and rapidly losing altitude. Once the aircraft is on a knife-edge, the airflow will cause the vertical stabilizer to weather vane. This brings the nose down. During this time, the right rotation also stops. If there had been an engine failure, the rotation would have continued in the direction of the failed engine. As the wings are brought level, the nose down attitude remains stable through impact. At this point, there are vapor trails from the horizontal stabilizers and wing. This indicates a high pressure differential which is clearly from the high angles of attack on the surfaces.

The crew had a controllability problem that was present from rotation. Pilot training and instinct is to lower the nose if the aircraft is pitching up. This wasn’t possible. To put this aircraft in the position it was would have required excessive nose up elevator or excessive rear Center of Gravity (CG). Since this was a routine flight and the aircraft had not likely had major maintenance causing a critical failure of the flight controls, a rear CG is the likely problem.

This is also indicated on the final moments prior to impact. Had the CG been in the proper location, the nose down pitch would have continued as the CG forward of the wing’s lift would have accelerated towards the earth from gravity while the wing resisted this acceleration due to airflow (drag) on the wing, even with a major failure of the trim or elevator. Just prior to impact, the pitch remains mostly stable, indicating the CG was between the wing and tail, and the weight on each was proportional to the lift being generated. The proportion of the surface area of the wing to tail surface would be equal and inversely proportion of the CG between them. IE: if the surface area was 70% wing and 30% tail, the CG would be 30% back from the wing, or 70% forward of the tail.

There are many other possibilities, example pilot error. Though this is unlikely, these must be considered until conclusively found otherwise.

The Ministry of Transportation and Commercial Aviation in Afghanistan is investigating, joined by the American NTSB.

A devastating accident and heartbreaking video. I wish there were some result that could make it less tragic.