Both of these accidents appear to have been the result of aircraft unable to cope with the serious bad weather in which they found themselves. It is too early to know what decisions might have been made in order to avoid the fatal weather conditions.

This news is especially disturbing after last week’s loss of Malaysia Airlines flight 17 which was shot down by a missile. “It’s a bad week for those frightened of flying,” said one media outlet.

It’s true, the past seven days have seen a shocking loss of life owing to fatal aircraft disasters. The front pages of newspapers around the world are covered with the aftermath of these tragic flights: MH17 Ukraine Crisis! Mali Air Crash! Taiwan Crash Details! Each one another death toll. But why now? Why are all these planes crashing around us?

Here’s the thing: The pace of the crashes right now is shocking. But looking at 2014 as a whole, the numbers aren’t extreme. It will be some time before we can sensibly think about long-term trends or whether 2014 itself was a bad year.

I’m reading (and writing) about crashes all the time. Terrible crashes, pointless crashes, crashes where everyone on board died. The difference is not that flying is a lot more dangerous than we thought it was. The difference is Malaysia Airlines flight 370.

The disappearance of Malaysia Airlines flight 370 gripped the world, and rightly so. It’s been over four months and we still have no answers. We simply have no idea what happened that day. CNN covered the search and investigation 24×7 in the weeks following the investigation and I still regularly get asked as to my opinion on the crash as a conversation starter when I mention that I write about aviation. It’s a high-profile, horrendous case and worse, completely unsolved.

In May, coverage tailed off a little bit but every scrap of news still made the front page. In June, details of the Australian search parties were the only news that offered any insight into this unbelievable mystery. It seems incredible that an aircraft could just disappear like that. It is incredible and I find it hard to accept that we might never know what happened.

Last week, the first thing I heard about MH17 was that Malaysia Airlines had “lost contact with another plane”. I’ll tell the truth: my stomach lurched. My thoughts were barely coherent: my god, it really is a plot, there’s someone stealing planes, who would do this, how are they doing this, what the hell is happening?. However, it almost immediately became clear that the aircraft was not “lost” in the sense of an aircraft flying without radar contact and other communications. As the horrifying truth came out, it also became obvious that the fact that it was Malaysia Airlines was a horrific coincidence: it could have been any one of a number of different airliners in the area at that time.

The silence from TransAsia Airways flight 222, a domestic flight, was immediately identifiable as a crash however, news reports refer to the control tower losing contact with the aircraft. And then yesterday, I was inundated with reports of an aircraft that was lost: disappeared off radar, no communications. Of course, Air Algérie flight 501was lost, as it had possibly broken up in the air and certainly crashed with no survivors. But I was struck in both instances by the media focus on the loss of contact, almost as if the aircraft were possibly still out there and flying. And I was intrigued by the press coverage: quite frankly a lot more than I would expect for foreign aircraft disasters.

I put together some figures to try to get a handle on whether the number of accidents this year (as opposed to this week) was typical or if we are seeing a spike in air crash disasters.

I started by going through the Aviation Safety Network’s database and analysed through the occurrences per year, that is, including all aviation accidents and incidents that were reported. There have been a total of 85 occurrences so far in 2014 so I looked at the previous four years to see if this was unexpectedly high. I also checked the information for 1994 just for a quick comparison: over the same time period, there were 115 occurrences in 1994, by far the most per year. 1984, in comparison, dropped to 90 – still more than 2014 for the same time period but well within recent averages. 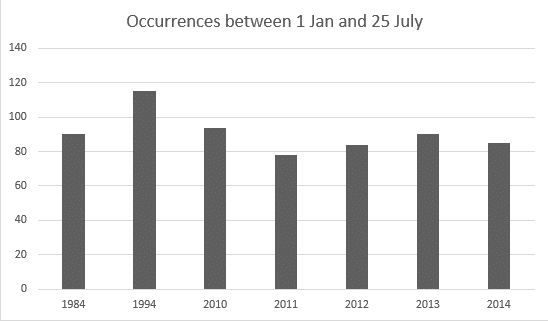 The result shows that 2014 is not (yet) a particularly bad year for aviation issues. But the numbers above include all kinds of incidents, whereas what we’ve been seeing this year are fatal air craft disasters. So I decided to focus on fatalities. Aviation Safety Network have a list of the worst 100 accidents which they have ranked based on the number of fatalities. Of the fatal accidents in 2014, only two made the list: the loss of MH17 over Ukraine with 298 fatalities and Malaysia Airlines flight 370 with 239 fatalities. 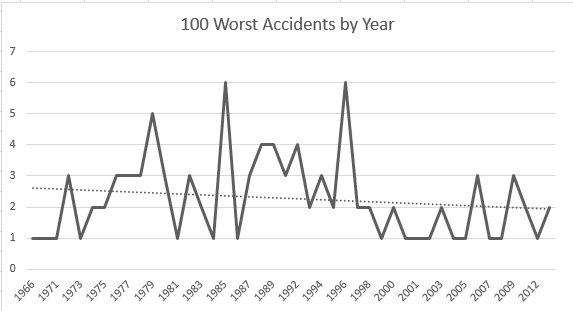 I half-expected to see that the worst crashes were recent as aviation becomes more of a mass transit option: we’re squeezing in more passengers per square metre than ever before and planes are getting bigger. But actually, the worst accidents broken down by year is trending downwards (see the dotted line).

Finally, I looked at the Aviation Safety Network fatality rates. Here’s where we can see a worrying trend. In 2014 so far, there have been twelve accidents with a total of 761 fatalities. Over a ten-year period, Aviation Safety Network reports an average 17 accidents with 376 fatalities between January and July. The average for the full twelve months over the last ten years is 676 fatalities, so we can see that we’ve already bypassed the annual average for fatalities… and 2014 still has another five months to go. Based on these figures, fewer planes are crashing but there are more fatalities. That’s not hard to analyse. This is a direct result of the two Malaysia Airlines disasters both of which individually count among the 100 highest fatalities ever. Those two flights account for 537 fatalities between them, just over 70% of the 761 fatalities for the year. The two most recent crashes this week would not have caused a blip on these stats.

That’s not to say that the past seven days haven’t been an extremely bad week for aviation, nor to imply that some crashes and loss of life are more serious than others. But the big reason that I think flying suddenly seems so dangerous is that the recent two crashes were reported as international news and in other years, they wouldn’t have been.

I would expect to talk about these crashes at an airfield or on an aviation forum. I would certainly read up on them myself and consider whether to analyse them for the Why Planes Crash series. There are hundreds of aviation accidents every year that I don’t write about, which was part of the point of Why Planes Crash. It gives me the opportunity to cover interesting aviation accidents which didn’t involve a large number of fatalities and/or happened in foreign countries and/or didn’t have someone famous on board. These accidents are under-represented on the aircraft disaster television shows and even on Wikipedia, with the result that most people have never even heard of them.

In the West, we tend to talk about 9/11 as the tragic accident that changed aviation security forever. However, in China, the date that connects to aviation history happened half a year later on the 7th of May 2002. The events of that day, now simply referred to as 5.7, changed airport security for ever. And yet, outside of aviation communities, that flight number and date are rarely recognised as important.

The point is that I wouldn’t expect to see these week’s crashes, as tragic as they may be, on the front page of newspapers around the world.

Now, obviously I’m heavily in favour of aviation being covered in the mainstream news. And the media supply the news that people are interested in; I’m certainly not trying to imply some kind of media conspiracy. But what scares me is the comments: aviation is getting more dangerous, so many planes have crashed this year, I’m never flying again, something is going horrifyingly wrong. 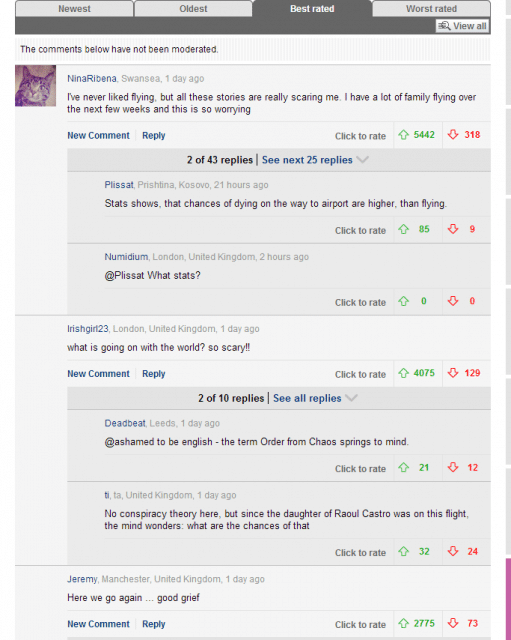 And I think it comes down to this: this year, the most unbelievable aviation disaster happened: we lost a commercial aircraft, a Boeing 777 with 239 souls on board, and we don’t know what happened to it nor where it went. The idea of losing contact with an aircraft has become an emotional trigger and so now these crashes — devastating to the survivors of those poor souls but not usually at the centre of attention — attract our immediate attention.

The phrase “contact was lost” has become an emotional trigger. The crashes this week are front page news because the entire idea that we could lose an airliner is in our conciousness and on our minds. These sad crashes are isolated events in the aviation community. They all have different causes. They are tragic, of course they are, but they aren’t a sign of the apocalypse.

If I could talk to everyone reading these articles and feeling full of fear, I would take their hands and say just this: Flying isn’t more dangerous this year than it was last year. You’re just paying more attention.