Always climb straight ahead to 500 feet before turning?

Captain Jon is a professional flying instructor based at Halfpenny Green in Wolverhampton. He’s a former LHR Airbus pilot turned instructor and has trained Sir Richard Branson, Nigel Mansell, and Jasper Carrot, among others. I first encountered him because of his Ask Captain Jon web site where he talks not just about learning to fly but also about how a good pilot never stops learning. He includes himself in this:

Instructing teaches you that students do the most amazing things, things you wouldn’t expect. In particular they can easily get mixed up in a high work load situation. I remember once sitting in a Cessna on base leg staring out of the side window thinking to myself what a great summer’s day. I wasn’t paying full attention to the student, I admit. I was thinking how peaceful and quiet it was up here until I suddenly realised why it was so quiet. The student had pulled back the mixture control instead of the throttle and we were in fact a glider–he had shut the engine down!

I’m hoping I’ll get to go flying with him one day but in the meantime, I still enjoy reading his blog and I think you will too. That’s why I’m very pleased that he’s agreed to be a guest poster here on Fear on Landing while I sort out my computer problems.

Please give a warm welcome to Captain Jon!

My instructor told me, ‘ Always climb straight ahead to 500 feet before turning’!

Perhaps he never flew off Runway 23 at Cambridge?

When you are learning to fly, you are initially taught to fly by numbers. It’s simpler and safer. The only problem with this type of elementary teaching is that it doesn’t encourage the situational awareness and good judgment which is essential for safe flight.

Determining the threat and errors that can occur at any stage of flight and managing them.

I should point out that threat and error management is required teaching for all part FCL flying licences, including the PPL (this seems to be unknown by many instructors)

One of the biggest threats to any aircraft, regardless to how many engines it has, is an engine failure on take off. If you mismanage this type of failure by error the consequences are likely to be extremely serious.

In a multi engine aircraft capable of continued SE flight the main decision is to manage the situation so as to allow the aircraft to continue to fly the take off path. In a single engine aircraft that is not going to be an option, so part of the decision has already been made for you, if the engine fails you are going to have land somewhere! You primarily just need to manage that landing so as to minimise the damage to the aircraft, yourself and any passengers.

The first thing to understand very clearly is that the area ahead of the aircraft is very likely going to be unsuitable for a light aircraft to make a perfect approach and landing that you can just walk away from to the sound of applause from astonished locals. You need to be very realistic here as the aircraft is very likely to be damaged, what we to achieve is the minimum damage.

In July 2011 a Piper Tomahawk taking off from Manchester Barton suffered an engine failure. This was the outcome. 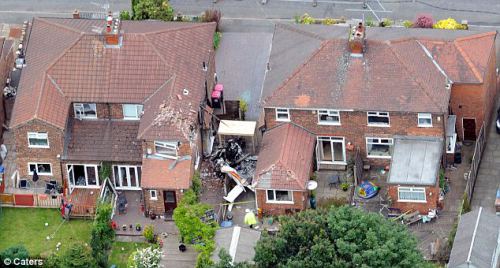 Amazingly the passenger survived this accident although he was very badly burnt, the pilot was killed. The aircraft was apparently in a stalled condition when it hit the side of the house. This very sad accident can teach us many lessons.

The first most important one is that it is essential to arrange your flight path on take off to put you in the best possible position should you suffer an engine failure. This very important obvious plan of action has never been given much attention by single engine flying instructors.

The third lesson is that it is essential to keep the aircraft under control, this aircraft clearly wasn’t; it was stalled. No pilot would consciously fly into the side of a house!

The second lesson is that it is essential to try to keep the cabin intact in any off airfield landing.

The fourth lesson is that in any emergency situation at low-level you need to act quickly, correctly and decisively.

Single engined aircraft will have a very critical flight path with an engine failure after TO below 500 feet.

Many airfield take off paths will have a less than ideal landing areas ahead of the aircraft.

Most PPL’s are low houred pilots with the minimum experience of emergency procedures and mostly have had zero refresher training.

The element of surprise can be one of the greatest factors in preventing a successful outcome to any emergency. An emergency that comes as a total surprise is always harder to deal with.

The last two above are most common cause of engine failure in light single engine aircraft.

The successful outcome to any emergency situation can only be enhanced by good planning and training.

If you’d like to read more of Captain Jon’s analyses, head on over to Ask Captain Jon’s Flying Training Help Pages where you’ll find lots more like this. Let him know that Sylvia sent you.