There’s some odd news today which had me scurrying for the original accident report in order to make sense of a court case against two Air Traffic Controllers in Taiwan.

TransAsia flight 222 crashed near Magong Airport on the Penghu archipelago on the 23rd of July in 2014.

The Aviation Safety Council (ASC) released their final accident report on the investigation of the flight at the end of January of this year.

It was a scheduled domestic flight which from Kaohsiung International Aiport to Magong Airport. The aircraft was an ATR-GIE Avions de Transport Régional ATR72-212A （ATR72. There were 54 passengers on board, along with two flight crew and two cabin crew. Typhoon “Matmo” was a tropical cyclone which brought typhoon force winds and torrential rainfall to the area. The storm reached its peak intensity the day before, with maximum sustained winds of 155 km/hr (84 knots, 100 mph) with gusts of 212 km/h (115 knots, 132mph). It was on a northwesterly track, emerging over the Taiwan Straight early on the morning of the 23rd. 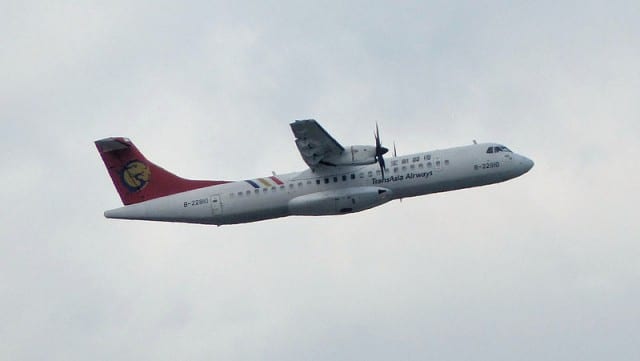 The Magong Airport meteorological report (METAR) released at 18:00 showed winds at 17 knots gusting to 27 knots with visibility 800 metres in heavy thunderstorms with rain. The clouds were scattered at 200 feet, broken at 600 feet with cumulonimbus (thunder clouds) at 1,200 feet and overcast at 1,600 feet.

Mahgong Airport has a single runway, runway 02/20. Runway 02 has an instrument landing system (ILS) and the landing visibility limitation is 800 metres.

The runway in use that evening was runway 20 which included a VOR non-precision approach system and required a landing visibility of 1,600 metres.

The aircraft entered a holding pattern at 18:11. During the flight, the captain commented that he was very tired and yawning can be heard on the cockpit voice recording.

At 18:27, the Magong Tower Controller informed the flight crew that the visibility was 800 metres. The wind was 200° at 12 knots gusting 16 knots: straight down the runway.

The flight crew discussed the possibility of landing on runway 02 with a tailwind. At 18:29, they requested radar vectors for the runway 02 instrument approach.

Magong Airport is a civil/military joint-use airport. A change in the active runway can only be authorised by the Magong Air Force Base duty officer. Three inbound aircraft requested runway 02 and the ILS approach as runway 20 was no longer suitable in the low visibility. The application was still under consideration when the 18:40 weather report showed that the visibility had improved to 1,600 metres.

At 18:42, while the flight crew were still waiting for clearance for the instrument approach on runway 02, Kaohsiung broadcast that the visibility for runway 20 had improved to 1,600 metres. Upon hearing this news, the flight crew requested the runway 20 VOR approach instead (as did the other two flight crew who had requested 02).

The air traffic controller issued headings (radar vectors) and a lower altitude. The Automated Weather Observation System (AWOS) runway visual range had dropped to 800 metres again but this was not broadcast to the flight crew. The tower controller was concerned that the Automated Weather Observation System visibility was different from the visibility as reported by the weather observer. The controller discussed this with the tower chief and agreed to use the visibility information as reported by the weather observer, which was 1,600 metres.

But at the time, 1,600 metres visibility was left to stand. At 18:55, the aircraft was flying at 3,000 feet about 25 nautical miles northeast of the airport and the flight crew were cleared for the VOR approach for runway 20.

The captain was the Pilot Flying and the first officer was the Pilot Monitoring. They descended to 2,000 feet and continued; the minimum altitude for overflying the final approach fix was 2,000 feet. Shortly before they overflew the final approach fix, the flight crew selected the altitude of 400 feet and started their descent. They didn’t conduct an approach briefing nor did they go through the descent/approach check lists.

The cockpit voice recorder picked up the sound of the windshield wipers increasing in speed; the aircraft probably penetrated the heavy thunderstorm rain in the area.

The 500 feet auto call-out sounded in the cockpit and the captain said, “Um, three hundred” as the aircraft passed through 450 feet. The selected altitude was set to 300 feet.

There was no discussion in the cockpit of the minimum descent altitude or whether to continue the approach.

The captain said “Two hundred,” as the aircraft descended through 344 feet. The selected altitude was set to 200 feet. The aircraft kept descending.

As it descended through 249 feet, the first officer said, “We will get to zero point two miles,” referring to the missed approach point

At 219 feet, the captain disengaged the autopilot and said, “Maintain two hundred.” The aircraft maintained an altitude between 168 and 192 feet for the next ten seconds as they searched, ignoring the minimum descent altitude. The flight crew who had landed previously said that there was a sudden heavy rainfall. The airport was in the middle of a heavy thunderstorm with the rain falling at 1.8 mm per minute. Visibility was down to 500 metres.

This is the point when the captain asked the first officer, “Have you seen the runway?” They had just passed the missed approach point. The yaw damper was disengaged without any comment, although this is a configuration change that should always be announced.

As they looked for the runway, the altitude, course and attitude of the aircraft began to deviate from the settings. The aircraft heading drifted from 207° to 188° as the aircraft went into a gentle left turn away from the approach course. The pitch angle went from 0.4° nose up to 9° nose down, then returned to 5.4° nose down. The aircraft descended.

Neither of the flight crew commented on any of this until they both shouted “Go around” at the same moment. The aircraft was at 72 feet.

The engine power was advanced to full but it was too late. The aircraft struck foliage (trees) 850 metres northeast of the runway 20 threshold and then crashed into a residential area.

The aircraft was destroyed. All of the crew and 44 passengers lost their lives. Ten passengers and five residents on the ground were injured but not fatally so. 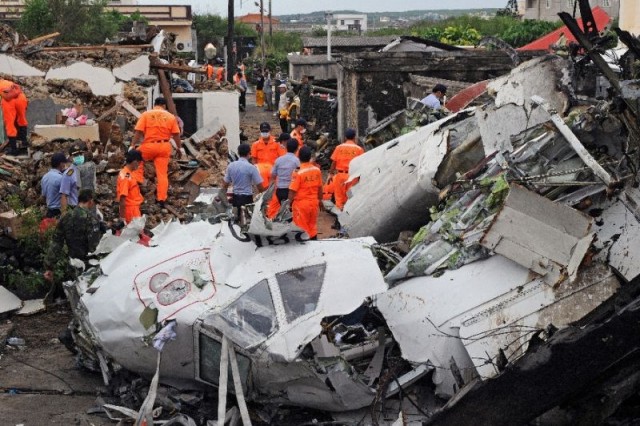 Investigators found that non-compliance with standard operating procedures was tolerated at the airline and that routine violations were normal. Flight crew were known to skip briefings and descend below minima while still looking for the required visual references. Even when the airline was under official observation as the result of this accident, crews tested on the simulator showed “significant non-compliance” with standard operating procedures.

The first officer, as Pilot Monitoring, was responsible for the flight’s safe operation and should have alerted the captain about every deviation from the standard operating procedures, instead of supporting the actions. He was not monitoring the aircraft’s altitude and did not highlight that they had descended to the minimum descent altitude, let alone challenge the decision to continue to descend.

The coordination at the airport was also an issue. I’ll quote directly from the report for this, as it relates to today’s news.

At the time of the occurrence, the mechanisms in place for weather information and runway availability coordination between civil and military personnel at Magong’s joint-use airport were less effective than what they could have been. In particular, the inconsistent information or discrepancies regarding airport visibility during the aircraft’s approach were unresolved. In addition, the rapidly changing AWOS RVR data was not communicated by the tower controller to the occurrence flight crew. Those inconsistencies meant that there was no collaborative decision-making relationship between the civil air traffic controllers, military weather observer, and flight crew. That resulted in the occurrence flight crew not being fully aware of the rapidly deteriorating RVR while on approach and the high likelihood that the RVR would not be sufficient for landing. Had the local controller provided the flight crew with RVR updates during the approach, it may have placed the crew in a better position to determine the advisability of continuing the approach. 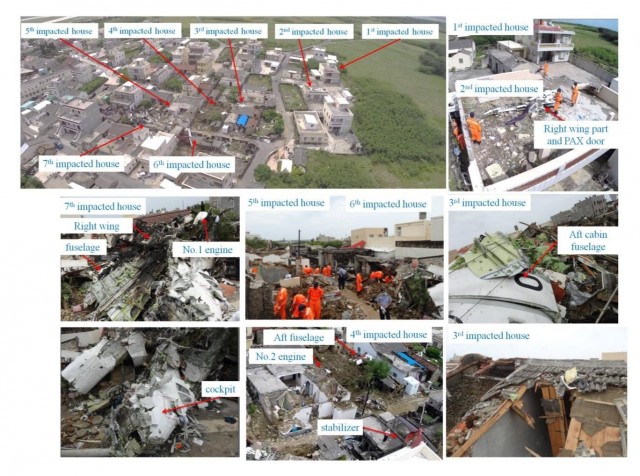 The investigation concluded that the deliberate flight below the minimum descent altitude was the primary cause of the accident. You can read the findings and the recommendations on the ASC website here: Aviation Safety Council Releases Final Report on TransAsia Airways Flight GE 222

The occurrence was the result of controlled flight into terrain （CFIT）, that is, an airworthy aircraft under the control of the flight crew was flown unintentionally into terrain with limited awareness by the crew of the aircraft’s proximity to terrain. The crew continued the approach below the minimum descent altitude （MDA） when they were not visual with the runway environment contrary to standard operating procedures. The investigation report identified a range of contributing and other safety factors relating to the flight crew of the aircraft, TransAsia’s flight operations and safety management processes, the communication of weather information to the flight crew, coordination issues at civil/military joint-use airport, and the regulatory oversight of TransAsia by the Civil Aeronautics Administration （CAA）.

Meanwhile, the reason this has come up today is because two air traffic controllers have been prosecuted in relation to this accident.

“The four people are found to have been negligent in their duties over this crash,” the Penghu prosecutors said in a statement on Thursday, referring to the two air traffic control officers and the pair of pilots.

The pilots will not be prosecuted, but ground staff in charge of air traffic that day are being sued for criminal negligence, which carries a jail term of up to five years.

Prosecutors said on Thursday that a senior duty officer at Magong, Ching, along with another member of staff Li, contributed to the crash by not allowing the plane to land.

This is disturbing because although there were clearly communication issues, the air traffic controllers were not in a position of “allowing” the aircraft to land and they certainly didn’t advise the flight crew to descend too low and continue to search for the runway in the rain. In fact, if anything, the controllers could have been more negative about the situation, by reporting the lower visibility figures. The aircraft was not low on fuel nor had the flight crew declared an emergency. It’s hard to see any sense in this court case at all.

Of course, the information so far has been minimal and perhaps it will look more sensible once more details come out but right now, I’m not liking the sound of this at all.