Taking Off In The Dark

On the 27th of July 2021, an Airbus A320, registration 9V-JSM, was scheduled for a passenger flight from Changi Airport in Singapore to Jakarta, Indonesia.

Changi Airport started operation in 1981 with just one terminal and one runway. Now, it is one of the largest transportation hubs in Asia with three runways and four terminals.

At about 20:00 (Singapore local time: UTC+8), the Airbus A320 was cleared to be pushed back. Sunset that evening was 19:16. The A320 taxied towards runway 20L, also known as the third runway. The captain was the Pilot Flying and the first officer was the Pilot Monitoring.

As the crew reached taxiway B1, the flight crew changed frequency from Ground to Tower. There were no other aircraft on approach or planning for departure. The Airbus A320 turned the corner and was issued take-off clearance from the Tower.They continued along taxiway B1 to A1 and entered the runway.

Rather than coming to a complete halt on the runway, as was the standard procedure, the flight crew continued directly into a rolling take-off.

The first officer’s first reaction was that they should ask ATC why the centreline lights were off. He didn’t say anything, though, but waited to see what the captain thought.

The captain pointed out that standard operating procedure did not actually require the centrelights to be on. The runway edge lights were on and the runway was visible and ATC had already given them take-off clearance. He told the first officer that he saw no reason to delay the take off. The first officer agreed both with his assessment of the situation and his conclusion.

Neither pilot had any recollection of checking that the runway end lights were on.

As the A320 lifted off from the runway, the pilots saw the runway edge lights turn off.

They contacted Tower immediately to report that both the runway centreline lights and the runway edge lights were off.

At Changi, it is left to the controllers to use their judgement as to when to turn on the airfield lights. However, that evening, the controller had been distracted by maintenance work which repeatedly caused an alarm to sound at her position. Each time it sounded, she was interrupted and had to press a button to silence the alarm. The maintenance work was from 19:26 to 20:34. The skies got darker but she believed that the view out of the tower windows looked normal. She had turned on the taxiway lights at 18:42 but somehow she had not noticed that she had not turned on the runway lights.

She turned all of the runway lights on as soon as the flight crew reported the issue.

At the time when the aircraft departed, the sun had set and the moon had not yet risen. CCTV confirmed that the runway lights, including the edge lights, had been OFF while the aircraft was rolling for take-off.

There were no other aircraft waiting to depart or land. The Airbus A320 continued to Jakarta without further incident.

Initially, the incident was not reported; it was over 24 hours before the TSIB was notified. By then, the cockpit voice recorder had been overwritten. The TSIB did not request toxicological examinations of the pilots or the controllers as they would not reflect the situation that night. That said, there didn’t seem to be any reason to believe that the controller or the pilots were under the influence, other than taking off from a runway with the lights turned off.

The investigation team recreated the conditions by setting up a “night taxi trial” although, unlike the incident flight, they came to a full stop at the runway threshold. The night conditions were similar, with visibility of 10km and no moon, following the same route as the A320 had with the taxiway centrelights and edge lights on but with the runway lights off.

At the threshold of runway 20L, the test crew in the cockpit reported that when the lights were off, all of the lights in the background were completely distinguishable and did not cause confusion. From that position, it was clear that the edge lights, centreline lights and runway edge lights were off.

Various configurations were tested but in every instance, the observations from the test crew coincided with the actual state of the lights. They found no opportunity for confusion.

The conclusion from the night taxi trial was that, if the aircraft had come to a complete halt, as expected, and the crew had actually looked at the lights, then there is no reason why they should have been confused. 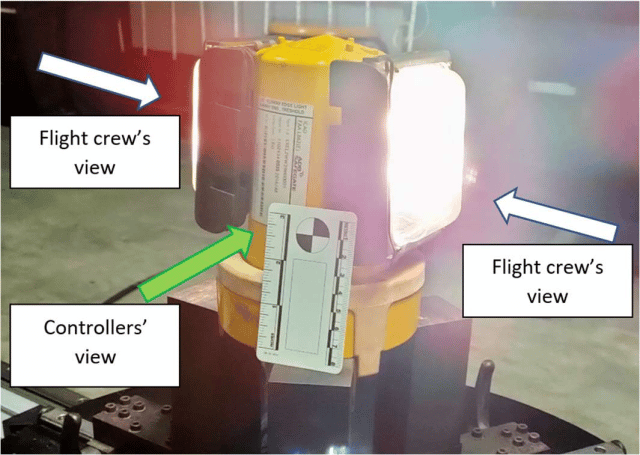 However, the situation from the controller’s point of view was a bit different.

That runway, the third runway to be built at Changi, has bi-directional edge lights with the main beams shining towards the flight crew from either end of the runway.

The other two runways have normal edge lights which can be seen from the control tower.

When the 02R/20L runway was commissioned in November 2020, the runway lighting system was assessed for flight operations. However, no one seemed to have considered whether the edge lights were easily visible by controllers in the tower.

At the same time, the new aerodrome lighting control and display system was commissioned. This system shows the controllers the positions of aircraft and ground vehicles and allows them to control the runway and taxi lights. The display shows the runway lights as ON or OFF as a display which is frankly a nightmare to clearly check the status.

There were a number of ways for controllers to report potential safety hazards, including an anonymous channel, but no controller had officially reported the issues with the display. The investigation found that most controllers didn’t even know about the reporting system; they said that if they wished to report a safety hazard, they would tell the safety officers or a manager. This informal system meant there was no tracking and that there would not necessarily be any follow-up. Having said that, the controllers interviewed for the report all said that they had not considered that the inability to see the status of the runway lights for runway 22L/02R was a hazard.

The flight crew maintained that the edge lights were on as they entered the runway and then turned off as they lifted off from the runway. However, the controller had not turned the lights on and the CCTV of the flight’s departure confirms that none of the lights were on.

The end lights of 22L were off but neither crew member could remember looking at the end of the runway, even though the red lights should have been clearly visible from the runway threshold. It seems that they suffered from a type of expectation bias: they expected the lights to be on and so they did not take in the information that the lights were off.

In the same way, the controller did not notice that she had forgotten to turn off on the lights. She did not notice when she looked out from the tower, which the report equally puts down to expectation bias, although from the tests they did, she would have needed to have been looking for the problem in order to notice.

The report does not investigate why the controllers were left to decide when the lights needed to be turned on rather than a set time or a warning if the lights have not been turned on after a certain threshold. There was nothing to alert the controller that she had not turned on the lights other than the flight crew, who did not notice until they had taken off.

Since the incident, the airline has run a training course on the subjects of assertiveness and active pilot monitoring. The airline has also added two points to the operations manual:

At the airport, the air navigation service provider has

They have also changed procedure. The lead controller now informs the Changi Tower Watch Manager when the lights have been switched on or off at sunset and sunrise. In addition, the controllers have been given a table of sunrise/sunset timings. A new alert system sounds near sunset to remind controllers to switch on the aerodrome light.

Finally, the air navigation service provider added a clearer graphical representation of whether the runway lights are on or off.

The final report concludes with two sets of Safety Recommendations.

It is recommended that the aircraft operator remind its pilots of the dangers of cognitive biases, and of the ways to mitigate the effects of such cognitive biases, when checking the status of runway lights. [TSIB Recommendation RA2022-001]

It is recommended that the Air Navigation Service Provider:

This seems to focus on the pilots assumption that the edge lights were on, rather than the fact that they did not follow procedure. They did not stop at the threshold after entering the runway but continued into a rolling start. Then, although both pilots realised that the centreline was out, neither pilot made a positive assessment of the end lights. The first officer considered asking the controller about the lights being off but did not speak up. The captain’s assessment of the situation did not take into account the end lights, which were required and were not visible. Already rolling, both pilots simply agreed to continue and that was the real issue, not whether they truly believed the edge lights to be on or off.

The final report fails to focus the operator on the critical factors. The failure to follow procedure and the lack of CRM are barely remarked upon and, more importantly, they do not figure in the recommendations from the report. Cognitive bias exists, of course, but the point of the procedures is to overcome this. A single refresher course on assertiveness and pilot monitoring does not seem like enough.

Leave a Reply to Jon