The AAIB has released a special bulletin regarding their field investigation of the helicopter which crashed into a crane at St George Wharf, Vauxhall, London on the 16th of January. The accident killed the pilot and a pedestrian. Additional people on the ground suffered serious injuries.

The special bulletin does not include any analysis. They’ve published the facts which have been determined up to now in a 10-page report which is available online: Special Bulletin S1/2013 – Agusta A109E, G-CRST.

The key information is the history of the flight and the transmissions from the pilot, which allow us to put together a picture of what happened that tragic morning.

Please remember that this is a special bulletin, not a final report, and details may end up being corrected or revised. Also, be aware that AAIB reports are to prevent future accidents, not to find someone to blame.

With that said, here’s what appears to have happened that morning in London, leading to the fatal crash at 07:59.

06:30 The helicopter pilot arrived at Redhill Aerodrome for a flight to Elstree, where he planned to pick up his client and another passenger and take them to the north of England. However, the local weather was not good.

He sent a text message to the client:

He followed up with a text message to the Operator:

07:06 The pilot phoned another pilot (referred to in the report as Witness A) to say that the weather at Redhill was clear and he was going to collect his passenger from Elstree. He said that there was fog at Elstree but he was going to fly overhead to see for himself.

07:18 The client called the pilot to discuss the weather. The pilot said that he thought the weather might clear earlier than forecast. The client agreed to drive to Elstree and call the pilot from there.

07:31 The client called the pilot to suggest that the pilot not take off until the client had reached Elstree and observed the weather there. The pilot replied that he was already starting his engines. It’s an odd turn-about of the standard pressure on a pilot that the only person putting off the flight is the client.

07:42 The helicopter passed London Heliport at 1,100 feet. It crossed the River Thames and turned left towards Holland Park.

07:43 The pilot sent a text message to Witness A

07:47 The pilot sent another message to Witness A

07:48 The helicopter pased Elstree Aerodrome and descended to 1,000 feet. It then climbed and turn back towards central London.

Witness A sent a message back to ask if he could land and got the response:

No hole hdg back to red

07:50 The client phoned London Heliport near Battersea and was told that it was open.

07:51 Thames Radar broadcasted the London City Airport ATIS information. Visibility at London City was 700 m, with a Runway Visual Range (that is, visibility along the runway rather than from the air) of 900 m, with freezing fog and broken cloud with a base 100 feet above the airport.

The pilot requested a route back to Redhill via the London Eye, which was approved, “not above altitude 1,500 feet VFR if you can or Special VFR, QNH 1012”

VFR is visual flight rules, that is, he must be able to fly visually and not be in fog. Special VRF is a clearance which can be given in a control zone to allow exemptions from some specific flight rules.

In this instance, there is the Low Flying Rule, which states, among other things, that an aircraft flying over a congested area of a city, town or settlement shall not fly below a height of 1,000 feet above the highest fixed obstacle within a radius of 600 meters of the aircraft. However, an aircraft on a special VFR flight is exempt from the 1,000 feet rule.

Note that in the UK, a Special VFR flight should only apply to an aircraft which is clear of cloud and with the surface in sight.

07:53 The helicopter pilot climbed to 1,500 feet for the transit over London. He’s under the main approach path to Heathrow, so he has to stay low.

The controller checked visibility with the pilot. “Rocket 2, do you have VMC or would you like an IFR transit?”

The pilot responded, “I have good VMC on top here, that’s fine, Rocket 2.”

VMC on top means that he’s flying above the cloud in visual conditions. He should be in sight of the surface, but from his previous text messages about not being able to see Battersea or find a hole, he wasn’t on the inbound leg. At this point, it’s possible that he was VMC on top over broken cloud and still able to see the terrain.

The pilot messaged the client:

and a second message to the operator:

Can’t get in Elstree hdg back assume clear still.

The client could drive from Elstree to Battersea and get there for 10, unless the traffic is particularly bad.

07:56 The pilot contacted ATC to ask if Battersea is open. They confirm that London Heliport is open. The pilot responds with “If I could head to Battersea, that would be very useful.”

The controller replied, “I’ll just have a chat with them, see what their cloud is looking like.”

07:57 The helicopter passed the London eye and the pilot contacted ATC. “Rocket 2, I can actually see Vauxhall, if I could maybe head down to H3…H4, sorry.”

H4 is a helicopter route which runs along the River Thames. He misspoke when he said H3, which is not surprising under the circumstances. A last minute diversion like this is a heavy workload. Note that if he can see the surface, then he can descend.

The ATC controller replied, “Rocket 2, you can hold on the river for the minute between Vauxhall and Westminster Bridges and I’ll call you back.”

The helicopter was flying south parallel to the river and began to descend after it passed Westminster Bridge. Quite frankly, I am not sure how a helicopter should hold over a river but this positioning seems a bit odd to me.

07:58 The controller contacted the pilot to say “Rocket 2, Battersea are just trying to find out if they can accept the diversion.” After the pilot acknowledged, the controller said, “And you can make it quite a wide hold, you can go as far as London Bridge.”

I’d have expected him to stay in a tight circle but then the controller seems happy for him to have a “wide hold” so maybe not. Helicopters confuse me.

The pilot flew along the river while descending down as low as 570 feet, then began a gentle climb again as he approached Vauxhall Bridge.

The pilot responded, “Lovely, Thanks. Rocket 2” The ATC controller passed on the Battersea frequency and the exchange ended.

07:59:18 At this point, the helicopter was approximately 150 m south-west of Vauxhall Bridge. The helicopter began a right turn to go back towards Battersea. He never had a chance to make the next call.

07:59:25 The helicopter struck the crane on the south side of the river 275 m from the south-west end of Vauxhall Bridge. 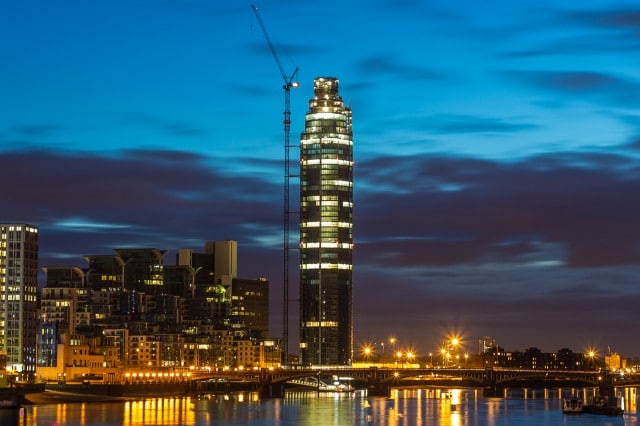 In this image from constructionchest’s Photos on SmugMug, you can see the crane and just about make out the red lighting at the top. This light is meant for visibility at night and not specifically for adverse weather conditions. It’s also possible that the building itself was visible in light fog but the crane was obscured.

The crane was a part of the construction of a new high-rise building at St George Wharf. The total height to the top edge of the crane (the tip of the “luffing jib”) was 719 feet above ground level.

On the morning of the accident, the top of the crane and the top of the building were obscured by cloud. Based on the provisional wreckage analysis by the AAIB, the helicopter collided with the crane at 682 feet above ground level.

There was a Notice to Airmen (NOTAM) relating to the crane which the pilot should have been (and probably was) aware of. The report gives a “plain language translation” of the NOTAM:

You can see the area and the tower in context on this panorama of London taken last year:

Face due south and you will see the tower and the crane on the left side of the screen.

The report also includes the full radar tracks for the helicopter that morning. Of particular interest is the final minutes of the flight. 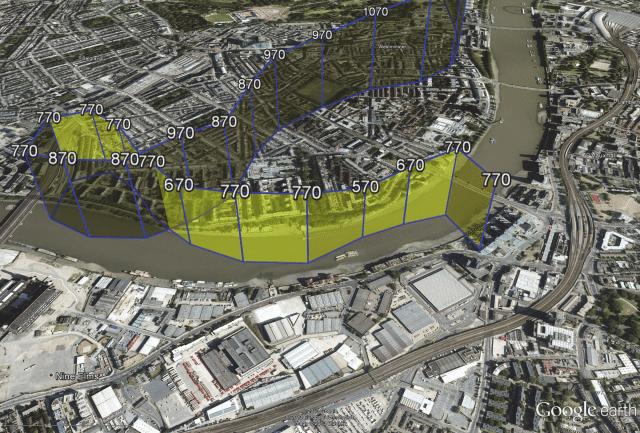 You can see how the aircraft turns to descend down over the Thames and then starts a right turn back towards Battersea. The turn back took him over the river bank and into the crane.

The Special Bulletin includes full detail of the wreckage and damage done to the helicopter and to the crane. It also includes a few quotes from relevant aviation publications including:

‘Non-IFR flights in the London Control Zone are not to be operated unless helicopters can remain in a flight visibility of at least 1 km. Non-IFR helicopters must remain clear of cloud and in sight of the surface’

‘The pilot of an aircraft on a Special VFR flight is responsible for ensuring that his flight conditions enable him to remain clear of cloud, determine his flight path with reference to the surface and keep clear of obstructions.’

So what happens now?

The AAIB will conduct a detailed inspection of recovered wreckage and helicopter maintenance documents, and an analysis of weather conditions. The investigation will also examine the conduct of this flight, regulation of flights over London, planning guidance and regulations relevant to development around aerodromes, and the lighting of obstacles.

I expect we’ll see more analysis of the weather and the heavy workload that the pilot was under (diverting, changing frequencies and turning) at the moment of the crash. A critical question will be whether his turn radius took him into the cloud. I won’t be surprised to see a fuss made over the text messages, there were a total of ten sent/received while he was in transit. However, the last text message was received by the pilot (and not marked as read) four minutes before the accident, so it does not appear to be related to the actual crash.