Sequence of Events in the Cockpit on Asiana Flight 214 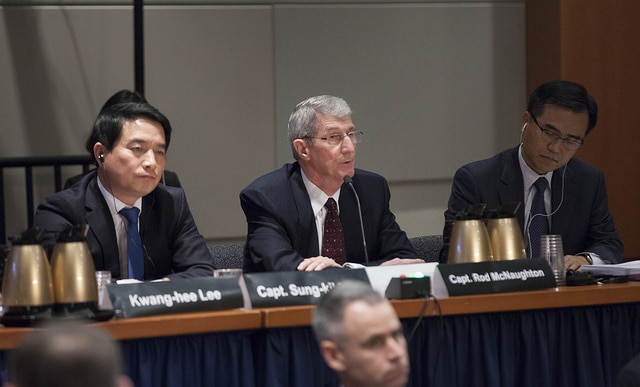 On the 6th of July 2013, Asiana Flight 214, a scheduled passenger flight from Incheon, South Korea to San Francisco, CA, crashed on final approach after striking the seawall a few hundred feet short of the runway.

The investigation is continuing but a key aspect of the hearing is the sequence of events, as presented by Bill English of the NTSB. His presentation is available on video and I have summarised it below. This explanation of the sequence of events in the cockpit makes it clear how the aircraft ended up much too low and too slow on final approach to San Francisco Airport.

A key issue I’d like to highlight is that the Captain was transitioning from a highly automated Airbus to a Boeing which allows for much more manual control by the pilot. This goes some way to explaining his confusion but does not in any way excuse why no one was watching the airspeed and why the instructor did not take control and initiate a go around much earlier.

Here’s the excerpt from the hearing as broadcast by Bloomberg TV:

The following is not a transcript but my summary of the presentation by Mr English with some clarification of acronyms and technical terms.

The departure from Incheon and the ten-hour flight were routine. The Boeing 777 reached San Francisco area with clear weather and light winds.

The flight crew were vectored for a visual approach to runway 28L as the glideslope portion of the Instrument Landing System was out of service. This had been announced by an FAA Notice to Airman covering the period of the 1st June through 22nd August.

The Pilot Flying was in the left seat. He was a captain transitioning from the Airbus 320 to the Boeing 777. He had 9,700 hours flight time with less than 45 hours in the Boeing 777.

The Pilot Monitoring was in the right seat. He was a newly certified instructor pilot with 12,000 flight hours and 3,200 hours on the Boeing 777.

There were two relief pilots on the flight. One of them was in the cockpit, sitting in the jumpseat.

After reporting the airport in sight, the flight was cleared for a visual approach for a 14-mile straight in final.

Air Traffic Control instructed the crew to maintain 180 knots until five miles out. There was no altitude restriction.

At this point, the aircraft was about six miles from the runway, flying at about 175 knots, descending through 2,400 feet, well above the glidepath.

The airplane approached the San Mateo Bridge, which is at about the Final Approach Fix point, five miles out. This means that at this point, the aircraft should have been at about 1,800 feet.

The Mode Control Panel (MCP) select altitude was changed to 3,000 feet to prepare for a possible go around, which is a normal action for an approach. This means that if you have to do a go around, the auto-pilot will automatically climb out to 3,000 feet.

Shortly afterwards, the airspeed select was set to 152 knots. The aircraft was still high, well above the desired glidepath. 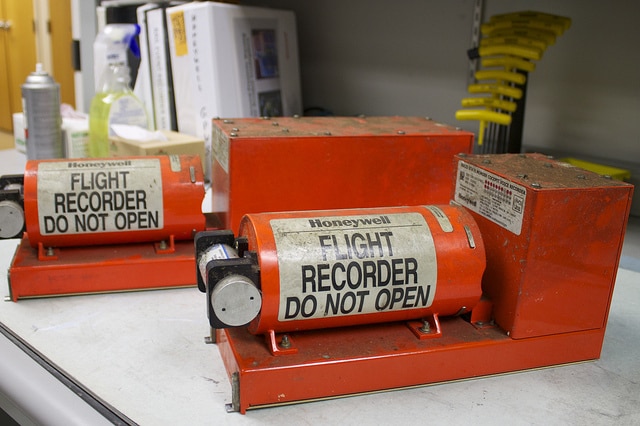 At an altitude of about 1,600 feet, at about 3.5 miles from the runway, recorded data from the cockpit indicates that the flight level change switch on the Mode Control Panel was activated.

This changes the autopilot and autothrottle operating mode. Flight level change is a autopilot mode normally used for altitude changes during the climbout, cruise and initial descent, but not as a part of the final approach. According to the Boeing Flightcrew Training Manual, it is not recommended for use past the Final Approach Fix.

As a result of this change, the autopilot (AFDS) began to command a pitch up and power increase as it attempted to climb the aircraft to 3,000 feet at 152 knots. That is, the aircraft is at travelling at low speed and now trying to climb to the altitude which had been previously selected on the Mode Control Panel in case of a go-around.

The pilot flying responded by disconnecting the autopilot and manually retarding the throttles to idle. In this configuration, the autopilot was not commanding the airplane, although the system made inputs to the flight directors because it was still in flight level change mode. The flight director computes and displays the proper pitch and bank angles required for the aircraft to follow the glideslope.

As a part of this configuration change, the autothrottle transitioned to hold mode with the thrust levels in the idle position due to the manual override. These modes were sounded on the Flight Mode Annunciator, which is meant to keep the crew informed about the system status.

The autopilot was no longer flying the plane. The throttles were set to idle. The autothrottles were no longer controlling airspeed. Despite this, the airspeed select was changed to 137 knots. This would have had no effect.

About five seconds later, the flight recorder data shows that the left side flight director was switched off, but the right side remained on.

About 1.4 miles from from the runway and at about 500 feet altitude, the Boeing 777 descended through the normal glideslope. It passed through the desired speed of 137 knots and was now rapidly decelerating.

The pitch attitude steadily increased as the pilot pulled back on the column, trying to maintain the correct glidepath as per the PAPI indicators. But with no power, it did nothing but slow the plane down even further.

There was no mention of the decaying speed on the cockpit voice recorder.

The thrust levers remained at idle. The aircraft continued to lose airspeed and sink below the glidepath.

24 seconds from impact, the airplane was .9 miles from the runway and at 300 feet altitude. It continued to descend well below the PAPI glidepath, decelerating through 120 knots and at a pitch attitude of about 7 degrees nose up.

At about 11 seconds before the impact, an audible alert consistent with low airspeed caution sounded through the cockpit.

Three seconds later, with the aircraft just below 100 feet above the water, the throttle levels were (finally) moved forward to full power to initiate a go-around. This was followed four to five seconds later by stick-shaker activation and a verbal call to go-around.

The action was too late and the main gear and underside of the aft fuselage struck the seawall. 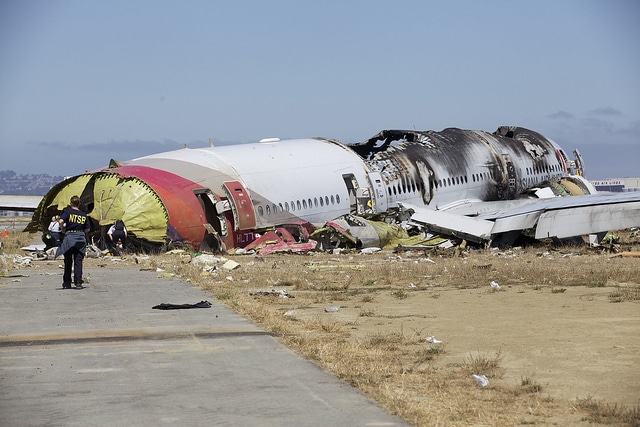 The lowest recorded airspeed was recorded at 103 knots which was about 34 knots below the desired airspeed.

Here’s the newly released video of the aircraft at the time of impact:

The tail of the aircraft broke off at the aft pressure bulkhead. 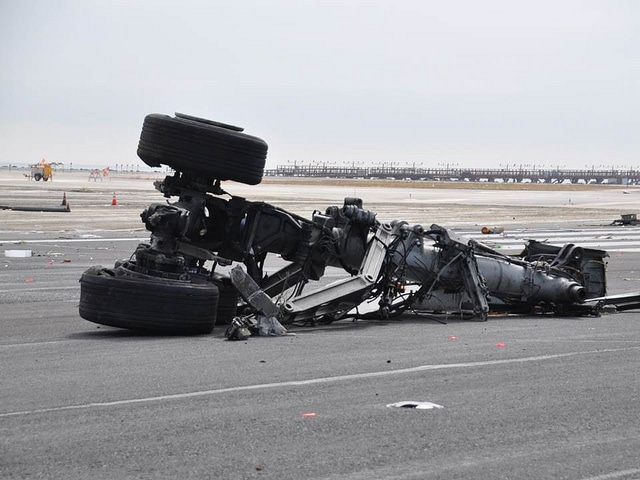 The aircraft slid along the runway before the fuselage lifted into an approximate 30 degree nose-down angle and pivoted 330 degrees, before coming to rest off the left side of the runway. 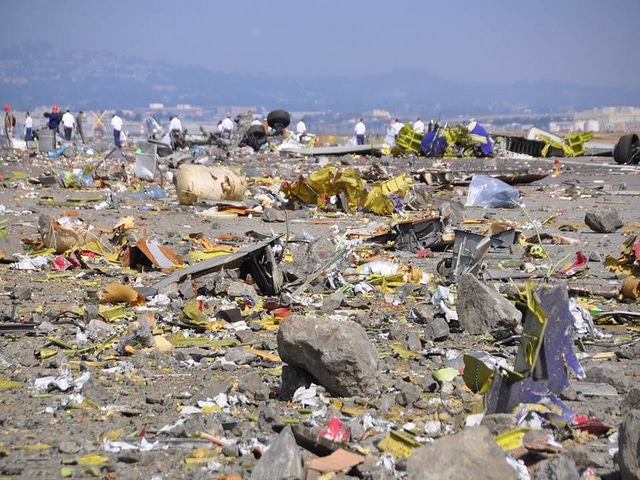 The NTSB has not identified any anomalies with the aircraft prior to impact. The investigation continues.

Leave a Reply to Yann