On the 12th of April in 2014, tragedy struck in New South Wales when a pilot’s bad decision led to the death of a young girl travelling with him as a passenger.

That morning, the pilot arrived at the airport at around 07:30 local time. He was well-rested and had no medical issues that might have affected his operation of the aircraft. His medical certificate had expired but when he was examined a few weeks later, there was no issue with a renewal.

He wore polarised sunglasses, unaware that both the Australian and US aviation authorities do not recommend polarised lenses when flying. Although they reduce reflected glare from horizontal surfaces, they can also mask the “sparkle” of light reflecting off shiny surfaces.

His aircraft was a Maule M-5, popularly known as the Lunar Rocket. It’s an American four-seater high-wing tail-wheel monoplane with a 235-horsepower engine. The pilot flew the M-5 several times a month.

The aircraft was hangared at Casino Airport in New South Wales, Australia. The pilot completed his pre-flight inspection: all was well with the plane. He then flew to Lismore airport to refuel.

The pilot planned to fly to Bonshaw, about 175 kilometres west of Casino, to visit a family member. He had arranged to pick up a work colleague at Murwillumbah who would accompany him for the flight to Bonshaw. At the last minute, they arranged for the colleague’s 11-year-old daughter to join them on the pleasure flight.

They departed Murwillumbah with the pilot sat in the front-left seat, his colleague in the front-right seat and the daughter in the rear passenger seat. The pilot helped her to adjust and fasten her seat belt through the rear cabin door, which is on the right of the aircraft. The pilot and front passenger seat each had a three-point seat belt with lap and shoulder restraints. The rear seats were two-point seat belts providing lap restraint only. At the time when the Maule M-5 was manufactured, shoulder restrains were not required for rear passenger seats.

The colleague has no recollection of the pilot briefing them about the use of seat belts but he understood that they were expected to keep the seat belts fastened throughout the flight.

The three of them departed Murwillumbah to the southwest shortly after 09:00. Initially, the pilot planned to fly to Bonshaw via Tenterfield. Once en-route, however, he changed his mind as they encountered strong headwinds and a lowering cloud base over the mountains. They landed at Tenterfield Aerodrome and the pilot discussed the issue with his passengers. He decided to track back east towards Ballina and take them to look at the Clarence River along the way. 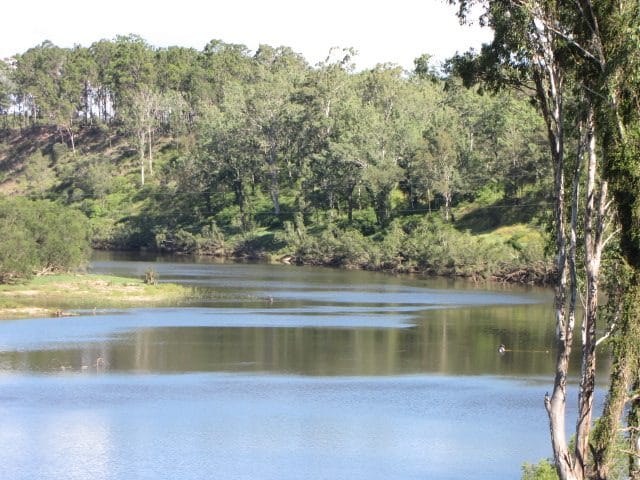 The weather improved. As they arrived at the Clarence River, the pilot descended to 800-1,000 feet above the ground. He tracked south towards a section of the river that he was familiar with, an area that he thought was called “The Cascades”. He scanned for power lines as he flew, spotting one which had been marked with high visibility markers.

They were just north of Baryulgil when he recognised the area he was looking for. He turned north and descended to tree-top height to follow the river back the way they had come. By now, there were only broken clouds in the sky and visibility was good. The pilot said that there was only a slight ripple on the water from the wind and the flying conditions were generally smooth. believes that he was flying along the river at about 100 knots (185 km/h).

An eyewitness who was about 5 kilometres north of the Cascades on the western bank of the river saw the aircraft. It was some time between 10:30 and 11:00. The witness noticed that the aircraft appeared to be flying at “normal speed” but very low. This would have been noticeable as an aircraft in normal flight must keep to a minimum specified height unless there are unavoidable reasons to fly lower or if the aircraft and pilot are approved for specific low-flying operations (for example search and rescue).

From the ATSB report:

Specialised training and endorsements are required to conduct approved low-flying operations. This training includes the relevant operating techniques and procedures to safely operate in a low-level environment, the procedures to follow prior to descending to commence low-flying operations, and identifying the types of ground-based infrastructure frequently associated with hazards such as powerlines. This includes power poles and the cleared easement that often exists in the immediate vicinity of a powerline.

In fact, the ATSB have collected data on the numerous low-flying accidents which they have investigated, of which a significant number both involved wirestrikes and proved fatal to the pilot and/or passengers. Of these, many were the result of unauthorised and unnecessary low-flying, where there was no operational reason for the pilot to be flying so close to the ground. They released what I’m sure is a riveting publication entitled Avoidable Accidents No. 1 – Low-level flying in 2010, which discusses seven accidents, of which only one had survivors. The second in the series, Avoidable Accidents No. 2 — Wirestrikes involving known wires: a manageable aerial agricultural hazard deals specifically with strategies developed to help agricultural pilots manage the ongoing risk of wirestrikes during spraying operations. And I know you’ll be thrilled to hear that there’s another half dozen in the series, although the rest don’t deal with low flying. My favourite title is Starved and exhausted: Fuel management aviation accidents.

The pilot was almost certainly aware of the restrictions. In Australia, the aircraft must be 1,000 feet above any city or populous area and 500 feet over the terrain or obstacles on that terrain in any other area.The pilot did not hold a low-flying approval and he had not received any low flying training. In this case, he should have been flying at least 500 feet above the trees, not at “tree-top height”.

They continued to track the river heading north.

They encountered a sharp westerly bend and the pilot pulled up, climbing to about 400-500 feet above the ground. Then he made a spur-of-the-moment decision to descend back down to tree-top height and fly further north along the river, although this included a section of the river that he was less familiar with. After the bend in the river, the west bank of the river was slightly higher than the eastern bank.

As he descended back to tree-top height, still banking left to follow the bend in the river, the pilot saw wires immediately ahead.

There were two power poles, one on each side of the river, holding two galvanized steel cables, each containing three wound strands of 2.75mm diameter wire, spanning the 665 metres across the river. They carried 11kV of electricity.

There was no aerodrome in the area and no expectation of low flying. The Australian standard only recommends the permanent marking for overhead cables that exceed a height of 90 metres (295 feet ).

But these cables were only 16 metres (53 feet) above the waterline on the eastern bank and 25 metres (82 feet) on the western bank. They did not require permanent marking. They were only about 6mm (¼”) in diameter and had become weathered and dull grey.

By the time the pilot saw them, it was much too late.

The left wing of the Maule M-5 struck the wires at two different points. The cables cut through the structure of the wing’s outboard leading edge, the mid-section leading edge and the wing support strut.

The cables did not break, although the power poles were damaged and a significant amount of cable was dislodged from the poles. A high-voltage protection device about three kilometres away detected a fault at 11:02 and isolated the power. 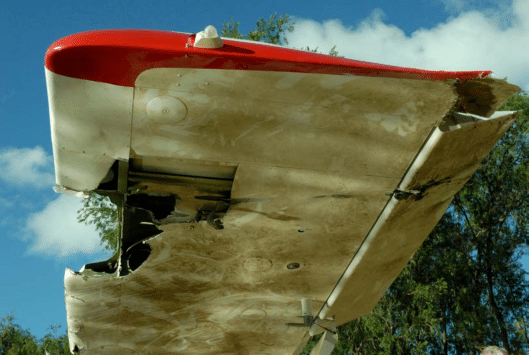 The pilot lost control of the aircraft and it crashed into the river. The windscreen shattered. The right wing folded rearwards, blocking the cabin door.

The aircraft came to rest upside-down, a short distance from the powerlines. The cockpit was inverted, fully submerged and flooded.

The occupants must have been terribly disoriented

The pilot was bruised across his left shoulder and both hips, consistent with the three-point seat belt. The passenger suffered serious injuries in the initial impact and both had bad chemical burns from the aviation fuel. The pilot was able to release his seatbelt and escaped through the forward-left cockpit door. The front-seat passenger also escaped the flooded cockpit, exiting through the forward-right cockpit door. The rear-seat passenger was still in the submerged cabin.

The pilot could not open the rear cabin door to get the rear passenger out, eventually managing to drag her out through a cockpit door.

The pilot and her father were unable to resuscitate her. She had died in the impact, breaking her neck. 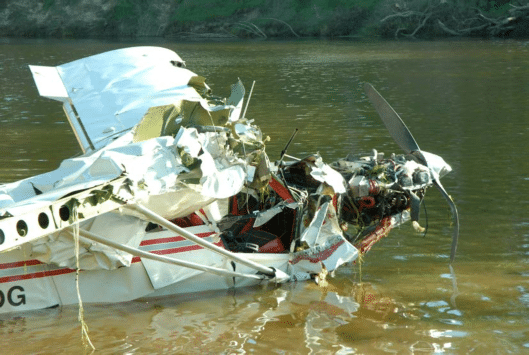 The pilot trekked to a nearby property to find help although it took hours for emergency services to get through. The front-seat passenger was winched to an ambulance helicopter and flown to Lismore Base Hospital. The pilot was taken by ambulance.

The Northern Star wrote about the incident:

“After a painstaking operation lasting all day, the plane was finally dragged from its resting place and towed upstream to a waiting truck at about 5pm. The job started about 10am from Yates Crossing – a shallow causeway about 3 km upstream – where a flat-bottomed SES boat borrowed from Lismore was launched into the Clarence to venture downstream to the crash site.

If he had been trained in low-level flying, the pilot might have noticed the powerline easement through the nearby scrub, or the the power poles close to each river bank.

The ATSB concludes with the following:

From the evidence available, the following findings are made in relation to the wirestrike involving a Maule M-5 aircraft, registered VH-HOG, which occurred 50 km west south west of Casino, New South Wales on 12 April 2014. These findings should not be read as apportioning blame or liability to any particular organisation or individual.

Contributing factors
The pilot made a spur of the moment decision to fly along an unfamiliar section of a river at very low level and collided with a powerline, which resulted in a loss of aircraft control and uncontrolled ditching.
Other factors that increased risk
The pilot did not hold any approval to conduct low flying, nor had they received training to identify hazards or in the operating techniques for flight close to the ground.
Other findings
The powerline was not fitted with visual warning markers, nor was there a requirement for such markers in accordance with the relevant Australian Standard.

The final report was released on the 12th of April, 2014. The pilot of the aircraft was charged with manslaughter, recklessly inflicting grievous bodily harm and endangering the life of another flying below 500-feet. In April 2016, he was sentenced to 15-months suspended jail sentence for reckless flying, having been acquitted of manslaughter. The front-seat passenger, the girl’s father, said in court that he wished that he had died with her that day.

A tragedy in every way.