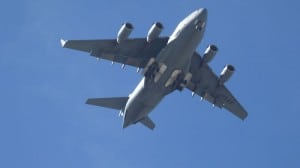 The plane was inbound from Southwest Asia with 23 passengers and 19 crew on board. The flight, over 15 hours long, may have led to the flight crew to being fatigued. The approach took place during daytime in full visual conditions.

Here’s the view of both airfields from Google Maps: The C17 managed the landing with a small amount of runway to spare, possibly a small consolation to the flight crew who chose the wrong airfield in the first place. An eye witness stated that the nose landing gear stopped about six to ten feet from the end of the runway.

The airfield was closed for a number of hours after the unexpected arrival of the C-17. 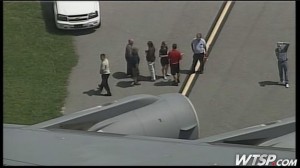 WTSP in Tampa has a gallery of photographs from after the landing. I suspect there were some pretty heavy conversations taking place.

A Boeing spokesman told FOX 13 that the plane would be able to take off from the short runway; however they suggested that the news channel speak to the Air Force for further comment on the situation (I can’t help wondering if they were sniggering). The Air Force does not appear to have made an official statement but the C17 was swiftly deployed to MacDill airfield later that day. It is not known whether the same flight crew were operating the aircraft.

p class=”clear”>In this footage of the departure posted onto YouTube, you can see just how oversized it is for the runway:

This is captured screen video of that US Air Force C-17 Globemaster that incorrectly landed at Peter O’Knight Airport yesterday. The air force flew it out of this tiny airport at dusk 07/20/2012. You can bet that was a career buster!

The approach plates for runway 22 at MacDill (PDF) include a specific reference to the opportunity for confusion.

So, it won’t have been the first time someone confused the two airfields. In fact, a user called The_Ginger posted to Base Operations military forums admitting that he had once almost made the same error:

I’d be lying if I said I haven’t been in this exact situation – here’s the setup:

It’s my no-shit first flight as AC. Alerted off of Bravo at one on a Saturday morning to help start AMC’s Haiti earthquake relief. We’re rounding all the people we can get to mission plan and stage at Pope – at least a third of them are drunk.

It’s pretty much chaos around the sq trying to get everybody together and manifested.

Sister squadron commander found me, tapped his watch and said, “There are people watching this”.

We get gone, drop everybody off at Pope, and eventually get our upload figured out ( 2 Humvees and pax) and push on to MacDill to RON and head for Haiti in the morning.

When we start the descent into MCF, it’s right around 12 hours since alert.

I have buddy as my co-pilot who upgraded shortly after this trip – he has a significant amount of commercial time.

We get vectors to the ILS 22. Right as the (false) glideslope comes alive, we get asked if we have the field in sight. Since Knight is sitting right about at a 3 degree slope, I think that’s the field and start the descent after we’re cleared for the visual approach. Tower clears us to land because they see us on final.

The eng calls the go-around at 500’A. We quickly re-orient and get on the real glideslope.

As we’re taxiing in – I get the infamous “phone number to approach” relay. Much to my relief…they asked what I was doing…I fessed up and they said “don’t do it again” and that was it. I thought I was about to set the record for shortest time as AC….

Edit: we even read and briefed the note on the approach plate. At that time, it was a bit different and didn’t specifically name Knight field.

Local news reports that neither the aircraft nor the runway were damaged.