Near-Miss with Only 19 Metres to Spare

Last week, there was a frightening near-miss on the runway at Shanghai airport. Although there is no official report yet, the details are available on the Aviation Herald incident page.

It was the 11th of October and the weather was clear with good visibility. China Eastern flight MU-5106, an Airbus A330-300, was a scheduled domestic flight to Shanghai Hongqiao from Beijing with 266 passengers on board.

The aircraft landed normally on runway 36R (the right-hand runway of two northbound runways at Shanghai). It departed the runway to taxi to the terminal, which involved crossing runway 36L (the parallel runway).

The second aircraft, China Eastern flight MU-564, was an Airbus A320-200 carrying 147 passengers for a scheduled domestic flight from Shanghai Hongqiao to Tianjin. It was ready for take-off on runway 36L. 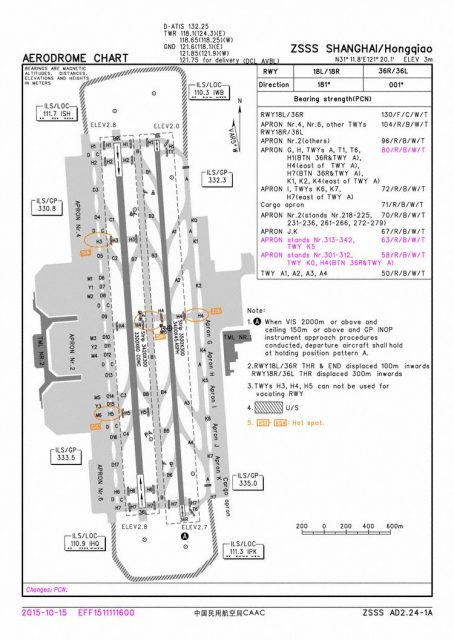 The departing A320 accelerated down the runway and was travelling at 110 knots (127 mph/204 kph) when the flight crew saw the other aircraft entering the runway to cross it. The first officer, who was Pilot Flying, touched the brakes. The captain took control and, with only milliseconds to come to a decision, decided that they would not be able to stop in time to avoid colliding into the A330 crossing in front of them. He decided their only option was to attempt to climb over it.

He pushed the throttles to the stops (exceeding the normal power for take-off, referred to as “firewalling the engines”) and continued the take-off run. The A320 take-off speed (V2) is around 150 knots but the departing aircraft didn’t have enough time to reach it.

VMU is the velocity of minimum unstick, that is, the minimum speed at which the aircraft can safely lift off the ground. The VMU of an aircraft is established in flight testing. Airbus aircraft are geometrically limited, which means that the testing VMU by pitching the aircraft up to the maximum actually involves the tail striking the runway.

From a flight crew’s point of view, the VMU is simply a figure used to derive other figures: the minimum velocity required for lift off, for example, must be at least 1.10 times VMU. Suddenly, though, this minimum figure was desperately important.

The crew continued their take-off run and at 130 knots, the Pilot Flying rotated. The A320 lifted off and climbed over the crossing A330. They crossed over the tail with only 19 metres (62 feet) to spare.

The flight crew ascertained that they were free of the obstruction and elected to continue the flight to Tianjin. They landed safely an hour and forty minutes later.

On Saturday, Aviation Herald posted a video reconstructing the accident which had apparently been shared with the media by the Civil Aviation Administration of China as a part of their investigation.

(As the video is filming the video on a monitor rather than a copy of the video itself, I presume this is unofficial)

Aviation Herald’s description of the video gives the numbers

As the A320 entered the runway for take-off, the controller called on the A330 to stop three times but did not receive a response. The flight crew apparently did not hear the call and clearly did not check whether the runway was clear before crossing it. After the incident, the cockpit voice recorder was found to be overwritten, so it isn’t clear what was happening in the cockpit as they entered the active runway.

It’s unclear to me how the cockpit voice recorder on a landing flight could have been overwritten as the aircraft did not continue from Shanghai. It taxied to the gate which did not take long enough to overwrite the incident on the cockpit voice recorder, which would have had at least 30 minutes recording time. The concern, of course, is that the flight crew intentionally erased or overwrote it.

The media also reported that, if the flight crew of the departing A320 had aborted take off immediately, they would have been able to stop within 475 metres (1,558 feet), which would have brought them to a halt 200 metres (650 feet) from the crossing A330.

Two hundred metres short of a crash is really not very much in an aircraft speeding at 110 knots and I find it hard to blame the flight crew for not feeling confident that they could stop in time.

The Civil Aviation Administration of China have made a statement suggesting that the incident was caused by negligence by the tower controller, who did not follow standard operating procedures. The A330 flight crew’s actions appear to be considered a contributing factor, as they did not respond to the radio calls to stop and did not check the status of the runway before entering it.

The Civil Aviation Administration of China acclaimed the captain of the departing A320, saying that he made “a great contribution with his precise and correct decision at a critical moment,” reports China Aviation Daily. They also report that two ATC staff have had their licences revoked and that the air traffic controller on duty has been suspended from the position for life, having forgotten the earlier crossing clearance when he cleared the A320 for take-off.

China Eastern Airlines announced that they plan to offer a reward to the captain for his quick thinking. They have not stated any plans for dealing with the crew of the crossing aircraft.

The Civil Aviation Administration of China expect to release a full report in twenty days.