Hijack by the Pilot – Ethiopia Airlines

At around this time, the Captain was locked out of the cockpit.

One passenger, Francesco Cuomo, told the Italian news agency ANSA that he and other passengers woke up shortly after midnight when the plane started to “bounce.”

“The pilot was threatening (the hijacker) to open the cockpit door and tried to knock it down without succeeding,” said Cuomo, a 25-year-old economist from Italy.

“At this point, a message was transmitted by the loudspeakers in poor English, but the threat to crash the airplane was clearly understood,” he added.

After entering the plane, I went to my seat: economy class, window-side and next to the right wing. As it was around midnight, I quickly fell asleep during take-off.

I was waken up an hour later due to the sound of all the oxygen mask going down. I immediately thought « what the… »

I looked at my neighbor, she seemed as confused at me. The plane was not behaving oddly so I thought it was a simple technical glitch or somebody pressed the wrong button. Everybody looked at each other, thinking what’s going on. Suddenly, a deep and angry voice talked through the cabin radio: “SIT DOWN, PUT YOUR MASKS ON, I’M CUTTING THE OXYGEN”, three times.

At this point, I realized that the situation is serious: someone is in the pilot cabin and has hijacked the plane. Within a few seconds, the oxygen went down in the cabin: I felt very lightheaded and quickly decided to put on the oxygen mask like the rest of the passengers. Quickly after that, the plane suddenly started dropping down for about 8 seconds then went fast back up, then finally stabilized. People were crying, yelling, praying. I was in complete panic.

I’m not clear what actually happened on the aircraft here and neither was OK3n, who said he wasn’t sure if the pressurisation changed or he was simply light-headed with fear. Certainly, it worked to get the passengers to remain in their seats.

The Italians scrambled to intercept the aircraft when it entered Italian airspace. The co-pilot spoke to the Italian Air Force while two Eurofighter Typhoons followed from behind, out of sight of the cockpit. 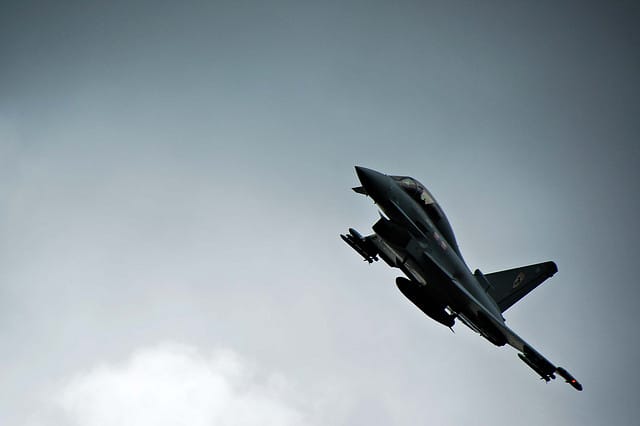 The co-pilot declared his intention to divert to Geneva to seek asylum. The Italians were joined by French military jets, who followed the aircraft into Switzerland to ensure the aircraft didn’t deviate from its flight path to Geneva.

Usually I try to insert a bit of witty commentary but sometimes I just can’t improve on reality.

Geneva (AFP) – No Swiss fighter jets were scrambled Monday when an Ethiopian Airlines co-pilot hijacked his own plane and forced it to land in Geneva, because it happened outside business hours, the Swiss airforce said.

But although the co-pilot-turned-hijacker quickly announced he wanted to land the plane in Switzerland, where he later said he aimed to seek asylum, Switzerland’s fleet of F-18s and F-5 Tigers remained on the ground, Swiss airforce spokesman Laurent Savary told AFP.

This, he explained, was because the Swiss airforce is only available during office hours. These are reported to be from 8am until noon, then 1:30 to 5pm.

“Switzerland cannot intervene because its airbases are closed at night and on the weekend,” he said, adding: “It’s a question of budget and staffing.”

He explained that French fighters can escort a suspicious aircraft into Swiss airspace, “but there is no question of shooting it down. It’s a question of national sovereignty”.

Meanwhile, on Airliners.net, the Civil Aviation Forum watched the events unfold in real-time.

It has just overflown its destination, FCO, at 36,000ft.. Hope things are ok onboard..

Aeroporto di Roma website says the flight hasn’t arrived yet, and it should have arrived at 4:40am local time. Hope everything’s okay…

Made a turn for Geneva.

I’m listening to LiveATC Geneva and I think I just heard the word “Asylum”!!

If I heard right they just said they have 35 min of fuel left.

Looks like they are doing another loop while waiting for authorities.

Still waiting for response from Swiss authorities?? Holding at 7000 with only 35 mins on board. The pilots are so calm yet.

Controller said everyone was sleeping so the delay…

“We have negotiators on the phone” as reported by GVA ATC.

think I heard: will give an answer on short final

Captain is leaving by the window. Does not looks like hijackers are in the cockpit

For a 767, 30 minutes worth of holding fuel is about 2000kgs. Looking at the timeline, they must have landed with less than 100 kilos in the tanks. Insane.

OK3n describes the situation on board:

I was thinking : that’s it, we’re crashing into something. Looking down to the window I see a light, two, three, I can’t see what’s ahead. It’s still dark. We’re going fast, we’re flying over many houses now. And suddenly, under us, the airport. Just thinking again about this moment makes me shiver. We are landing. WE, are LANDING. Is this true ? Is this a miracle ? We touched the ground, and the plane eventually stopped completely in a bit away from the plane entrance to the terminal. I remember crying, while most of the people (Italians) were applauding. At this point, for the first time in 6 hours, we got an update from the steward telling us about the copilot, that we are in Geneva and that soon the Swiss police will enter and evacuate the plane.

Here’s the tracking of the last ten minutes of flight with ATC conversation overlaid:

The co-pilot was identified as Hailemedhin Abera, a 31-year old pilot who had worked for Ethiopia Airlines for five years and had no criminal record.

Hailemedhin was raised in Bahirdar city, at the center of city called “kebel zero sost”. He attended school at Megabit haya sement elementary school, then Bahirdar Secondary School in 2000/01.

He was raised by a devotee Orthodox Christians family. Both of his parents are alive and residents of Bahirdar city.

There was nothing to suggest that Hailemedhin had any prior plan of creating an international incident – according to the conversations he had with his close friends a day before he left Addis Ababa.

The Boeing 767-300 eventually made its unscheduled landing at 06:00 local time.
The initial assumption that a hijacker had gained control over the flight crew proved to be false. The hijacker was the co-pilot, who had locked his Captain out of the cockpit.
“He parked the plane on the taxiway, he cut the engines then opened the cockpit window, threw out a rope and used it to descend to the tarmac,” said Swiss police spokesman Eric Grandjean.
“He ran towards the police and immediately identified himself as the co-pilot and hijacker.”

Over an hour later, the passengers disembarked.

The Swiss entered, released business class, released the crew, released the economy class. By released I mean go outside, hands in the air, and get checked by a bunch of policemen.

We were checked and accompanied very kindly by the Swiss. There were sandwiches, hot chocolate, and free wifi.

The Swiss police spokesman pointed out that it was the first time in Swiss history that a co-pilot had hijacked an aircraft.

/ˈhʌɪdʒak/
verb
illegally seize (an aircraft, ship, or vehicle) while in transit and force it to go to a different destination or use it for one’s own purposes.
“a man armed with grenades hijacked the jet yesterday”

I immediately balked at the term. The co-pilot was Pilot Flying and in control, so he can hardly be said to have illegally seized the aircraft. He diverted the flight, which he is totally authorised to do as the person in command of the plane. He also locked the Captain out of the cockpit and terrified the passengers but that’s not what defines a hijack.

After much pondering I decided that the best I could come up with was mutiny, as in open rebellion against a ship’s captain. But is that still a legal crime?

Luckily, the Swiss are more serious than I am and swiftly came up with charges. They have described the incident as an unlawful interference with an aircraft and 200 counts of kidnapping, under sections 183-185 which cover false imprisonment and abduction.

Geneva prosecutor did not discuss details of case. “Technically there is no connection between asylum and the fact he committed a crime to come here,” he said.

“But I think his chances are not very high.”