On the day of the accident, the captain woke up at 2am to drive to the airport. He knew it was going to be a tough, tough day. Although he tried to grab a few hours sleep in a chair in the pilot lounge, it wasn’t enough. Clearly fatigued by the end of the day, he still has no recollection of what happened that evening when he crashed the aircraft at Thomson-McDuffie County Airport.

Here’s as much as we can piece together. 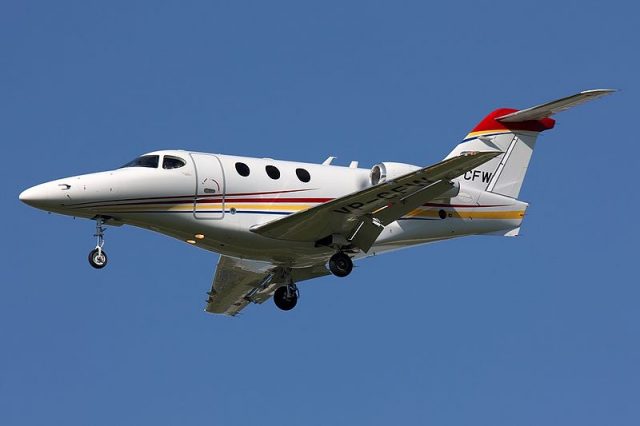 The aircraft was a Beechcraft 390 Premier IA, a light aircraft which competes with Cessna Citations in the private jet business.

On the morning of the 20th of February 2013, the two pilots left their respective homes at 02:30 EST and drove to Thomson-McDuffie County Airport (HQU), Thomson, Georgia, about an hour’s drive. The aircraft was already there and the pilots were to fly five passengers to John C. Tune Airport (JWN) in Nashville, Tennessee.

The aircraft with five passengers departed Thomson-McDuffie County Airport at 04:06 EST and arrived at its destination at 04:49 EST. [Although Nashville is in the central timezone, all timestamps are given in EST.]

At Nashville, the flight crew slept in the crew break room and completed paperwork. The captain would be flying the aircraft that evening (Pilot Flying). He normally got about 8 hours of sleep a night but because of the early start, he’d only slept five hours that night. He said he slept about four hours in the break room but his phone records show multiple outgoing calls throughout that period, so his sleep was at best fragmented. They left for a late lunch around 15:00 and then returned to the airport at around 16:30.

The two pilots walked out to the Beechcraft 390 around 19:15 for the flight back home. Five minutes later, the passengers were seen walking to the aircraft while one of the flightcrew did the walk-around. At 19:23, the aircraft taxied to the runway with the Pilot Flying in the left seat. They departed the airfield normally for their return to Thomson-McDuffie County Airport.

At 19:56, the flight crew told ATC that they were descending through 18,500 feet and they cancelled their IFR flight plan. The Pilot Monitoring said, “Ten thousand coming up captain and you blowin’ through.” He then told the Pilot Flying to adjust his altimeter.

The Pilot Flying’s response was worrying. “Say, I’m kinda out of the loop or something. I don’t know what happened to me there, but I appreciate you looking after me there.”

The flight crew contacted Augusta approach control at 20:00 to say they were descending out of 8,400 feet and had the airfield in sight. They then advised that they were switching to the local advisory frequency for Thomson.

The Pilot Flying flew an “S” turn along the final approach path. The aircraft was 1,000 feet above the ground and the approach was proceeding normally. The Pilot Flying lowered the landing gear.

At that moment, the Pilot Monitoring commented that the ANTI-SKID FAIL light had illuminated. That’s where it gets weird.

Pilots have a written checklist for a systems failure like this, which helps them to determine the proper flap setting for landing and apply the performance penalty in order to land safely. The anti-skid failure procedure for the Beechcraft Premier is quite straight-forward. The landing procedures specifically prohibited using flaps 20 or DOWN (30) if the anti-skid system failed.

With flaps set to 30, the aircraft touched down on Runway 10. Then the engines gained power as the aircraft accelerated and then lifted off near the end of the runway. Inside the cockpit, the take-off warning horn blared as the Captain said that he was performing a go-around.

No one was quite sure what was happening or why. The Pilot Monitoring called out to watch the pitch. The aircraft climbed to about 63 feet (20 metres) above the ground. Nine seconds after take-off, the left wing struck a utility pole and was ripped off. The aircraft continued to fly for about 925 feet (280 metres) before crashing into the trees. The aircraft struck the ground and a fire broke out.

All five passengers were killed in the impact by blunt force injuries. The passenger seats were detached and scattered among the wreckage. The seat backs and bottoms of all the seats were severely damaged. The wreckage debris path included sections of the pole and the attached power lines.

The gear was still down. The flap selector was set for 10 degrees but the flaps themselves were at about the 15 degree point, which implies that the flaps were in transit at impact.

The performance data directly before the impact was recorded by the EGPWS (Enhanced Ground Proximity Warning System) as a result of the aircraft performance exceeding a parameter. In this case, it was caused by an excessive bank angle, which was likely the moment when the wing broke off after crashing into Pole 48. The idea is that it saves the performance data covering twenty seconds before the parameter exceeded and ten seconds after. In this case, there are only twenty-two seconds of data, as the recording failed two seconds later when the unit lost power.

The saved data showed that the aircraft had lifted off near the departure end of runway 10 travelling at a calibrated airspeed of about 125 knots. The landing gear was never raised. The aircraft continued slowly accelerating and in a gentle climb. A rapid pitch up was recorded, from 10.5 degrees to 27.4 degrees. Then the aircraft rolled 71.7 degrees to the left.

The Pilot Flying’s seat was found near the remains of the cockpit, having been forcefully detached in the impact. Rescue workers cut the pilot free of the restraints.

The Pilot Monitoring’s seat was still in the cockpit and consumed by the post-crash fire. The pilot had escaped the cockpit before the fire and was found by a first responder driving to the accident site. He said that he saw him walking out of the woods, covered in blood. “Help me,” he called. The man drove the pilot back up the road and said that he did not appear groggy and his words were clear, though he smelled of jet fuel. Asked who the president was (to determine his level of alertness), the pilot answered correctly. When asked what year it was, he did not know. The first responder then asked him what happened and he simply repeated, “I overshot, I overshot, I overshot.” 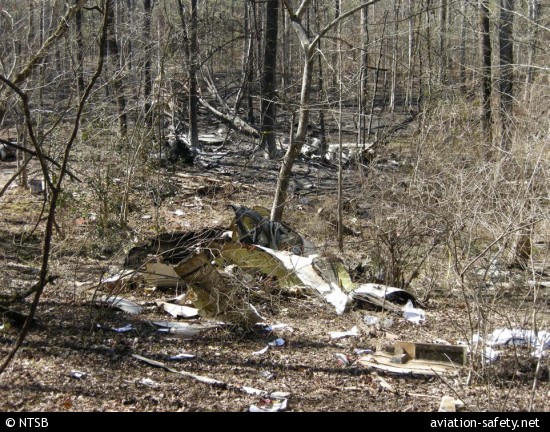 The utility pole should not have been there. It was Pole 48, a concrete utility pole located 1,825 feet east of the runway threshold and 50 feet left of the extended centreline. The pole was owned and maintained by Georgia Power, a regional electric company.

A utility pole located 1,825 feet east of the runway threshold should thus not exceed 46 feet. The FAA were happy that if the pole were lowered to 46 feet or less, it would not exceed obstruction standards.

The pole had been erected in 1989 but the FAA was never informed, thus the FAA had no record of the poles and they were not shown nor mentioned on the aeronautical charts.

If the pole had been 46 feet or less, the aircraft would have passed over it. The aircraft struck the pole at 58 feet above ground level, severing the left wing.

Having said that, the pole had been there for 24 years without anybody particularly noticing it; if the aircraft had climbed away correctly, it would have gone over the pole without difficulty.

It seems as though after touchdown, the captain must have recognised that the aircraft was not slowing as he expected it to and thus that it might not stop before the end of the runway. He must have decided to go-around rather than risk a high-speed overrun.

The problem is, neither pilot can explain what happened. They were both severely injured and neither has clear recollections of the crash.

The last thing that the Pilot Flying could recall was that he was checking the aircraft’s landing light switches to prepare for landing. After that, he remembers nothing until four days later, when he woke up in hospital. He had no recollection at all of the approach, the landing, or the decision to go around. He had the procedure for a balked landing out, which he said was not typical for him, but he could not explain why he had it out or, more importantly, why he hadn’t followed it.

The Pilot Monitoring’s recollections are only a bit clearer. There was nothing unusual about the glidepath on approach, although he remembers that they were one to two knots above reference speed. He also remembers that the aircraft touched down on the runway within 200 feet of the 1,000 foot runway-marker. He was ready to go through the after-landing checklist when the pilot announced that they were going around. He did not know why the pilot had taken this decision. He began monitoring the airspeed for the go-around. The engines sounded normal. The airspeed was 105 knots and they were approaching the end of the runway; he recalls thinking that it was going to be close. Then, he said, it seemed like something hit the airplane. He saw trees in the windshield. The next thing he remembers was someone pointing a flashlight at the accident scene.

Neither pilot has any recollection of the ANTI-SKID FAIL annunciator light coming on.

Using only the lowest braking action and no anti skid system operative, the aircraft needed about 1,560 feet (475 meters) to come to a safe stop based on the touchdown speed of 83 knots. With moderate braking, the distance needed to stop was only 1,350 feet. However, when the aircraft touched down onto the runway in reality, the Pilot Flying did not brake at all for the first 2,900 feet of the runway.

The Captain had gone through anti-skid system failure training as a part of his recurrent simulator training on the 4th of Jan, just six weeks before the accident. However, he didn’t react to the ANTI-SKID FAIL warning at all.

It appears that he had decided to go around directly after the aircraft touched down but was unable to execute it safely.

Instructors said that they discouraged students from executing a balked landing after touchdown on that aircraft and that typically the manoeuvre was taught to be performed at 50 feet above the runway on the approach. The captain confirmed that the only balked landings he conducted in training were while airborne. He differentiated, in fact, between a balked landing, done in the air, and a touch and go, taking place after touch down. The terms are actually synonymous and both refer to the decision to discontinue the landing and go-around. Using the captain’s definitions, he was clear that he’d never touched down before going around in the simulator and had never done so in the Premier.

Probable cause:
The pilot’s failure to follow airplane flight manual procedures for an antiskid failure in flight and his failure to immediately retract the lift dump after he elected to attempt a go-around on the runway. Contributing to the accident were the pilot’s lack of systems knowledge and his fatigue due to acute sleep loss and his ineffective use of time between flights to obtain sleep.

The original accident report is here on the NTSB site: