I’m feeling that I’d like a happy ending and this accident certainly fits the bill. It’s an amazing incident which ended well for everyone …well, except for the glider.

It happened last Sunday in Reno. Not everything that happens in Reno stays in Reno, apparently.

At around 07:30 local time that morning, a pilot departed Minden-Tahoe airport in a Schleicher ASW-27 glider. The ASW is a 15-metre-class German-built sailplane; the W means that it was developed by the designer Gerhard Waibel. It has a maximum speed of 285 km/h (178mph).

That day the weather was reportedly somewhat variable but a number of gliders departed from Minden that day and had uneventful flights.

I don’t know a lot about gliding but Japlopnik reports that the Reno area is “a kind of Mecca for glider pilots”.

Its unique location nestled at the foothills of the Sierra Nevada mountains creates the ideal location for flying a mountain wave. This oscillating wind creates a massive updraft on the lee side of the ridge, allowing powerless aircraft and their crew the opportunity to fly to extreme altitudes and record breaking distances.

While this mountain wave weather phenomenon requires stable air by definition, there are several hazards associated while flying in the wave. That’s the reason pilots always wear a parachute in the event that the aircraft breaks apart.

The pilot had had a full morning’s gliding and was returning to Minden when he encountered severe winds.

He was at around 14,000 feet and experiencing turbulence while the weather was closing in. He attempted to fly between two large clouds. The gap filled in quickly and he found himself in instrument meteorological conditions: in cloud with no visual reference.

The turbulence was severe. He said that he felt the glider stall and then it began to descend rapidly. The airspeed increased very quickly. Then he remembers hearing two loud pops.

At about 9,000 feet, the glider came out of the clouds and the pilot saw that he was in a spin. He attempted to recover. Then he realised that his left wing was missing. Out of options, he disconnected from the glider with his parachute.

Both of the wings had sheared off in the severe wind and turbulence. It is not clear if the glider exceeded its maximum turbulence penetration or if the wings were maybe fatigued leading to structural damage. 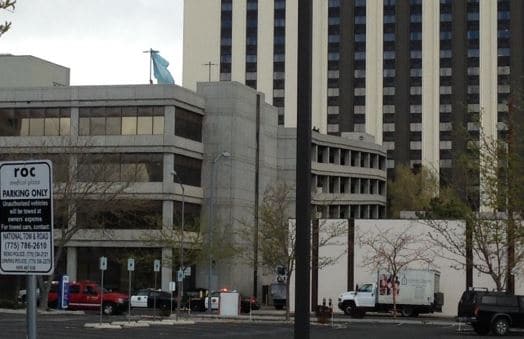 The pilot came down near Circus Circus just before 14:30 local time. It was a hard landing but he couldn’t be more perfectly placed. He landed on the five-story parking structure of St. Mary’s Hospital and was treated on the scene.

The fuselage landed in a nearby alley and caused some damage to parked cars. The left wing was found in Dick Taylor Park, about 2½ kilometres (1½ miles) from the hospital. The right wing has not yet been located.

The initial reports stated that the glider “experienced a malfunction over Reno”, which is an interesting way to describe breaking up in mid-flight.

Reno Police Department reported that the pilot suffered only minor injuries from the hard landing.

It broke both wings off and I had to get rid of the canopy and bail out.

Because you’re not inspecting as frequently as a commercial airplane is being inspected, it’s possible you don’t know about that fatigue.

So here’s the story: the pilot survived entering cloud and going into a spin leading to the glider breaking up with only minor injuries which were treated at the hospital he near as damnit landed on.

Hard to get better than that.