Giant 4241 Heavy, Confirm You Know Which Airport You Are At 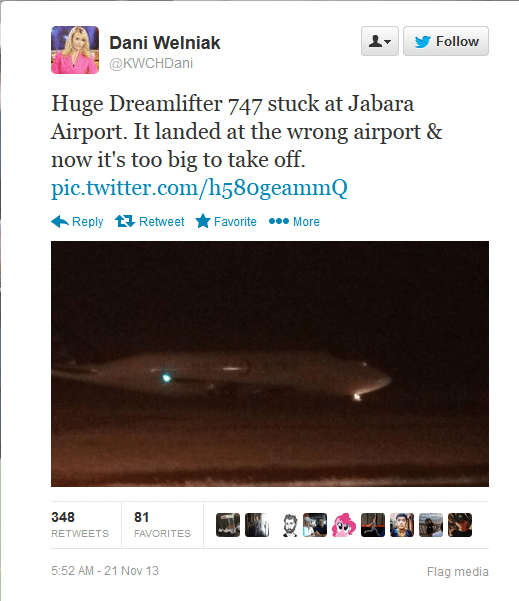 Last week, international news headlines were filled with the headlines of a Boeing 747 that landed at the wrong airport. Meanwhile, pilots all over the world cringed at the thought of making that kind of mistake and ending up in the media spotlight. But of course the question on most people’s lips has been, how could someone accidentally land at the wrong airport?

It’s not that uncommon. I wrote about another incident just last year at Oops, Wrong Airport. But what makes this one special is the transcript after they landed.

Let’s get to the details. The aircraft was a Boeing 747 Dreamlifter, a specially modified jet specifically designed to haul large cargo.

The Boeing Dreamlifter is a modified 747-400 passenger airplane that can haul more cargo by volume than any airplane in the world. It is the primary means of transporting major assemblies of the Boeing 787 Dreamliner from suppliers around the world to the 787 final assembly site in Everett, Wash. This reduces delivery times to as little as one day from as many as 30 days today.
Range: Dependent on payload but comparable to other members of the 747 family of aircraft.
Wing Span: 211.5 feet (64.44 meters)
Length: 235 feet, 2 inches (71.68 meters)
Height (fin tip): 70 feet, 8 inches (21.54 meters) 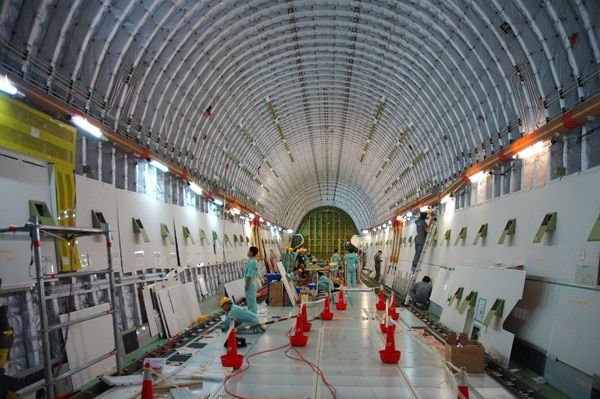 N780BA, operated by Atlas Air, was meant to be picking up B-787 fuselage parts in Wichita, Kansas that evening, for delivery to Boeing in Seattle, Washington.

However, despite what appeared at first to be a normal approach and landing, the flight crew actually landed at a much smaller general aviation airport: Col. James Jabara Airport.

A Dreamlifter is supposed to need a runway 9,199 feet long to take off at maximum takeoff weight, and 7,000 feet to land at maximum landing weight. The runway length at Jabara is 6,101 feet.

Colonel James Jabara Airport handles general aviation and air taxi traffic. It has a single concrete runway 18/36, which is 6,101 feet (1,860 meters) long. It’s named after James Jabara, an American pilot who served in World War II and the Korean War and was officially the first American flying ace: a military aviator credited with shooting down several enemy aircraft during aerial combat.

The aircraft, callsign Giant 4241 Heavy, was talking to McConnell Air Force Base tower frequency and reported they were inbound for the RNAV (GPS) approach on runway 19L.

You can listen to the transcript of the relevant calls as an MP3 on Kansas.com. It starts out as a normal GPS approach on runway 19L.

But somehow it swiftly goes wrong.

So, well, oops? There’s not a lot you can say to that, really.

So, BEC is Beechcraft Factory Airport, which lies between Jabara and McConnell. They aren’t at Beech Airport at all, but they don’t know that yet.

Here’s the lay of the land from SkyVector. 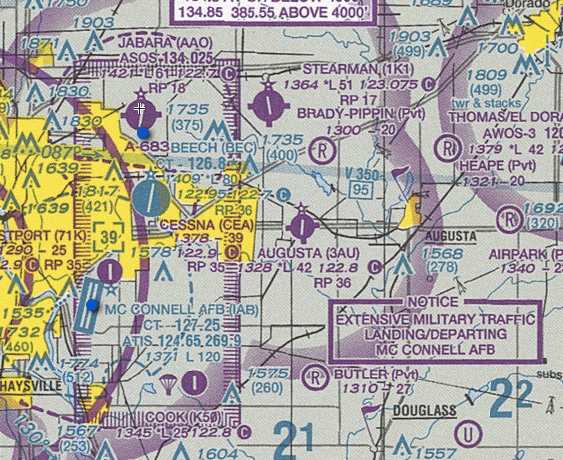 It’s about four minutes later when they speak up again.

Unicom frequencies are used at airfields where there’s no active control tower. They may be staffed by ground personnel who can offer advice. Local aircraft can also use the frequency to announce what they are doing, effectively keeping in contact with all other aircraft traffic in the local area. As the 747 is blocking the runway, it’s important that they have contact with other incoming aircraft.

The coordinates they are requesting are the longitude and latitude of Beech Airport.

The flightcrew of Giant 4241 is definitely flustered now, struggling to note the coordinates which are clearly not what they were expecting.

So, definitely not at Beech Airport.

McConnell Tower: Giant 4241 heavy… Did you do a circle around the airport and then land, or did you make it straight in?

I don’t think he really needs the answer to that question.

What a nice gentleman and a nice positive identification that they really are at Jabara.

The controller doesn’t sound confident that the flight crew know what they are doing… and who can blame him? They have not yet acknowledged that they are at Jabara.

McConnell Tower: Giant 4241 heavy, and confirm you know which airport you’re at.

This was maybe not the best way to inspire confidence.

Giant 4241 heavy: Sorry, I meant north. I’m sorry, I’m looking at something else. We are showing about six miles north of you.
McConnell Tower: Copy, six miles north.

I love how the controller sounds like he just can’t quite believe what’s happening.

I know, I shouldn’t laugh. But honestly! It’s hard to resist wondering why one of the flight crew didn’t simply get an iPhone out and check Google maps….

Flight crew is still not 100% convinced though.

*Thanks to the Redditor who corrected my transcript to WARUN, the final approach fix for the RNAV GPS approach on 19L.

So now they know where they are. But acceptance is only half the battle.

It’s important to remember that the runway they are on is only 6,100 feet and that aircraft can’t reverse.

In the end, Boeing delivered an aircraft tug from McConnell to Jabara to turn the 747 around. The tug drove down the local highway at 13 mph with a police escort.

For any pilot who has needed some navigation help from ATC (or has simply been corrected by ATC), the audio is familiar cringeworthy listening. The upside is that these pilots have set the bar rather high for future embarrassing communications with a controller.

To the great relief of everyone involved, the aircraft was not heavily loaded and not carrying much fuel. It would be able to take off from the short runway. The departure the following day went seamlessly. It should be noted that a different flight crew was given the job of delivering the aircraft to McConnell.

According to FlightAware.com, the aircraft departed Jabara at 13:16, arriving safely at McConnell Air Force Base 19 minutes later. You can see how they flew almost a full circle to reposition the aircraft at McConnell. Apparently the 747 only used about 4,500 feet of the 6,100 foot runaway to take off. 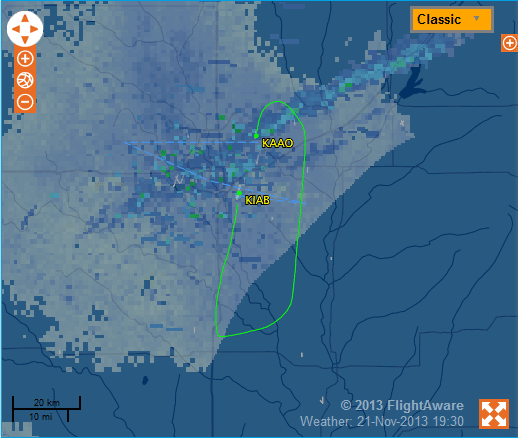 Needless to say, the NTSB is investigating.