Gear Up On the Runway Causes 1,200-Metre Skid

Lennart Meri Tallinn Airport (Tallinna lennujaam) is the largest airport in Estonia. It serves as a hub for Estonian airline Nordica as well as the secondary hub for AirBaltic and LOT Polish Airlines.

The take-off distance of the Antonov An-26 is around 1,250 metres (4,000 feet), less than half of the available runway at Tallinn at that time.

And still, somehow, it wasn’t enough.

Flight 3788 was a scheduled cargo flight operated by Exin Co. Ltd., a Polish charter airline. Exin was established in 1991 and currently operates two aircraft, both An-26s.

This is a photograph of SP-FDP taken by Mikko Mertanen in Helsinki just three months before the incident. 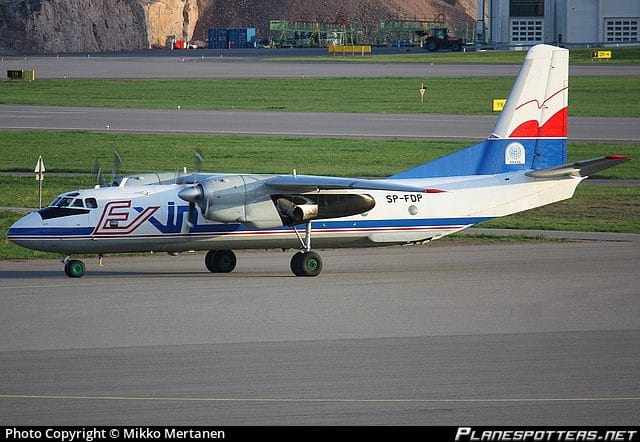 SP-FDP was an Antonov An-26B, a twin-engine transport plane with two turboprop engines and one auxiliary turbojet engine. The An-26 was designed and produced in the Soviet Union from 1969 to 1985 and was very popular as a cargo aircraft because of the retractable cargo ramp. The An-26B is the civilian cargo version of the aircraft equipped with roller gangs which can be swung up against the cabin walls when not in use. The two turbo-prop power plants deliver higher thrust than the standard model and an additional small turbojet adds thrust to act as a climb rate/high altitude cruise booster.

On the 25th of August 2010, the aircraft was scheduled for a cargo flight from Tallinn to Helsinki.

There were four crew on the flight deck: the captain, the first officer, the navigator and the engineer. The crew had been put together five days earlier. The flight engineer was new to the company and, before joining it, he’d had a three month gap in his flight activities.

All crew had passed the Crew Resource Management training given by the company in May-June 2010; that is, all of them had covered CRM training within six months of the accident.

The crew was based in Helsinki, where Exin had a guest house. Rest and duty time rules were observed. None of the crew members showed any signs of alcohol or medical issues which might have inhibited their ability to act as crew.

There’s one oddity though. The flight engineer said that, despite a restless night at the guest house, he slept about three hours in Tallinn before the flight and he felt fresh. The report also quotes him as saying that for no specific reason, he felt thoughtful during the accident flight and could not concentrate. That doesn’t sound like “fresh” to me.

That evening at Tallinn Airport, the first officer was the Pilot Flying.

After uneventful flight preparations, the flight crew taxied to runway 08, entering at the west end of the runway. They lined up for take-off. At 16:47:22 UTC, the aircraft began its take-off roll.

In aviation, we use V-speeds to refer to specific speeds that are critical to flight. These speeds vary from aircraft to aircraft and even flight to flight, so it is important to know what the monitoring flight crew member is referring to when calling out the speed reached on the ground or in the sky. There are two V-speeds relevant to this incident.

V1 is the speed beyond which the take-off should no longer be aborted.

VR is the rotation speed: the speed at which the pilot gently pitches the aircraft up, which causes it to lift off from the runway.

So on a normal take-off, the monitoring flight crew member, in this case the navigator, would call out when the aircraft reached V1 which means that the speed at which they can safely abort the take-off has been exceeded. On this flight, V1 was 182 kilometres per hour (98 knots, 113 mph).

Ten seconds later, the Pilot Flying initiated rotation. He pulled back on the elevator controls to lift the nose-wheel off the ground, so that the aircraft would lift up from the runway and take off (rotation). The elevator, which controls the pitch, was positioned to 17º and then released to 9.2º. The aircraft pitch angle increased to 4.6º.

That’s when the navigator made the V1 call.

So this is already a mess. The Pilot Flying started rotation long before the aircraft had reached the right speed. But even worse, the V1 call was early. At that point, the aircraft had reached a speed of 160.5 kilometres per hour (86 knots, 100 mph) which means the take-off could still safely be aborted. The calculated V1 was quite a bit faster: 182 kilometres per hour (98 knots, 113 mph).

When interviewed later, the Pilot Flying couldn’t remember if he’d heard the VR callout before rotation. He said that he rotated the aircraft “at VR or maybe a bit earlier”. Analysis of the Flight Data Recorder showed that the Pilot Flying started rotation at 144.5 km/h. Just to refresh your memory, the VR speed was 201 km/h. They weren’t even close.

It was at this point that the flight engineer called out Retracting! in Polish and selected the lever to bring the gear up. 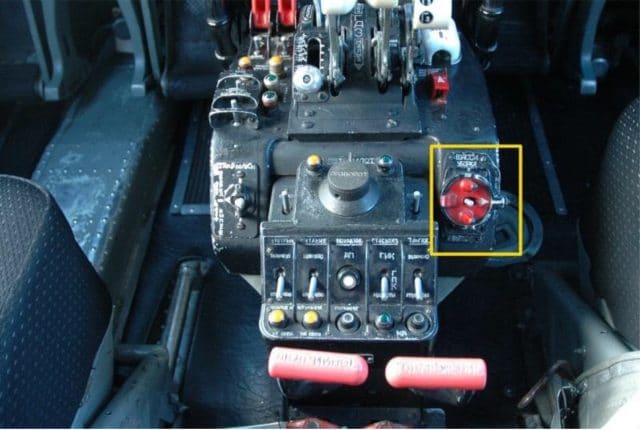 The landing gear control is located in the cockpit central console. The landing gear on the An-26B should not be retracted until the aircraft has at least fifty metres (164 feet) in altitude and an indicated airspeed of 230 kilometres per hour.

The flight engineer later said that he saw the Pilot Flying rotating the aircraft and clearly heard him command “Gear Up!”

Under normal circumstances, flight crew are prevented from retracting the landing gear on the ground.

When the landing gear is supporting the weight of the aircraft, the landing gear can’t retract: a Weight-on-Wheels switch blocks the electrical current so that the electro-hydraulic retraction system cannot operate. However, the lift on the wings during the end of the take-off roll can sometimes be enough to allow the landing gear to be retracted.

Although the aircraft was moving slowly and at this stage was not actually airborne, when the Pilot Flying pitched up, he would have increased the lift on the wings. It seems that this extended the landing gear struts to the point where the current was passed to the retraction system.

The control is not within the pilots’ field of view. Presuming both the captain and the first officer were focused on looking forward and scanning the instruments, they would not have seen the flight engineer’s action.

To be honest, by this point so much had gone wrong, I just can’t really imagine what they could have done to save the situation even if they had known.

Let’s look at all the calls that didn’t happen.

VR, the correct speed at which to rotate the aircraft, was never reached and never called.

Positive climb! (or in the US Positive rate!) is called when the aircraft is climbing away from the airfield at a safe velocity. Only after this call would the command to bring the gear up to be given.

Only one call-out relevant to the take-off was made, which was that the speed at which the aircraft take-off run could safely been aborted had been exceeded. And sadly, even that call was wrong.

As a sideline, there was a great thread on Airliners.net which asked what the opposite call was to Positive climb!. What would the call be if, after rotation, there isn’t a positive rate of climb. The following are my favourite answers:

The point is clear: if you have rotated correctly, then a positive rate of climb can be assumed; so much so that, in simulator training, flight crew being tested on their monitoring are caught out calling positive climb without actually checking first. Only after the positive climb call should the gear up call be made. And I can’t believe I’m even having to say this, but only after the gear up call has been made should the gear be brought up.

The accident report makes a similar seemingly banal statement on this.

Rotating at the correct VR will result in aircraft being able to take off and retraction of the gear will not result in runway contact.

So the aircraft was travelling along the runway, not having quite hit V1 but still travelling at a fair speed, when the wheels disappeared out from under it.

The aircraft obviously then slammed onto the ground to skid along its belly, although the report charmingly refers to it as “contacted the runway”, as if it were an old Facebook friend.

The aircraft’s belly was scraped and abrased. The tips of the propeller blades were bent backwards. The left bay door had bent to the left and partly broken off.

As crash landings go for a plane that hadn’t taken off yet, it was a pretty good one.

The core issue here is that the crew did not appear to be working together in any sensible way. The Pilot Flying initiated rotation without waiting for the call from the navigator. The navigator made the initial call early, which meant that he’d stated that the aircraft was travelling too fast for the take-off run to be aborted, whereas it was not too late. Based on the accident report, the captain appears to have done nothing at all. And the flight engineer, presumably triggered by seeing the Pilot Flying pull back on the controls, retracted the landing gear while the aircraft was still (barely) on the ground.

The crew had only worked together for nineteen hours, so they hadn’t had the time to become a team. The Pilot Flying had less than 500 hours experience on type and had trained on a different aircraft type. The flight engineer had only just joined the crew and had not flown for three months before taking the position. Although the records show that all of the crew had gone through CRM training within the past few months, clearly it wasn’t enough.

The accident report cites the flight engineer as the cause of the accident. There’s no question that it was his action which directly caused the aircraft to “contact” the runway. However, the instigating action was the Pilot Flying who initiated rotation without waiting for the VR call. The report also correctly calls out the CRM of the crew and the switch that allowed the gear retraction to be activated in the contributing factors.

The report concludes with a recommendation that the operator “set up and implement procedure with clear verbal exchange between pilot flying and flight engineer confirming the gear operations”. I find this odd, because this procedure already exists and the statements by the crew make it clear that they were aware of the call-out/response sequence, they just didn’t follow it. The second recommendation is more sensible, in that the operator should monitor and supervise their crew better to ensure that they are following procedures. And finally, they recommend that the operator look into the operation of the Weight-on-Wheels switch.

I am enjoying an extended stay in Tallinn and it occurred to me that I’d never written about an Estonian aircraft incident…or even read an Estonian accident report. So while I am here, I’d like to make up for this omission and share a collection of accidents and incidents with you. I hope you find the collection as interesting as I do.