Ever Left The Parking Brake On?

On the 22nd of December 2017, BMI Regional flight 1822, an Embraer ERJ-145EP (G-CKAG), was a scheduled flight from Frankfurt/Main in Germany to Bristol Airport in England. There were 22 passengers and three crew on board.

As the aircraft came in to land on Runway 27, it skidded off the runway and came to a stop in the soft ground next to the runway. The AAIB released their investigation last week and it’s an interesting case involving that embarrassing mistake that I suspect most car owners have done at least once: leaving the parking brake on.

The two flight crew consisted of a captain-under-training in the left-hand seat who was Pilot Flying and a BMI training captain in the right-hand seat, who was the commander of the flight and who took the role of Pilot Monitoring. They reported for duty at 05:40 for the flight from Bristol Airport to Frankfurt/Main and back.

The captain-under-training was new to BMI and new to the aircraft type; he had trained on a SAAB 2000 and had just 17 hours of flight time on the Embraer 145. As Pilot Flying, he planned and carried out a Category II approach and landing at Frankfurt without incident. Bristol was forecast for fog so, for the return flight, the crew again planned a Category II approach and landing. [NOTE: Please see comments below for more on this and clarifying my error and implication that the approach was planned before the flight as opposed to on approach.]

He started his approach briefing as they started their descent but, as they came into range of the ATIS broadcast for Bristol (offering current weather and runway conditions at the airport), he deferred the briefing to take in the details:

He resumed his briefing but was again interrupted as the flight crew received additional weather information, ATC instructions and cabin crew communications.

London ATC instructed the aircraft to descend to FL160 (16,000 feet) and reduce speed to 250 knots. The controller also told them to expect to hold for arrival at Bristol, that is, that they wouldn’t be able to route the flight in for landing immediately.

The flight crew changed frequencies to Bristol ATC. Bristol confirmed that the weather conditions were acceptable for an approach. Then, to their surprise, the controller advised them that they were number one (next) for the approach. As the Embraer descended through FL140, the controller asked if 30 track miles was sufficient distance, that is, whether they could descend and configure for landing for a more direct approach which would only cover a distance of 30 miles. The crew discussed this and agreed that they could, accepting the faster approach.

The Pilot Flying decided to deploy the speed brake to help them lose the excess height and announced “Speed brake coming on.” But according to the Flight Data Recorder, the speed brake was not deployed.

He completed the approach briefing and each pilot carried out a radio altimeter test. While they did this, the BMI training captain told the Pilot Flying that the quickest way to descend was to use speed mode and deploy the speed brake. The Pilot Flying acknowledged this and said that the speed brake was already deployed, but at that moment the training captain responded to an ATC call and didn’t seem to hear him.

After the call, the commander said outright that the speed brake needed to be deployed. “It is,” said the Pilot Flying, and then, “oh, no, it’s not. Who closed that?” He then deployed the speed brake, confirmed by the Flight Data Recorder, and asked the commander to request another five track-miles from ATC to give them some more time. 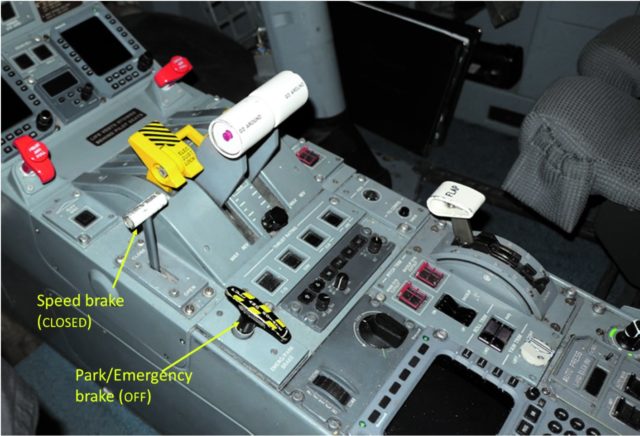 ATC routed the aircraft through the extended runway centreline to give them the extra distance before asking them to turn to intercept the ILS (Instrument Landing System) localiser from the south. The flight crew completed the descent checklist and the approach checklist was started.

The second item on the checklist read “SEATBELT SIGN ….ON”. The challenge and response system is that one person reads the item and the other person confirms the status. Instead, for some reason, the training captain read out “PARK BRAKE….” to which the Pilot Flying responded “ON.”

At the same moment, ATC instructed the flight to descend to 2,500 feet and turn right heading 360°. The crew followed the ATC instructions and then the training pilot restarted the approach checklist from the beginning, this time correctly with “SEATBELT SIGN….” in the second position, which the Pilot Flying confirmed was ON.

At 80 feet above ground level, the Pilot Flying disconnected the autopilot ready for a manual landing.

The Embraer touched down and the main wheels locked.

The training captain initially thought that the trainee might be “riding the brakes”, effectively applying brake pressure throughout instead of mindfully, a common error during training. He told the Pilot Flying to take his feet off the brakes.

On the Embraer ERJ145 (as well as the 135 and the 140), there is a steering tiller on the captain’s side which allows the pilot to activate the hydraulic nosewheel steering system. The Pilot Flying had been trying to use corrective rudder but as that was not allowing him to maintain directional control, he reached for the steering tiller.

The training captain saw the movement. “No, no, don’t use the nosewheel steering.”

The Pilot Flying also considered using asymmetric thrust to regain control but, later, he said that he didn’t think that he had moved the thrust levers. However, the thrust levers were advanced with slightly more left thrust than right, which was the last straw. The aircraft ran off the left side of the runway.

As the aircraft hit the grass, the training captain realised that the parking brake was on. The aircraft fishtailed left and right on the grass, continuing another 120 metres (400 feet) before coming to a halt. The Pilot Flying saw that the thrust levers had been advanced and brought them back to IDLE. Everyone took a deep breath.

Marks and rubber fragments on the runway defined the touchdown point, approximately 468 m from the threshold, and showed the aircraft initially tracking on the runway centreline before drifting first slightly to the right of the centreline and then veering left over 280 m.

Overheated fragments of vulcanised rubber were found at various points along the runway, with a cluster of larger fragments approximately 400 m from the touchdown point over an area of approximately 40 m by 3 m. After this point there were faint but reasonably clear lines left on the runway surface made by the wheel rims up to the point where the aircraft left the runway and continued onto the grass.

All four main wheels were buried up to their axles. But the aircraft was stopped and safe and the crew agreed that there was no need for an emergency evacuation. The Training Captain contacted ATC, saying simply, “We’re off the runway,” while the Pilot Flying made an announcement to the cabin to reassure the passengers and ask them to remain seated.

The controller activated the crash alarm and alerted the Rescue and Fire Fighting Services.

The Pilot Flying, as captain-under-training, realised that he must have set the parking brake when he originally meant to deploy the speed brake. But he still couldn’t recall having increased the thrust during the landing roll.

Investigators confirmed that the thrust levers were advanced shortly before the aircraft ran off the runway but were unable to establish if the Pilot Flying had increased them to try to maintain directional control using asymmetric thrust or whether it was a “biomechanical reaction” as the aircraft decelerated.

They also found that the parking brake indicator on the centre panel was only half lit, one of the filaments had failed.

It’s not clear from the above image; however, when the seat is in the forward position, the parking brake handle is not in the pilot’s sight, instead it is operated by feel. Embraer’s safety case had classified the severity of landing with the parking brake on as major but believed that the likelihood that it would happen was extremely improbable. But this was under the belief that it would happen due to a system fault, which had a likelihood as 1 in 109 flight hours. However, the safety case hadn’t considered the possibility of the parking brake being applied while airborne.

Embraer only knew of two other cases of landing with the parking brake set have been reported and neither was investigated as the aircraft did not depart the runway. The AAIB had also investigated a case in 2007, where the pilot had meant to select landing flap but set the parking brake on instead. All four mainwheel tyres deflated on landing but there was no further damage.

An interesting point to consider is why the training captain said “park brake” instead of “seatbelt sign” when starting the checklist. This would imply that he had the park brake on his mind, possibly having seen the illuminated parking brake indicator without taking it in. If they hadn’t been interrupted at that moment, one of the flight crew might have noticed the mistake and actually checked the brake.

The accident arose as a result of the inadvertent selection of the Emergency/Parking brake instead of the speed brake. The levers are of similar shape and sited close to each other but with a different appearance and mode of action. There is also a brake on indicator light. These risk controls proved ineffective in preventing the inadvertent selection of the Emergency/parking brake both on this occasion and on at least two previous occasions. Once the parking brake had been set there were opportunities to detect and correct the error, but a busy flight deck environment together with a high workload contributed to it going unnoticed.
After touchdown, the aircraft may have remained on the runway surface but for the addition of forward thrust during the landing roll.
The manufacturer stated that it did not intend to conduct a system review relating to the parking brake status.

You can read the full report on the AAIB site: AAIB investigation to EMB-145EP, G-CKAG.

The airport was closed for about 13 hours after the incident.

The aircraft was lifted out of the soft ground using a combination of hydraulic jacks and airbags so that it could be towed back to the apron. The only damage was to the landing gears and fairings.

BMI have since revised their Landing Checklist to include PARKING BRAKE ….OFF.