Last week, we looked at an accident in a business jet which ran off the runway during a failed take-off run. I tried to give you all of the information that the investigators would have had at the scene, although as Mendel pointed out, because I removed the date, I obscured the time of year, which was early spring-time in Oregon. The discussion on that post is great and I was very impressed at how quickly everyone pulled together the details.

I should also point out that this accident is not evidence of a decline in pilot standards; the accident happened on the 19th of March 1998 at Portland, Oregon. Nevertheless, as an example of shocking pilot standards, it is up there in my top ten.

I mentioned the aircraft was an Aerospatiale SN-601 Corvette, an aircraft that Rudy flew and knows wells. This one was registration N600RA, the 36th Corvette produced. It was originally registered and operated in France, before moving to Mexico and later the US. It was certified for US operations in July, 1994. 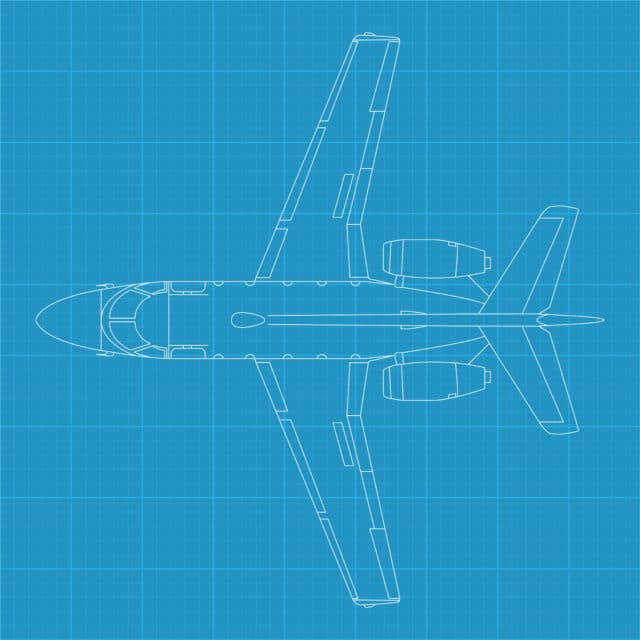 The aircraft seemed in fine shape after the incident and when the wreckage was examined on the scene, no fault with the two Pratt & Whitney engines could be found. The give-away was this:

The temperature difference only makes sense if the right engine had failed much sooner than reported by the pilot, who said that the engine failure occurred on the runway.

In the comments, Rudy highlights another clue even without the evidence of the oil temperature, which he spotted as he has substantial experience flying Corvettes:

The cockpit layout was impressive too, like a mini-airliner with some systems controls on the overhead panel. A large bank of annunciator lights was situated under the combing from left to right. Here is the first possible clue to the cause of the incident: The PIC mentioned a “generator warning light” as a first indicator of an engine failure. Which is b..sh.t. An engine failure would have caused a big red master warning to illuminate, as well as a series of lights on the annunciator panel. It virtually rules out a sudden engine failure.

Add to that the fact that the pilot decided not to mention the engine failure when he spoke to the NTSB:

Later he told the NTSB that everything seemed fine until he pulled back on the wheel at rotation speed. The next thing he remembered, they were sitting on the grass. He said he wasn’t actually sure what had happened.

Thus, things were not quite as they seemed. It seems clear that that the right engine of the Corvette had failed before the take-off run. However, that generates a slew of other questions, most of which start with why.

I also mentioned in the original post that the minimum flight crew for the Corvette is two pilots and that the pilot-in-command, who was also the pilot flying, was an experienced pilot and the director of operations for Redmond Flight Center, who was the operator of the aircraft.

The gentleman in the right seat submitted his log book and licence to the NTSB investigators after the incident; however, a brief inspection of his documents showed that he wasn’t rated for multi-engine aircraft. For some reason, he thought it was sensible to hand over over his Private Pilot’s Licence: his log book showed that he’d flown around 615 hours with 17 hours of multi-engine time (presumably training) with the most recent entry almost a year before the accident flight. He wasn’t flight crew, he was a passenger. When asked, he confirmed that he did not perform any copilot duties.

The other two passengers, who were seated in the back of the aircraft, ignored the NTSB requests to state their recollection of the accident sequence.

Their submissions were not actually needed.

An FAA safety inspector took possession of the CVR at the accident site and forwarded it to NTSB CVR laboratory in Washington, D.C. The CVR contained three channels of good quality audio information: the Cockpit area microphone, the captain’s radio/hot mike and the first officer’s radio/hot mike.

There, they found, (surprise, surprise!) that the audio on the CVR did not quite match the sequence of the events described by the pilot.

Let’s follow the sequence of events again, this time based on the CVR starting at four minutes to nine.

The transcript in the report then refers to the man in the right seat as the Copilot seat occupant, for lack of a better description of the unqualified private pilot who was presumably simply along for the ride.

There is the sound of the engine starter being activated a third time. Notably, there is no sound of the second engine actually starting.

Copilot seat occupant: At all. Fuel’s on, I take it.

The pilot contacts ground control and asks to taxi back to Flightcraft. You may recall that he didn’t speak to anyone at Flightcraft but phoned Redmond Flight Center to ask for another aircraft to be prepared and then cancelled his IFR flight for a VFR flight to Redmond.

Copilot seat occupant: Normally, like in the Cheyenne, when you start it, you see the fuel spraying. You know, it goes ch ch ch and it’s not even doing that, is it…

Pilot Nuh uh, it’s like we’ve got no starter.

Now I’ll cut to the chase and confirm that the pilot was correct and it was the starter-generator that had failed.

Copilot seat occupant: We’ve got two brand new ones on here don’t we?

Pilot: Well, I’d thought they’d replaced that one on the right.

The conversation in the cockpit continues for another minute, with the “Copilot seat occupant” asking about the operation of the starter-generator system and the pilot attempting to resolve the issue. Then the pilot shuts down the other engine and power was cut off to the CVR for a few minutes. The next sound on the area mike was the engine starter being activated for a fourth time.

Both the pilot and the Copilot seat occupant said “That’s that”.

Pilot: Well, I think it’s just the generator side; it’s not engaging the starter.

The engine starter is activated a fifth time and then twice more, while the Copilot seat occupant says “Hmmm.”

Rear Seat Passenger: Do you have to compression start it?

Someone laughs and then the pilot calls ground control for taxi. He received the clearance to taxi to runway 10L but about half a minute later, the pilot asks the controller to cancel the IFR clearance to Hermiston, that he instead wants to fly VFR to Redmond.

It isn’t clear who spoke next, clearly not the captain and most likely one of the two passengers seated in the back. But the question is an obvious one:

Unidentified passenger: Did you get the right engine started?

Unidentified passenger: Are you going to?

Pilot: I doubt it.

Unidentified passenger: It’s able to fly on one engine, isn’t it?”

Now, let me just briefly make the point that flying on one engine and taking off from a cold start on one engine are not the same thing. More importantly, this is one of those instances where, just because you can, doesn’t mean you should. We’re not talking about an engine losing power whilst hurtling full speed down the runway, in which case continuing the take-off would be a wise and sensible option, followed by landing as soon as possible. As they were currently safe and sound on the ground and parked on the Flightcraft ramp, there was no good reason to take the risk.

The cockpit voice recorder records the sound of the engine starter being activated for the eight time.

This is a really good question.

Pilot: Well, we’re not going to get anywhere sitting here.

Copilot seat occupant: We can have somebody bring the Cheyenne, can’t we?

Another really good question and one that the pilot had presumably thought about, as he’d phoned Redmond Flight Center five minutes earlier and asked about the Piper PA-31T Cheyenne. But he hadn’t asked for a pick-up. Instead, he’d told the employee to prepare the Cheyenne for flight, just before telling the controller that they’d be flying to Redmond instead of Hermiston.

The pilot ignores the question. Portland ground control calls to clear the pilot for the VFR flight to Redmond.

Pilot: [We] should be able to compression start it once it gets in the air.

It’s a shame the guy wasn’t actually flight crew, as at this point, he appears to be the only voice of sanity in the aircraft.

Copilot seat occupant: Why would… why would you say that? I mean, is there something that the air will do that you can’t do here on the ground?

Pilot: Yeah, it, uh, it turns the blades over.

Copilot seat occupant: When will…when will you start it?

Now, obviously it is possible to start, or more specifically to restart, an engine in the air. The Aircraft Flight Manual even tells you how to do it. It states that the N2 RPM must be greater than 50% to use the immediate engine relight procedure.

Skybrary helps to unpack that statement:

The N2 Indicator is a cockpit gauge which, in most installations, presents the rotational speed of the high pressure (high speed) engine spool, a speed that is referred to as N2. In a three spool engine, such as the Rolls Royce RB211, N2 is an indication of the intermediate pressure spool. The N2 Indicator is usually calibrated in percent RPM based on an engine manufacturer defined rotational speed that corresponds to 100%.

The point that I found much easier to understand is that the minimum airspeed for an engine relight without starter is 200 knots indicated airspeed.

The Corvette’s take off speed in normal conditions is around 125 knots, so relighting the engine as soon as they start rolling is never going to happen.

The pilot calls the tower to say that he is ready for departure. The tower clears the flight for take off on runway 10L at 09:17:01

The cockpit voice recorder records the sound of an increasing engine.

About a minute into the take off run, a horn begins to beep and continues to beep for the rest of the recording. A rumbling sound starts. The recording ends six seconds later.

Investigators from the FAA, accompanied by staff from Pratt & Whitney, who had overhauled the engine in 1994, removed the starter-generator from the right engine to find out what was wrong with it.

In the final report, the NTSB declared the probable cause of the accident to be the pilot-in-command’s decision to attempt to take off with the right engine inoperative, with a contributing factor of the fractured right engine starter-generator drive shaft.

It turns out there’s a specific accident code for operation with known deficiencies in equipment – attempted – pilot in command which would probably make for quite an amazing list of incidents.

Sadly, there’s no information on why the pilot was carrying these passengers in the Corvette, which was operated by Redmond Flight Center but not listed on their 14 CFR 135 operating certificate for the on-demand air taxi service. I suppose by then the NTSB had decided they’d spent enough time on this travesty and handed the remaining questions to the FAA to sort out.