Do You Listen to ATC if They Tell You the Weather Ahead is Bad?

One of my pleasures on a Friday morning is to read the posts in Professional Pilots Rumour Network (known as PPRuNe for short) and this morning was no exception.

I was intrigued by a post by a Scottish controller asking a question of the Private Flying forum. I recognised the name as a regular poster; I’ve always fancied that this is the same controller who helped me out when the weather descended upon my destination of Glenforsa (Isle of Mull) and I had to divert to Prestwick. He is generally friendly and calm so I was surprised to see this agitated post and preponderance of punctuation.

Do you listen to ATC if they tell you the weather ahead is bad? – PPRuNe Forums

If you’re told the weather ahead is poor by ATC would you listen or just disregard??

Yesterday I was giving a service to a light aircraft operating VFR as he tried to route back to his Scottish base…..Being the helpful sort of guy that I am I obtained weather ahead from airfields that he was liable to have to fly over….to say the least these reports were poor….the best OVC at 600ft and the worst OVC at 300ft…….on advising him of this info he tells me “No, it’s fine where I am” as he decides to press on!!! What would you have done???

The outcome could have been a lot worse I fear!!

OVC is overcast; the cloud level on this day was too low for safe visual flight.

Well, no, I would not press on in such a situation. To be honest, I found it amazing that a pilot would. Unless, perhaps he was IFR – that is to say, flying on instruments – and simply didn’t think to notify the controller?

I had a feeling in my water that his plan was to try to maintain VFR….with the weather reports I gave him I knew that would not be possible…but then I was not the pilot just the “Area FISO” trying to help him!

The reason I have posted this is to try and help people learn…….In this instance I handed the aircraft off to an aerodrome Radar unit as it started to become obvious to me that his planned route would take him through their class D airspace……in the end I am glad I did.!!

It took me a while to connect the incident to the Scottish Sun article I’d seen linked earlier.

Lost pilot asks ‘Where the heli am I?’ | The Sun Scottish News 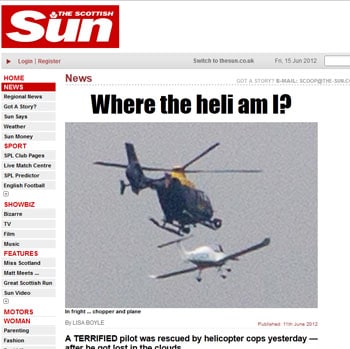 A TERRIFIED pilot was rescued by helicopter cops yesterday — after he got lost in the clouds.

The drama unfolded in the sky above Glasgow, after a cockpit failure left the pilot with no compass to work out where he was.

In a panic, he contacted flight controllers at Glasgow Airport who called in police to help the stricken Dyn-Aero two-seater plane.

Scores of people gathered on the ground below to see the demolition of the city’s Red Road flats looked on in horror as the Strathclyde force chopper came precariously close to colliding with the tiny aircraft.

One onlooker said: “The helicopter was flying only a few feet above the plane. They could easily have crashed.

“There were gasps from the crowd when people started noticing how close they were.

“It was really scary to see it from the ground. The poor pilot must’ve been terrified.”

The plane — on its way from Northampton to Perth — made an emergency landing at Glasgow Airport. A spokesman said: “The pilot was in radio contact with the control tower when he lost cockpit instruments including the compass.

The article is embarrassingly sensational and I have to wonder how you “lose” a compass, although later in the PPRuNe thread it’s clarified that he was believed to have lost his Directional Indicator. The aircraft itself was identified as a Dyn Aero MCR01 which is not permitted to fly in instrument conditions. The pilot certainly did not appear to have coped with the situation, even if he was licensed to fly with instruments.

I did think the current bun article was unfortunately funny.

The dirty Police pilot trying to mount an aero dyn in flight with a eurocopter.

I think a more usefull description would have been the police heli was shepherding a light aircraft back to safety.

And I would think the pilot was IFR and IFR being I Follow Roads.

The wonderful thing about the PPRuNe community is what a small world UK aviation is. Someone asked the question as to why the flight required a helicopter escort if he was simply lost. The response came from the pilot of the helicopter.

Ok just to give you some facts on this particular flight. I was flying Police51.

We were on task and asked by Glasgow ATC if we would be able to help an aircraft in distress that Edinburgh were working who had gone IMC between Glasgow and Edinburgh.

We transferred to Edinburgh approach as the subject aircraft radioed that he could now see some water below him and some ground and was going to decent.

Edinburgh vectored us towards the aircraft. He then announced that he was VFR again. Edinburgh asked him if he wanted to divert and he said yes. They said the weather was better at Glasgow, did he want to divert there and did he want our assistance. He said yes to both. We located him and offered him the option of following us back to Glasgow airport which he accepted. With local knowledge we led him over the least congested route to put him on a long final onto runway 23 at Glasgow.

When he was lined up and happy, we moved to the side and let him continue his approach to land.

I understand that when he went IMC his gyro toppled and Edinburgh were treating him as a ‘no compass no gyro’ aircraft.

All’s well that ends well but the weather was poor. I think I would have listened to [the controller’s] advice

You can read the full thread – currently at 10 pages – including interesting discussions of options in similar situations, air navigation rules for the UK. and, as the controller put it, “how far you can push yourself and still comply with the VFR rules”.

All in a day’s work for PPRuNe professionals!