On the 19th of April 2018, a Malinda Air scheduled passenger flight from Kathmandu to Kuala Lumpur rejected take-off and overran the runway. The Malaysian Ministry of Transport investigated and released their final report last month.

The aircraft was a Boeing B737-900 built in 2013, registered in Malaysia (9M-LNJ) and operated by Malindo Air, a Malaysian low-cost carrier based in Kuala Lumpur.

Tribhuvan International is located at the foothills of the Himalayas in Kathmandu Valley. It has an elevation of 4,395 feet with the Himalayan mountains along the northwest to the southeast of the airport, with high terrain ranging from 25,000 to 29,000 feet above mean sea level. The 10,000-foot tabletop runway has steep drops on either side.

The cabin crew arrived that day, working a flight from Kuala Lumpur to Kathmandu. It was a night flight back to Kuala Lumpur and the weather was poor. The flight crew briefing before the flight was focused on the weather and the engine out procedures at Tribhuvan.

An engine failure on take-off is always challenging but it is particularly problematic at Kathmandu because of the high terrain surrounding the airport. Normally, the Captain would then brief the cabin crew but after the event, the Senior Cabin Crew Member reported that the cabin crew had not received a briefing before the flight.

Other than this, the pre-flight activities seemed normal and no issues were found. The first officer remembers specifically that he physically checked that the speed brake was stowed correctly as a part of the departure review.

The captain was the pilot flying. He backtracked and started his take off roll at 228 feet from the threshold of the 10,000-foot runway, applying maximum take-off thrust. The aircraft swiftly reached V1, also know as “the decision speed”.

This is something of an odd name because really, it is the speed at which the decision is about to be taken out of your hands.

Once the aircraft reaches the speed after which a rejected take-off would be dangerous, the Pilot Monitoring calls V1. After this point, the Pilot Flying is committed to continuing the take-off. This is usually trained very stringently in the simulator after multiple studies that showed that most of the decisions to reject the take-off made at or after V1 were not necessary and in fact was more dangerous than taking off with the fault. Generally, if the aircraft is not going to be able to take-off and turn around safely, the situation becomes known before V1 is reached.

V1 is the minimum speed necessary to continue* in the case of an engine failure, so even in the case of a failure or an engine fire, it is safer to take-off. There are some instances where rejecting the take off in the final stages of the take-off run have been the safer option, but they are very rare and a runway overrun is pretty much assumed.

The flight crew said that just as the Boeing 737-900 reached V1, they were startled by the sound of the Take Off configuration warning. Some part of the aircraft was not set up correctly for take-off but it was not clear what the issue might be.

The captain reached for the speed brake to ensure that it was correctly stowed. The Take Off configuration warning continued.

The captain had no way of knowing what the configuration error was and he was taking off in the dark, in the rain, towards high terrain. He decided to reject the take off.

At the point when the Captain started the RTO manoeuvre, four seconds had elapsed since the 739 had reached V1 and the aircraft was travelling at 154 knots calibrated air speed.

The Boeing 737 flight crew operations manual procedure for initiating an RTO above 80 knots and before V1 says that the captain must, without delay:

If RTO autobrake is selected, monitor system performance and apply manual wheel brakes if the AUTO BRAKE DISARM light illuminates or deceleration is not adequate.

Apply reverse thrust up to the maximum amount consistent with conditions.

Continue maximum braking until certain the airplane can stop on the runway.

At the same time, the First Officer verifies that the thrust levers are closed, the autothrottles disengaged and maximum brakes applied. He or she needs to verify and call the status of the speed brakes and reversers as well as any action items which have not been done.

The aircraft skidded off the runway still travelling at 30 knots before coming to a stop in the soft ground about 50 metres (165 feet) after the threshold. 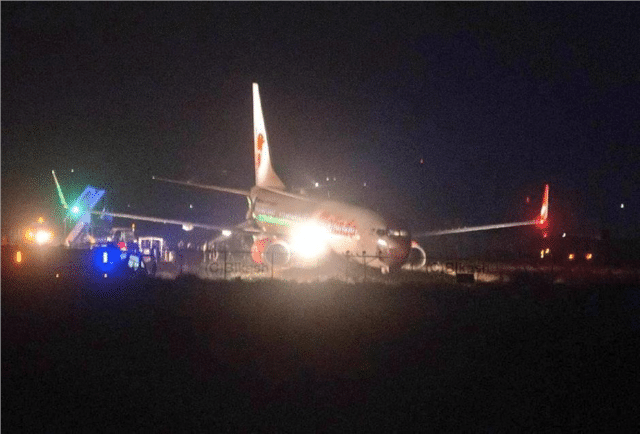 Once the aircraft came to a halt, the captain considered an immediate evacuation. However, the first officer pointed out that there were no indications of fire or malfunctions other than the Take Off Configuration warning. He suggested that an emergency evacuation was not necessary and the captain agreed.

The captain made a call to the cabin:

The senior cabin crew member repeated the announcement in the cabin. The passengers remained calm and did not panic. They mostly remained seated, except for one passenger who went to the aft galley to ask for a glass of water.

The flight crew started the auxiliary power unit (APU) and shut down both engines.

The first officer maintained communications with the tower. He switched on all of the external lights and, within a few minutes, the airport authorities arrived on the scene.

Steps could not be placed on the soft ground where the aircraft had halted, so they instructed the crew to disembark the passengers using the slide from door 2R.

The captain made an announcement to say that they were leaving the aircraft but that this was not an evacuation. The cabin lights were switched on and the cabin crew asked the passengers to move to door 2R, where they were to sit down and then use the slide to exit the aircraft.

Meanwhile, all of the passengers and cabin crew disembarked safely, with no injuries. The only damage to the aircraft was a flat tyre.

The captain was the last to leave the aircraft. He left the APU on and did not pull out any circuit breakers. The reason for pulling the circuit breakers is to remove power from the Flight Data Recorder and the Cockpit Voice Recorder. Both of these recorders have a limited amount of storage which is continuously overwritten. As a part of the emergency procedures, the flight crew are expected to disable the FDR and the CVR once safely on the ground and stopped in order to preserve the information. Even when shutting the aircraft down, the circuit breakers are often used so that if power is restored, for example by maintenance, the recorders are not activated.

However, the captain did not do this. By leaving the APU on, he left both devices quietly recording the silence until maintenance engineers arrived. 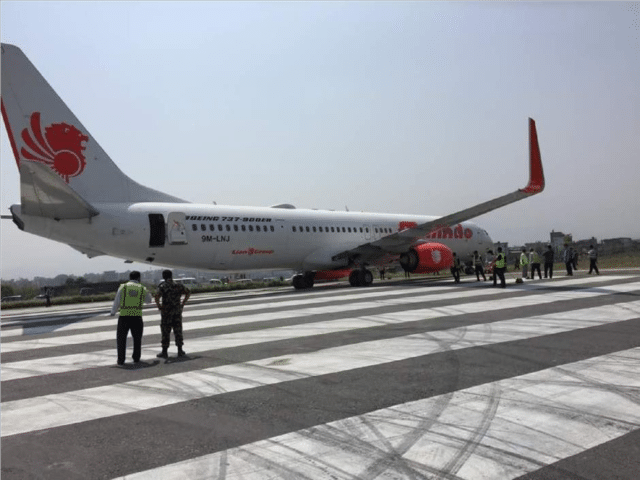 When investigators interviewed the captain, he confirmed that he knew “the 11 items to be considered to reject the take-off” as documented in the Quick Reference Handbook. However, he felt confident that his decision to reject the take-off after V1 was correct, taking into account the bad weather and the high terrain on their departure route. Taking off into the dark rain towards the Himalayas with an unknown fault on the aircraft must have felt like suicide.

Maintenance investigated the aircraft to find out why the Take-Off Configuration warning had sounded. They could find no faults. The systems report showed that the speed brake lever was not in the DOWN detent, that is, the fully stowed position. But both the first officer and the captain remembered checking the position of the speed brake lever and finding it correctly in the down position.

This was a known issue.

The maintenance team confirmed that the brake lever switch was out of range and thus giving an intermittent signal. After a minor adjustment to the switch, the aircraft take-off warning test passed with no further issues.

At the point where the captain rejected the take-off, the aircraft was travelling at a calibrated airspeed of 154 knots.

This information was not in the Malindo Air B737 checklist and it did not come up during the briefing. There were no instructions as to how to react if the Take-Off configuration warning sounded.

The probable cause of the runway excursion was due to the PIC attempted to reject the take-off at high speed, following take-off Configuration Warning. The rejected TO was initiated at the speed of 154kts, which is above V1. In addition, the maximum braking was not applied throughout the stopping.

The report concludes with eight safety recommendations, all for Malinda Air, which mostly come down to making sure that the pre-flight briefings and training include more and better information on rejecting take-offs and that training reinforce the importance of this and the importance of the Captain’s briefing to the crew, not to mention the importance of pulling out the circuit breakers after an incident. 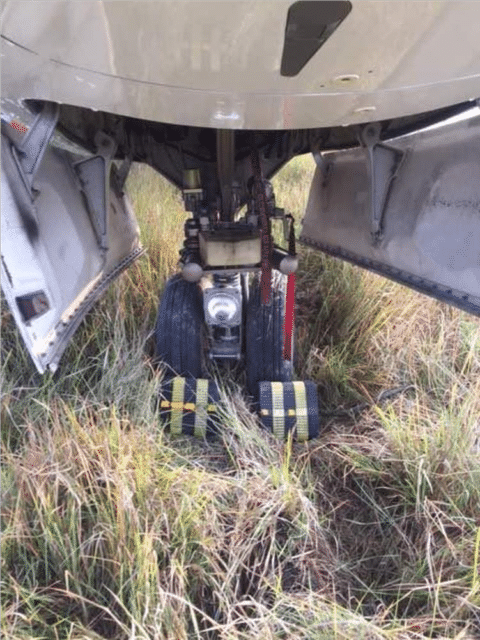 After the incident, Boeing were asked by Malindo Airways to supply the criteria and inspection needed to ensure that the landing gear fuse pin was in good condition after travelling along rough ground.

Boeing knew nothing of the incident and had not been contacted by the investigating body.

Their response to Malindo Air included Operational Guidance to clarify that V1 is the maximum speed at which the captain must take the first action to reject a take off. Having taken the decision to reject, the captain then did not use the full braking power available to him.

During the RTO, reverse thrust, wheel brakes and speed brakes were utilized; however not to their maximum capability which would have aided in reducing the airplane speed even further.

Boeing used the Quick Access Recorder (QAR) data and publicly available information such as the weather and the runway conditions that night to create a ground track and a performance analysis.

The analyses showed that if the captain had rejected take-off at V1 and executed the procedures perfectly, the aircraft could have stopped within 9,190 feet, leaving 817 feet of runway, even accepting the 228 feet behind the aircraft when it started its take-off roll. However, initiating the rejected take-off at 151 knots, ten knots over V1, required 10,289 feet stopping distance with no margin for error. The full runway length at Tribhuvan is 10,0007 feet. Even if the flight crew had done everything perfectly, they were never going to stop on that runway.

You can download the final report in English, including the Boeing response to Malindo Air, here: https://www.mot.gov.my/en/AAIB%20Statistic%20%20Accident%20Report%20Document/SI%200418%209M-LNJ.pdf.