Bit of a Fender Bender at Dublin Airport

You may remember my post about a previous incident at Dublin Airport, also involving Ryanair: Fear of Landing – “Where’s that Guy Going?” Runway Incursion at Dublin

That was the case where a Monarch crew took a wrong turn and blundered onto the active runway — right into the path of a Ryanair 737 on its take-off run. The Ryanair Captain initiated a high speed rejected take-off at 124 knots. By the time the Air Traffic Controller realised what was happening and shouted at the Ryanair to stop, the First Officer responded, we’re stopped. The Ryanair flight returned to the stand to have its brakes inspected. Meanwhile, the Monarch flight continued on its way, taking off three minutes later. That’s probably the first time ever I’ve felt sorry for a Ryanair flight for being late.

Stuck on a @Ryanair plane @DublinAirport clashed with another plane en route to runway – lost top of our wing! pic.twitter.com/uxVlTG84cX

The Daily Mail ran the story with a typically staid headline:

Passengers watched in terror as two Ryanair planes crashed into each other on the runway at Dublin airport.

Ryanair, on the other hand, referred to the ground incident as a “scrape”. A notice was posted onto their website that afternoon with the following statement:

There was no impact on customers on board and Ryanair contacted the IAA and worked with them to return both aircraft to stand. Affected customers disembarked, were provided with refreshment vouchers and boarded two replacement aircraft, which departed to Brussels Charleroi and Edinburgh later this morning.

The notice has since been deleted from the site.

The winglet or sharklet extends above and more recently also below the wing at the wingtip. They increase the performance for jets by reducing drag, which can mean a higher cruise speed or more commonly, better fuel efficiency.

Winglets reduce wingtip vortices, the twin tornados formed by the difference between the pressure on the upper surface of an airplane’s wing and that on the lower surface. High pressure on the lower surface creates a natural airflow that makes its way to the wingtip and curls upward around it. When flow around the wingtips streams out behind the airplane, a vortex is formed. These twisters represent an energy loss and are strong enough to flip airplanes that blunder into them.

But obviously the winglet isn’t going to survive impact with another aircraft’s tail. This photo taken by Niall Carson makes it look a bit more than a scrape, I have to admit. 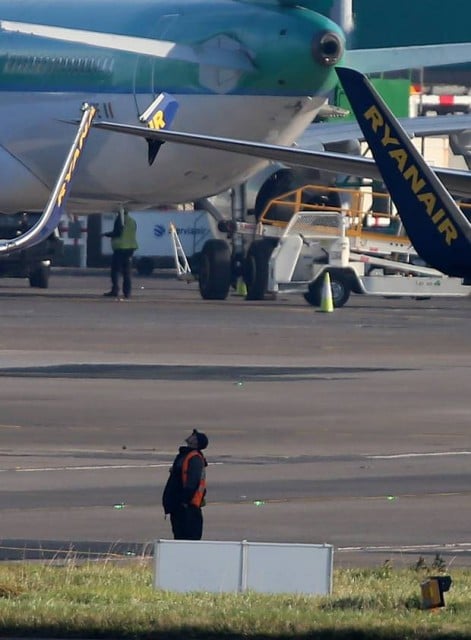 Irish newspaper accounts of the passengers show that they were somewhat bemused but not actually watching in horror or terror.

Andrea Cunningham, from Drogheda, was due to fly to Edinburgh for a job interview this morning and was a passenger on one of the Ryanair aircraft.

“We just kind of turned a corner and hit into another plane.

“It wasn’t a huge impact to be honest but you could see the plane shook and then it kind of just stopped.

“We were on the plane for about an hour, maybe short of an hour.

“We were just waiting to go back into the airport terminal,” she said.

It seems that visibility was poor and one aircraft was passing behind without quite enough space there. The ATC recordings make it clear that the flight crews involved were really not sure what happened in the moment. Note: if you are reading this from the mailing list, you may need to click through to get the audio file.

This photo, which I was unable to find an attribution for, gives good context for how it happened. 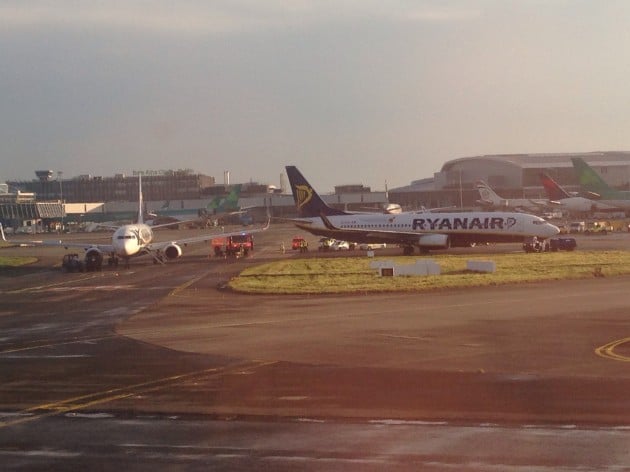 According to a poster on the Professional Pilots Rumour Network, this was an accident waiting to happen.

Dublin: 2 x RYR in contact during taxi. Both damaged.

I retired some years ago from 50 years of professional (accident free) flying and I was very familiar with Dublin Airport.

I am quite sure that dozens of us were aware that the south east corner of that airfield, after they built runway 28, was an accident waiting to happen. To say that this little corner, even on a CAVOK day, is busy, is an understatement.

In fact, I have just downloaded an IAA Aerodrome Chart (EIDW AD 2.24-1) which has, at the top left hand corner, an insert diagram entitled (in red) “Runway Incursion Hot Spots”. This shows the problem beautifully.

In the morning nowadays, departures are made from runway 28 and 34 simultaneously so that part of the airfield can get quite congested. If you want my opinion (and you probably don’t) my guess is that the aircraft holding short of 28 was being super-safe and holding back a bit further than normal. The aircraft heading for 34 tried to taxi past but mis-judged his wing tip clearance by about 10 feet.

Now, as an ex-DC-10 captain, I need to tell the great unwashed on this thread that it is quite impossible from the flight deck to judge where your wing tip is within 30 feet or so (see BA 744 at JNB).

My car beeps loudly when I’m backing up into something else, maybe the wing tips need similar sensors? It would at least make for some amusement.