Analysis of Crash Video from the Cockpit

Earlier this week, I linked* the following video of a 1947 Stinson 108 crash as seen from the cockpit:

This is unprecedented footage of a small airplane crash from inside the cockpit from two different views. Miraculously, everyone survived. The pilot will make a full recovery and the rest of us escaped with superficial injuries and feel very lucky to be alive.

This trip was much anticipated and due to our excitement we had our Gopro cameras filming at various times. After flying up into the mountains for a morning hike in the Frank Church River of No Return Wilderness we were planning on flying to a small mountain town for dinner. Due to warming temperatures there was an increase in density altitude and we had a hard time getting adequate lift.

After taking off we hit an air pocket that made us rapidly lose altitude, pushing us down into the trees. The cameras were left on for a couple of hours during the aftermath. Thank you to all the many individuals who eventually came to our aid and took the time and effort to help in any way they could. We appreciate you more than you know.

The aftermath: Two campers rushed there within about 15 to 20 minutes. They then went for help and found a retired paramedic and firefighter who came to our aid. About 50 minutes to and an hour after that a crew of fire fighters were driving through the area and somebody flagged them down. The fire crew cut down trees so a life flight helicopter could land. We really appreciated everyone’s help and effort. We feel very blessed to have had such great people respond so quickly.

The accident took place at Bruce Meadows Airport which has an elevation of 6,370 feet (1,940 metres). The maximum temperature reported for the region that day was 28°C/82°F which puts the airfield at over 9,000 feet density altitude.

70-year-old Boise pilot listed in serious condition after plane crash in Valley County
The pilot sustained serious injuries and he and one passenger were flown to the hospital in Boise by air ambulance. The aircraft was written off.

Meanwhile, the NTSB investigation of this accident is in progress, although the preliminary report has already been released.

On June 30, 2012, about 1405 mountain daylight time, a Stinson 108-3, N773C, was substantially damaged after impacting terrain during initial climb near the Bruce Meadows Airport (U63), Stanley, Idaho. The certified commercial pilot sustained serious injuries, and the three passengers sustained minor injuries. Visual meteorological conditions prevailed for the local flight, which was being operated in accordance with 14 Code of Federal Regulations Part 91, and a flight plan was not filed. The flight was destined for the McCall Municipal Airport (MYL), McCall, Idaho.

In a telephone interview with the National Transportation Safety Board investigator-in-charge, the passenger who occupied the right rear seat reported that after taking off the pilot flew straight out for about three or four minutes, but the airplane would only ascend to about 60 to 70 feet above the tops of the trees. The passenger stated that the airplane started losing altitude and experienced a downdraft, which was followed by its wings impacting the tops of the surrounding trees. The airplane subsequently came down through the trees before impacting terrain inverted and sliding to a stop.

Aki009 on Liveleak posted the following, based on the video: 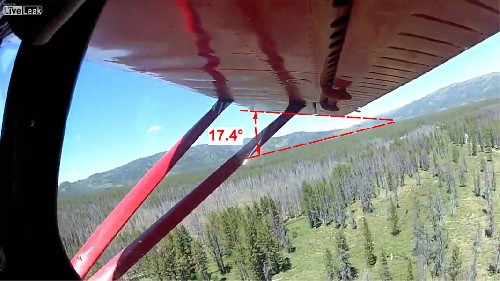 This image illustrates the problem the pilot had flying in high density altitude conditions. It appears that the pitch attitude is about 17 degrees, while the aircraft is not gaining altitude. Even if the measurement here is off by a degree or two, it’s obvious that the aircraft was flying just short of stall.

Note to self: if ever in a situation like this, land on the remaining runway; or land in the field before the trees; and try to crash as well as these guys did.

Redditor BinguniR34 did some homework on the weight and balance:

I am not one for making assumptions as far as verifiable data. I have just found a Weight and Balance spreadsheet for the Stinson 108 (accident aircraft). These are the numbers: Basic Empty Weight about 1400lbs. Max takeoff weight is 2150lbs. That gives you 750lbs of useful load.

Now, assumption of fuel load is needed: These Stinsons have fairly large engines, smallest option is an O-360. These engines burn on average 8-10gph. The trip that was to be flown is 44nm straight line distance, however with mountains in the vicinity, a more circuitous route may have been planned. I will assume an airborne time of at least 45 minutes. Which puts the absolute bare minimum required fuel at 1.25 hours worth (VFR reserve included). 12.5 gallons at 6 lbs per gallon, 75lbs.

Now, our useful load is brought down to 675lbs. Now, the FAA considers the average adult male to weigh 170lbs, with these numbers, the aircraft is already 5lbs overweight. The reality is, none of those guys looked like they were 170lbs or less. The three passengers look quite fit and fairly tall. I would place their weight at the very least 180lbs. The pilot, while not necessarily unfit, looks closer to 200lbs (remember, these are all clothed weights). With these updated weight numbers, the airplane is already 65lbs over gross.

Now, you must remember I used the bare legal minimum of fuel, the aircraft is capable of carrying 40 gallons, a full tank would add an additional 165lbs to the over gross figure. Additionally, I have not included any weight for baggage (I did not see any really, however, one guy is seen rummaging through the upturned aircraft) or equipment.

Well, chances are the aircraft was overweight… I have just found temperature information for the Stanley, ID area on June 30th, 2012, a high of 86F was recorded. I have no indication as to what the altimeter setting, and cannot make it out in the video either. If we assume that the typical good weather=high pressure, then we can assume a higher than standard altimeter setting. I used the current values, Temp, 86F (30C), alt setting of 30.00 and a dew point of 10C and field elevation of 6370. I got a density altitude value of 9556 feet! I am of course making assumptions, but I believe them to be fairly conservative assumptions.

All in all, those men were damned lucky to have survived.

* You can get the these links by becoming a friend of the Fear of Landing Facebook page and/or following @FearofLanding on Twitter. The latest link: How to Rescue a Goose with a Chainsaw

UPDATE: AOPA analysis including interview with the pilot: YouTube accident pilot: ‘I was going to abort’