There was a serious runway incursion at Brussels Airport on the 5th of October 2016, when an Embraer ERJ-195LR crossed in front of the path of a landing Airbus A320-214. The Belgian Air Accident Investigation Unit released their report last week and it’s a good study on how minor inconveniences can pile up into creating a big problem. 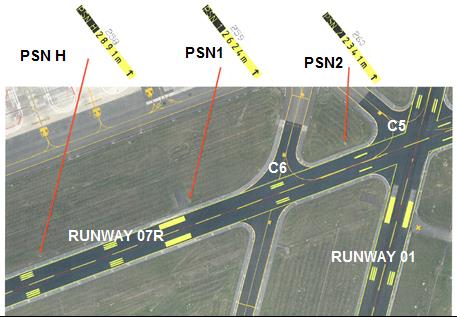 The departing aircraft was the Embraer ERJ-195. It was an Air Dolomiti aircraft and crew, operated on behalf of Lufthansa as flight DLH4TX from Brussels to Munich. The captain was Pilot Flying and the first officer was Pilot Monitoring and dealing with air traffic control.

Flight DLH4TX was running late and the flight crew requested a departure from the C5 intersection of runway 07R. This would save them some taxi time and still offer plenty of take-off roll. Ground control responded by giving them the route to the C6 intersection.

I should note here that Brussels is not known as the easiest airport to navigate, although I’ve never flown there myself. The first officer reported that his work load was high during the taxi operations in the dark in what he called an ‘unfriendly airport lay-out’.

Meanwhile, the Airbus A320, Aer Lingus flight EIN638, was on final approach for runway 01. 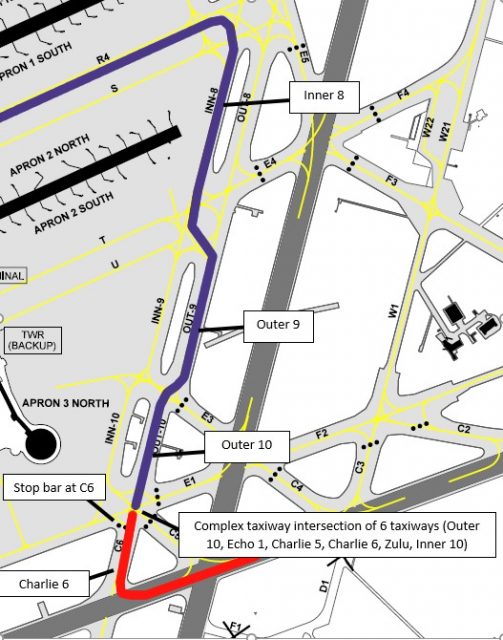 Flight DLH4TX taxied to the C6 intersection and stopped before the stop bar, which was lit. They changed to the Tower frequency and were told to line up and wait, which the first officer read back before the aircraft continued onto the runway.

It was the same controller speaking to both aircraft. Note here that the controller never mentioned the inbound A320 to DL4TX as an explanation as to what he was waiting for. At Brussels, it was standard to instruct the departing aircraft to line up on runway 07R and then wait for further instruction. The controller would wait until the landing traffic on runway 01 to pass the intersection and then would clear the waiting aircraft for take-off.

At this point, the crew of flight DL4TX had some issues lining up on runway 07R.

Taxiway C6 makes an oblique angle with Runway 07R. As this taxiway is parallel with active Runway 01, it is reported by other pilots that it provides a good wide angle to monitor the arriving traffic on the latter. On the other hand, aircraft have to make a turn of 120° when they line up in the direction of 07R.
One of the guidelines for aerodrome design in ICAO Annex 14 Attachment A and EAPPRI (and also in the ACI Runway Safety Handbook) is that runway entrances should be at right angles to a runway. This is because flight crew need an unobstructed view of the runway, in both directions, to confirm that the runway and approach is clear of conflicting traffic before proceeding to enter or line up.

The captain of the DL4TX found the taxiway centreline lights were not easy to follow. He asked the first officer if they were on the runway, unsure of their position. Both crew looked left and right and agreed there was no traffic in sight before making the turn and lining up on runway 07R.

The controller watched them line up, following standard procedure to maintain visual contact with any aircraft entering runway 07R from C6, as it is so close to the intersection of runway 01.

The Aer Lingus Airbus continued its approach, ready to land. And then everything seemed to happen at once.

18:40:50: Flight DL4TX lined up on runway 07R and immediately initiated its take-off run. They never saw the Airbus approaching.

The tower controller called out as soon as he saw the Embraer approaching the intersection.

18:40:59: The Aer Lingus crew also saw the aircraft on the runway starting to move forward and had already increased power to the engines, ready to abort the landing. They confirmed that they were going around.

The collision was averted but only because there was enough time to tell the Air Lingus A320 to go arund. 12 seconds had elapsed from the take-off roll to the resolution of the conflict.

The fact that DLH4TX did not start the take-off run 10-15 seconds later is just a matter of circumstances (chance). Would that have been the case, then the outcome was the exposure of EIN638 to the DLH4TX’s jet blast or a collision between the 2 aircraft.

Fifteen million points for coolness out of pressure. I’d have said three words, where the first two were ‘what the’.

The disaster was averted. 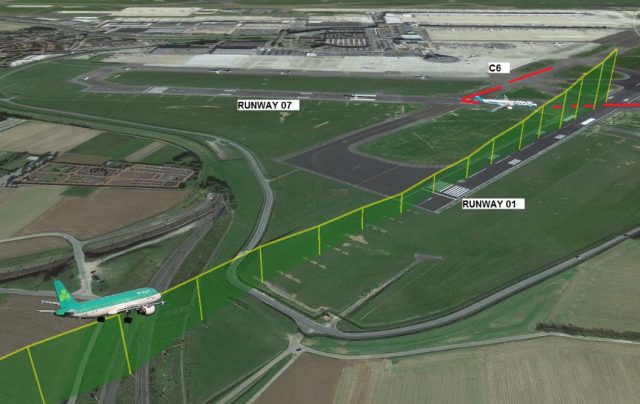 The situation we have here is initially easily blamed on the flight crew. The crew of flight DL4TX received an instruction to line up and wait, which the first officer repeated. They both knew that the next call would be to clear them for take-off. It took just a moment of confusion, as the crew tried to make sense of their position, to lose situational awareness. The captain wasn’t sure anymore if they’d been given a take-off clearance. The first officer, having expected it, became convinced that they must have had it already. And although the Aer Lingus A320 would have been clearly visible to them if they had looked, when they started their take-off roll, they focused on the runway ahead, not looking (or perhaps not knowing to look) at the approach for runway 01.

But it’s important to look at the wider picture. Part of the focus on human factors is accepting that mistakes do happen and understanding how and why they happen and what we can do to avoid and/or mitigate them.

From the literature on human factors, we can deduct that this kind of lapse is also related to the phenomenon of “expectation” in which the reception of a message is biased by the anticipation of actions to perform. In this case, the message received by ATC – stored in the short term memory of the crew – faded rapidly and the crew remained with the thought that they have got take-off clearance because they were cleared to get on the runway for the purpose of taking off. This determination can also be influenced by another phenomenon – the serial position effect, in which the human tends to recall the first and last words in a sentence and the instruction the crew received was “Line up and wait Runway 07R”, with the “wait” instruction sitting in the middle.

In this case, navigating the ‘unfriendly’ airport layout at night played a large role in distracting the flight crew. But also, it would have cost the controller nothing to refer to the crossing traffic when giving the instruction to line up and wait. This little bit of extra information would have meant the flight crew knew why they were holding. Instead of trying to remember if the controller cleared them for take-off, they would have been looking to see if the landing aircraft had passed them yet — much more difficult to get wrong.

The following is a posting of the the ATC communications at the time but I don’t know whether it has been enhanced or edited. Where the video transcript differed from the official transcript in the report, I used the report’s version. Also, bear in mind the quality of the radio by the person recording may not reflect the quality of the radio as received by the aircraft.

The report concludes with a long list of contributing factors, where any one of them might have averted the entire issue.

Cause
The incident was caused by the take-off without clearance of an aircraft instructed to “line up and wait” on Runway 07R while an aircraft was in final approach of Runway 01.

Contributing factors
* Not using a mnemonic and/or cross-check for the take-off clearance by the DLH4TX crew.
* Limited traffic information/situational awareness given when delivering ATC clearances.
* Inadequate doubt-clearing management in the cockpit.
* The unfamiliarity of the crew with the airport.
* Authorizing aircraft to line up on RWY 07R at a short distance from the intersection with RWY 01 without correlation with landing traffic on this latter.
* Intersection and status of RWY 01 not indicated on RWY 07R.
* The complex taxiway layout (junction connecting 6 taxiways right before C6, the oblique angled entry taxiway including a part of the taxiway centerline lights).

Numerous safety recommendations were made relating to the aircraft operator’s training, Air Traffic Control procedures and to the signage and layout of Brussels Airport itself. It seems likely that most of them will be implemented, another incremental step towards the safety of commercial flight.

The Aer Lingus A320 landed safely after going around. Lufthansa flight DLH4TX reached Munich without further incident. The tower controller had to be replaced for the remainder of the shift.

I’m not sure this needed to be mentioned in the incident report but honestly, I don’t blame him. It must have been difficult to block out the visions of Tenerife dancing through his head.

Edit: Fixed the timestamps as well as the spelling of Aer Lingus. Clearly I was a bit too much in a rush for this one! Thank you to those who let me know.